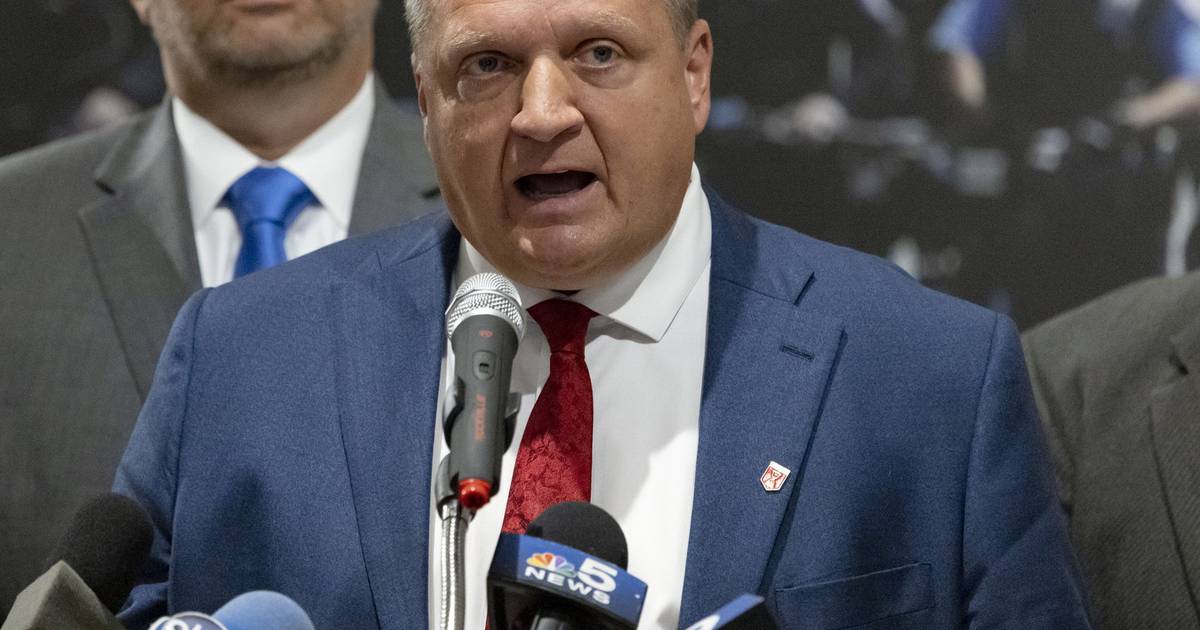 Republican attorney general candidate Thomas DeVore has lent his campaign $250,001, a move that opens the door to unlimited contributions in the race with first-term Democratic incumbent Kwame Raoul.

DeVore, an attorney from downstate Sorento who made his name with largely unsuccessful challenges to Democratic Gov. J.B. Pritzker’s coronavirus mandates, touted his decision to break the contribution cap in an email to supporters on Wednesday.

“I am all in for the fight against Kwame Raoul, JB Pritzker and the overbearing political class that protected power at the expense of hardworking families and businesses in this state,” DeVore said in a statement. “I’m all in for the people of Illinois.”

Under state law, contribution limits are lifted when one candidate for statewide office gives their campaign more than $250,000. Until then, limits range from $6,000 for individuals to $239,900 for political party contributions to statewide candidates.

The move to lift contribution limits in the race is a gamble for DeVore, who prior to the loan had raised just under $122,000, including previous loans he made totaling $28,500, state campaign finance records show. DeVore started July with less than $16,000 in his campaign fund after winning a GOP primary in which he was vastly outspent by one of his two opponents.

Raoul, who was unopposed in the Democratic primary, had more than $1.1 million in the bank at the beginning of July.

Because contribution limits have been lifted for both candidates, Raoul’s campaign account is now open to unlimited contributions from key Democratic backers such as labor unions and civil attorneys, as well as more substantial financial support from Pritzker, the billionaire Hyatt Hotels heir who has pledged to use his personal wealth to help elect Democrats up and down the ballot.

Pritzker’s campaign did not respond immediately Wednesday to a request for comment on whether the governor plans to help fund Raoul’s reelection effort. But Pritzker’s campaign fund gave Raoul nearly $3 million in his 2018 race, including $1.9 million in the final month before Election Day.

Raoul said in a statement that he hasn’t had “any discussion with the governor regarding political contributions.”

“While our offices operate independently of each other, it is safe to say that we have mutual admiration for the bold leadership we have each displayed during these challenging times,” Raoul said.

Sign up for The Spin to get the top stories in politics delivered to your inbox weekday afternoons.

For DeVore, an outspoken critic of the Republican establishment in Illinois, the question is whether any wealthy donors or interest groups will rally behind him.

Uihlein on Monday gave $1 million to the Republican nominee for governor, state Sen. Darren Bailey of Xenia, a DeVore ally. During the GOP primary, the founder of the Uline packaging supplies company gave $9 million to Bailey’s campaign.

A pro-Bailey political action committee called People Who Play By The Rules, headed by right-wing radio host Dan Proft of Naples, Florida, received $20 million from Uihlein in July, on top of $8.1 million ahead of the June 28 primary. The independent expenditure committee is prohibited by law from coordinating directly with any candidate.

Uihlein did not respond to a request for comment on whether he plans to increase his support for DeVore now that limits have been lifted.

As for whether he anticipates more support from Uihlein or other wealthy donors, DeVore said in an email Wednesday that he “would never expect anyone might make contributions to our campaign.”

“We are grateful to anyone who contributes no matter the amount,” he said. “I contributed the money to my campaign as we are committed to helping the people of Illinois. We will be grateful to all others who may choose to support our campaign at any level.”