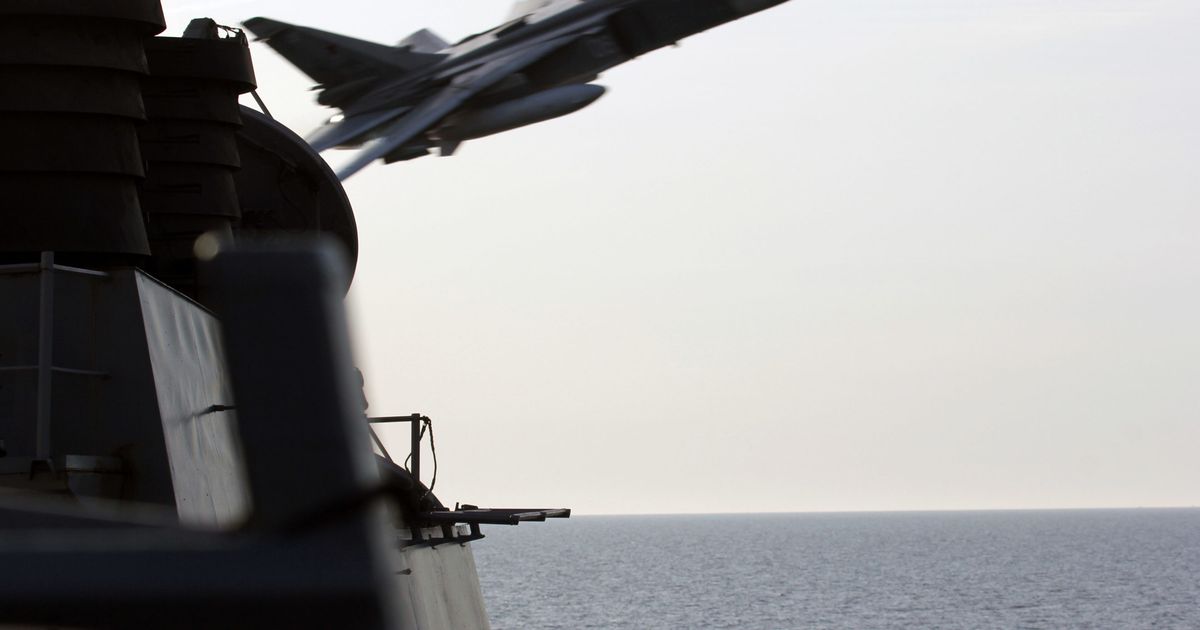 Press play to listen to this article

KYIV — Blasts that rocked a Russian military airfield in forcibly annexed Crimea signal the start of Ukraine’s counteroffensive in the south and a critical new phase of the war that could shape its ultimate outcome, two Ukrainian officials told POLITICO.

The series of explosions Tuesday sent huge fireballs and mushroom clouds of black smoke into the sky, scattering terrified Russian vacationers who were seen in videos shared on social media scrambling for safety on a beach and fleeing by car over the Crimea bridge to Russia.

Moscow downplayed the blasts, saying they were caused by ammunition that had accidentally detonated at the airfield, where satellite images showed several military planes had been parked.

Ukraine’s defense ministry coyly denied responsibility while warning about the dangers of smoking around explosives, and President Volodymyr Zelenskyy said “this Russian war against Ukraine and against all of free Europe began with Crimea and must end with Crimea — with its liberation. … I know that we will return to the Ukrainian Crimea.”

But two Ukrainian officials who spoke to POLITICO suggested more directly that Kyiv was behind the explosions. While Ukrainian forces have in recent weeks been pushing to claw back ground toward the southern city of Kherson — which fell to the Russians in the early days of the invasion — the two officials said the explosions at the airfield indicated that this counterattack was now beginning in earnest.

A successful strike against a military target far behind Russian lines, and especially on the Crimean Peninsula, a place of great significance to the Kremlin that has largely avoided the intense fighting taking place on Ukraine’s mainland, would be deeply embarrassing for President Vladimir Putin who would likely view it as a dramatic escalation and a blow to his troops’ morale.

“The Kremlin has little incentive to accuse Ukraine of conducting strikes that caused the damage since such strikes would demonstrate the ineffectiveness of Russian air defense systems, which the Ukrainian sinking of the [Russian flagship] Moskva had already revealed,” wrote the Institute for the Study of War, a U.S. think tank that tracks the conflict.

Asked by POLITICO whether the blasts can be viewed as the start of Ukraine’s counterattack in the country’s south, a Ukrainian official, speaking on condition of anonymity because they weren’t authorized to speak to reporters on the record, responded in the affirmative.

“You can say this is it,” the official said.

A second Ukrainian official, who also spoke anonymously because they were not authorized to speak to the media, told POLITICO that August and September will be “very important” months from a military perspective, which would likely shape the ultimate outcome of the war.

The official warned that the intensity of the fighting in August and September could “look like February” but declined to elaborate on that assessment, citing military secrecy.

The official said that the airfield blasts were a message to Russia that they “are safe nowhere.”

“Let them know how it feels,” the official added, referring to the fear and uncertainty that has spread across Ukraine, where Russia has fired more than 3,000 missiles since February 24.

The Washington Post, citing a Ukrainian government official, reported the attack was carried out by special forces.

On Wednesday, Ukrainian Air Force spokesperson Yuriy Ignat said in an interview on Ukrainian state TV that the Saki airfield in the town of Novofedorivka, as well as other Crimean military airfields, was home to Russian jets that carried out airstrikes on Ukraine, the Interfax-Ukraine news agency reported.

“That’s why putting any airfield out of order is a very good thing,” he said, without explicitly confirming Ukraine was responsible.

The air force reported on its Facebook page that nine Russian aircraft had been destroyed.

The full extent of the damage caused by explosions at the Crimea airfield remains unclear. But any number of military planes destroyed would make a dent in Russia’s air forces that have been attacking targets in Ukraine.

A one-second video published on social media that could not be independently verified by POLITICO appeared to show at least one Russian jet completely destroyed and a firefighter hosing down an area of the damaged airfield.

Tweeting another video that seemed to show the aftermath of the blast, Anton Gerashenko, a Ukrainian Interior Ministry adviser, wrote: “Seems like no chance that a single plane remained intact.”

“The impact of yesterday’s explosion is no less than the destruction of the cruiser Moskva,” he added, referring to the Russian cruiser that was the flagship of its Black Sea Fleet until it was destroyed by two Ukrainian Neptune missiles in April. “Dozens of warplanes will no longer be able to drop bombs and missiles on us.”

Ukraine has been methodically preparing for its southern counteroffensive in Kherson and Zaporizhzhia regions since May.

Ukraine has increasingly targeted critical infrastructure in and near Kherson, which Russia relies on to reinforce and resupply its army. Aiding the Ukrainians are western weapons, in particular, the U.S.-supplied HIMARS, or High Mobility Artillery Rocket Systems, which Kyiv’s forces have used to take out the important Antonivskyi bridge, forcing Russian troops to ferry supplies across the broad Dnipro river.

Ukraine has also trained fresh brigades and deployed them to the south where they have slowly recaptured dozens of small towns and villages.

Kherson and Zaporizhzhia regions were overrun and captured by Russian forces early in the invasion due in large part to internal security failures, local collaborators and weak defenses. The regions are economically significant and of strategic importance due to their location. Together with the southern Donetsk region, the three regions form a land bridge connecting Russia to occupied Crimea, and cut Ukraine off from vital access to the Sea of Azov and the Black Sea.

Ukraine’s focus on Kherson and Zaporizhzhia now stems largely from concern over the Kremlin’s plans to cement control over the regions and thus the land bridge connecting Russia to Crimea.

Russia has also distributed passports to Ukrainians in Kherson and introduced the ruble as the currency.

The two Ukrainian officials, plus a third close to Zelenskyy with knowledge of the counteroffensive, told POLITICO that they are certain Russia will use its hand-picked proxies and local collaborators to hold illegal referendums in occupied Ukrainian territories on or around September 11.

What is unclear, one of the officials said, is whether the referendums will be conducted in the “Crimean style” or the “Donbas style.”

The Russian-orchestrated vote in Crimea in April 2014 asked residents of the peninsula whether they wanted to join Russia, while the votes in the Moscow-controlled areas of eastern Donetsk and Luhansk regions in May that year sought to legitimize the “independence” of those areas and “people’s republics.” Both referendums were condemned by the international community and have largely not been recognized, except by Russia and various breakaway statelets.

Explaining the urgency for the military to counterattack now, the official close to Zelenskyy said they believed momentum is in Ukraine’s favor. Russian forces haven’t made much progress in the eastern Donbas region since the battles for Severodonetsk and Lysychansk, from which Ukraine made tactical retreats in June and July, respectively. And Russian morale is low, the official said.

Moreover, recapturing the south, the official said, would allow Ukraine to negotiate from a stronger position if or when talks between Kyiv and Moscow resume.

Also, the official added, Ukrainians trapped in Russian-occupied Kherson and Zaporizhzhia are waiting to see whether Kyiv will be able to “liberate” them or if they’ll remain stuck under the Kremlin’s control.

“The longer that our people are stuck under Russian occupation, the more we risk losing them,” the official said.