Game 6 in Boston needs a Miami Heat miracle — can anyone play that role? – The Mercury News - Patabook News
Patabook News
Skip to content 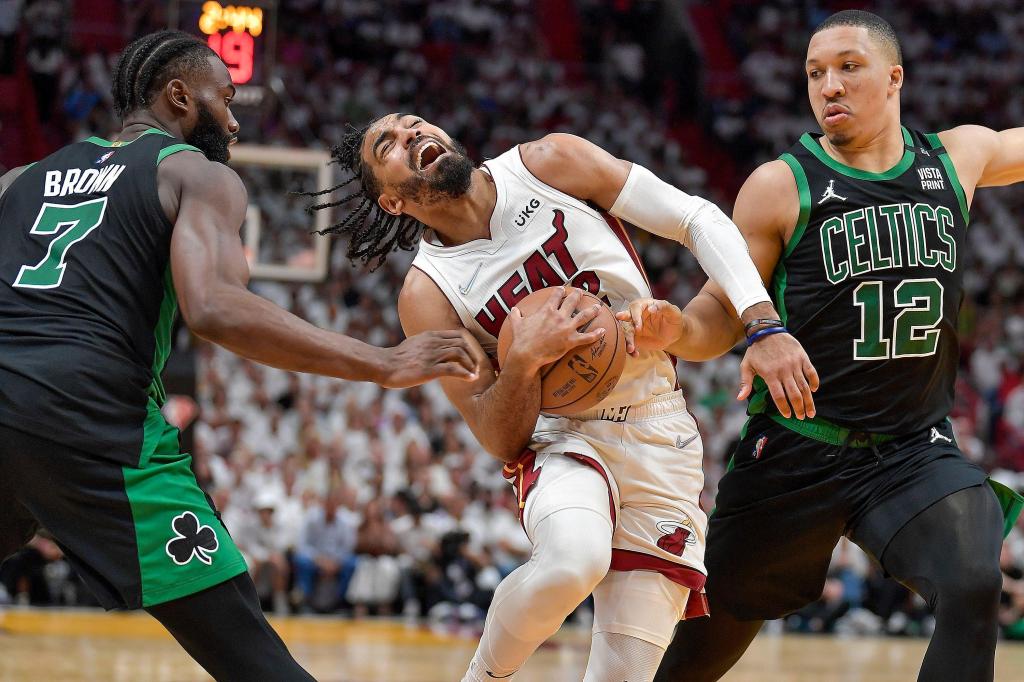 No, really, don’t ask how the Miami Heat can get Game 6 on Friday night to extend the Eastern Conference finals.

Denial isn’t a game plan. Hope isn’t a strategy. We just heard the Florida Panthers say on the way to their three-goals-in-four-games exit, “We’re getting our shots.”

Now Miami Heat coach Erik Spoelstra, who I’m in the tank for, utterly and unregrettably, was saying amid the rubble of the Heat’s Game 5 loss that sat atop the rubble of their Game 4 loss, “We got shots in our wheelhouse.”

There’s precedence to the Heat needing a Game 6 in Boston to keep the season going. It happened in 2012. The full sports nation doubted them and mocked them in a manner no one openly enjoys doing this time.

LeBron James had a game in 2012 like Larry Csonka in Super Bowl VIII, like Josh Beckett in Yankee Stadium – a forever moment of 45 points and 15 points to storm the gates and lead the Big Three to the next stop of an NBA title.

Jimmy Butler has shot 7 of 32 since Peyton Pritchard grabbed his knee and wrenched it in Game 3. That makes Pritchard is the MVP of this Eastern Conference finals.

Kyle Lowry, whose hamstring either is hamstrung or it’s going to be a long next two contracted seasons, had no points, no assists and one thankful rebound to get on the stat sheet in the Heat’s unfortunate Game 5.

Bam Adebayo has met his Celtic-green Kryptonite in Robert Williams. When Williams was out in Game 3, Adebayo had 31 points. Adebayo averaged a shoulder-shrugging 10.7 points the other four games.

That’s the Heat’s Big Three right now. They look like the bandaged fife-and-drum brigade going back to New England.

Please don’t misread: This is a tough team, a Heat-worthy team, one that’s extended won two playoff series and extended these conference finals nearly to the best-of-seven limit. So there won’t be snarky criticism or carping about their disappearing offense in a season that’s delivered the goods and a market where any team would be celebrated reaching this point.

But winning Game 6 would be beyond-LeBron-like for this team, wouldn’t it?

Spoelstra was talking about the Heat’s good shots after Game 5 and how if, yeah, “You remove the emotion,” and look at the cold, hard numbers like he did on the stat sheet before him …

The Heat 7 for 45. Which number is worse? The seven makes or the 45 attempts?

“We all felt it,’ Spoelstra said. “We all saw it. They’re a great defense. It’s not like we’re going to score 130. What I’m looking at is are we getting shots in our wheelhouse, shots in our strength zone. I know how ignitable our guys are. That can turn in a hurry, particularly on the road.

Look, as I said, Spoelstra can coach my team any time in any sport. He’s doing what a great coach must in times like this. He’s pushing the positive.

“Those open 3′s are the shots we’ve made all year long,’ Spoelstra said. “Our guys are ignitable. You see two or three of these guy, our guys see 10 of those go.”

He’s also pushing away the questions of health. “No excuses,’’ Spoelstra kept saying to question of Butler’s knee that limited him.

Philadelphia center Joel Embiid had a relevant tweet late Wednesday night: “Miami needs another Star.” Him? His career could use the Heat’s culture. He’s right, too, that the Heat could use a healthy Butler or Lowry right now.

Spoelstra has been here before, of course. This is kids’ stuff compared the pressure of 2012. Maybe Grandpa Haslem can tell the locker room what it was like that season with everyone against them. This year’s Heat team doesn’t draw emotion, by comparison.

“You’ve got to enjoy this,’ Spoelstra said. “You do. Every time you want to break through, and punch your ticket to the finals, you’re going to have to do some ridiculously tough stuff. Getting on to Boston, figuring that out collectively.

Those are the emotions and breakthroughs you have for the rest of your life. And bring this thing back on the 29th. That’s all we talked about.”

This would be a breakthrough unlike any other. LeBron had a historic game by South Florida standards. But is anyone on the Heat good enough or healthy enough to play that role in Boston this time?