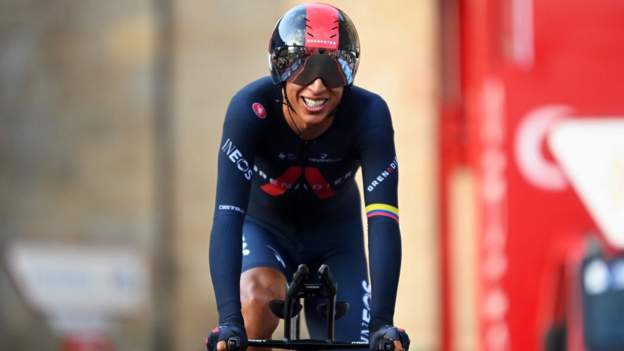 Two-time Grand Tour winner Egan Bernal says he is “super happy” to return to racing after a near-fatal crash.

His comeback on Tuesday with Ineos Grenadiers at the Tour of Denmark saw him two minutes behind stage one winner Olav Kooij.

“I’m super happy to be racing again. I’m hoping to go all the way and help the team here,” said Bernal.

“I’m just getting back into the rhythm. I am regaining my confidence.”

Bernal suffered back, leg, knee and chest injuries in the crash and had a second spinal surgery in February.

He got back on his bike just two months after the crash.

“I almost died but I thank God for this test.

“After what happened to me in January this has been the moment I’ve been waiting for – to race with my team-mates again.”

According to Ineos Grenadiers sports director Gabriel Rasch, Bernal has had a positive attitude throughout.

“There’s been no complaining from Egan, no negativity at all,” he said.

Bernal will compete again on Wednesday in the event’s second stage.