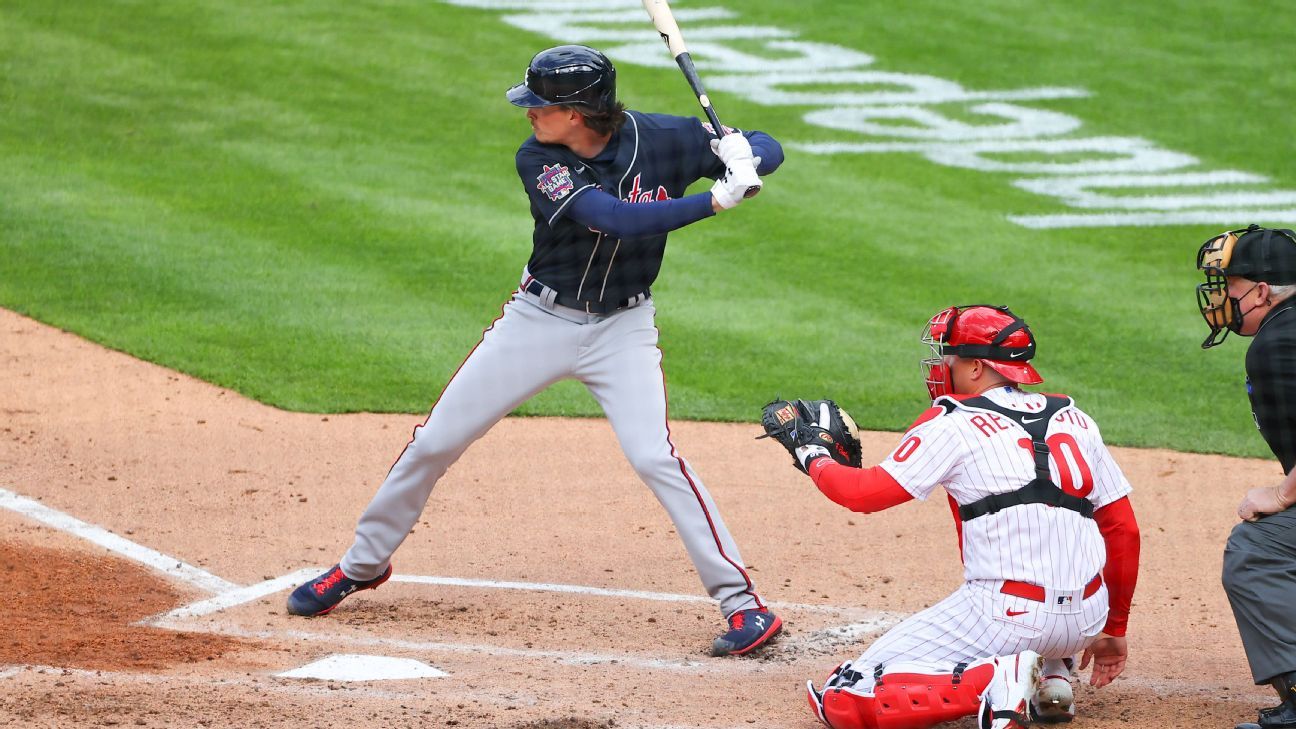 Baseball’s labor negotiations forge on, but the past week has effectively confirmed a major development pertaining to fantasy. It’s clear from Commissioner Rob Manfred’s Feb. 10 statements that the universal designated hitter is looking very likely to return for 2022 and, if so, it will presumably be here to stay.

The 2022 fantasy baseball game is live! Get the gang back together, or start a brand new tradition.
Join or start a league for free >>

While the raw numbers show no potentially seismic shifts as a result of the universal DH’s return — remember that the rule was present for the pandemic-shortened 2020 campaign, before reverting back to pitchers being in the lineup for National League games in 2021 — its reintroduction will have a noticeable impact on our game, in no small part because it’s going to most affect a specific subset of players.

So, about those National League pitchers

It’s the impact of the universal DH on NL pitchers that might most take fantasy managers by surprise. As you can see, that 0.12 runs-per-game difference between the 2020 and 2021 stats shows that there was an adverse impact upon pitching numbers as a direct result of the DH’s presence.

It wasn’t a one-year aberration, either. In each of 2017-19 as well as in 2021, seasons played in their entirety and with pitchers batting in games under NL rules, those games that were played under DH rules saw at least 0.06 more runs per game scored than those without. In the four years combined, we saw a 0.14 runs-per-game difference (4.68 in games with a DH, 4.54 in games without).

Considering that the NL is the league in which 86.4% of their scheduled contests were previously played without a DH, it’s the one that will be hit hardest. ESPN’s projections for 2022 apply roughly that margin of increase to NL pitchers’ ERAs, an “ERA penalty,” if you will.

Granted, a 0.14 run change amounts to (effectively) only three earned runs over 200 innings pitched, but understand that the runs come along with the means to score them (hits, walks, extra-base hits, often home runs), which can prove enough to move a pitcher down a handful of spots in the rankings. Considering that it’s happening primarily to a specific subset of arms — hurlers with a lengthy history of NL play — it can make a difference, especially when you’re dealing with close-call decisions at the draft table.

For example, Sandy Alcantara had 421 fantasy points in 2021 while Lucas Giolito had 410, but I can’t envision a scenario under which I’d prefer Alcantara to Giolito in a 2022 points league with the DH returning to the NL — although admittedly they possess different skill sets, which absolutely matters in the decision as well.

One other area I’d watch — and I readily admit this is my own speculation rather than it being data-driven — is pitchers with wider competitive splits, and/or who play in ballparks that tilt their fantasy appeal into the “matchups seeking” column. Coors Field pitchers like German Marquez, for example, are subject to wider run-scoring variations in their games at extreme hitters’ parks, meaning the penalty in those games specifically swells to greater than merely 0.14. Pitchers like Marquez, Aaron Nola, Tyler Mahle and Adrian Houser, who have some degree of either wide ERA-FIP divides, an ERA correction due, extreme hitters home ballparks or matchups susceptibility (or some combination of these) are ones I’d approach with slightly more caution.

Which hitters benefit most?

As with the pitchers, hitters from NL teams benefit most from the reintroduction of the DH, but don’t exaggerate the extent to which they do. An additional 300 plate appearances per team still amounts to only half of a lineup spot over a full 162-game schedule. However, as noted above, remember that some more of the team’s PAs will be pulled away from pinch-hitting appearances and applied to the DH (and some of those players affected will be one and the same).

Teams like the Atlanta Braves, New York Mets, Philadelphia Phillies and San Diego Padres have older hitters and/or defensive liabilities who make natural fits in the DH role. Additional teams like the Los Angeles Dodgers, Milwaukee Brewers and San Francisco Giants, which are notoriously matchups-oriented even on the hitting side, will almost assuredly shuffle their DH assignments on a nightly basis, spreading the 300-PA gain across a wide portion of the roster.

Additionally, it’s important to remember that there remains a large number of prominent free agents on the market, many of whom profile well as DHs. This is a group that includes the aforementioned Cruz and Schwarber, Nick Castellanos, Jorge Soler and Andrew McCutchen, just to name a few. Adding 15 new lineup positions to the league only helps expand the opportunities for such players, making it much less scary to see such free agents still in search of a job (although that’s more of a future-years factor than it is one for 2022, where the reason for it is obvious).

Let’s take a look at some of the specific players whose fantasy stock should get the biggest boost from this rule change.

1. Gavin Lux, Los Angeles Dodgers: Not that he’s the most likely DH on the roster (though the lack of a current position might force him into the spot most often), but Lux is a talented player who batted .360/.467/.500 in 17 games as a near-everyday player in the regular season’s final four weeks. Justin Turner might now be this team’s most logical DH, so perhaps the Dodgers will dabble with Lux at third base during spring training.

2. J.T. Realmuto, Philadelphia Phillies: A team sure to use a rotational approach to their DH, with defensively challenged Alec Bohm and Rhys Hoskins also candidates for starts, the Phillies could do wonders for Realmuto’s fantasy (and on-field) potential by adopting Kansas City’s “Perez blueprint.” There might not be a more important DH decision in the NL entering 2022 than the Phillies to do their darnedest to give Realmuto 25% of the DH starts to keep their lineup strong when he’s not catching, not to mention grant him extra rest. For fantasy, that kind of arrangement would help strengthen his counting-numbers potential and extend his prospects for more runs at the position’s No. 1 valuation spot.

3. Nick Senzel, Cincinnati Reds: Among the bounce-back, younger players who might benefit, Senzel stands out. Jesse Winker is a natural fit for the DH spot, freeing up an outfield role, and the Reds also have the infield flexibility to throw Senzel in there, should they want Mike Moustakas at DH on any given day. Senzel’s recent returns offer little in the way of fantasy promise, but he’s still only 26 years old, with a balanced mix of hit tool, pop and speed. The Reds no longer have an excuse not to test him as a regular.

Here a quick look at my predictions on which hitter stands to benefit most in terms of playing time as a result of the universal DH from the other 12 NL teams:

With 15 new DH jobs coming permanently to Major League Baseball, the immediate thought from fantasy managers might be a looming rise in the number of DH-only players.

To ease those concerns, bear in mind that teams have been increasingly treating the DH as the aforementioned “half-day off” role, meaning that players who slot there still often see enough time at a field position to carry eligibility there into the subsequent season. We saw that this past season with Yordan Alvarez, Miguel Cabrera, J.D. Martinez, Soler and Giancarlo Stanton, all of whom picked up a field-position eligibility for 2022. Granted, an aging player like Stanton, with his injury history, might be more apt to be locked into being the DH, but the Yankees roster somewhat handcuffs them in that regard.

If you’re particularly concerned about the impact on 2023 fantasy baseball, now’s as good a time as any to make the pitch to your league for a vote on next year’s roster structure. Some leagues, such as Tout Wars, have already made moves toward converting their fifth outfielder spots to a utility (or swingman — either a utility hitter or pitcher — in Tout Wars’ case). It’s also worth considering the concept of converting your second catcher spot to utility, considering the difficulty in filling the catcher spot these days.

NBA to retire Russell’s No. 6 for all 30 teams
Scottie Scheffler? Cam Smith? A look at PGA Tour award contenders
‘The only person that beat me was myself’: Will Teofimo Lopez learn from his mistakes?
Field of Dreams game: Best moments, scenes and more
Venables lauds OU response to Riley, Gundy exits