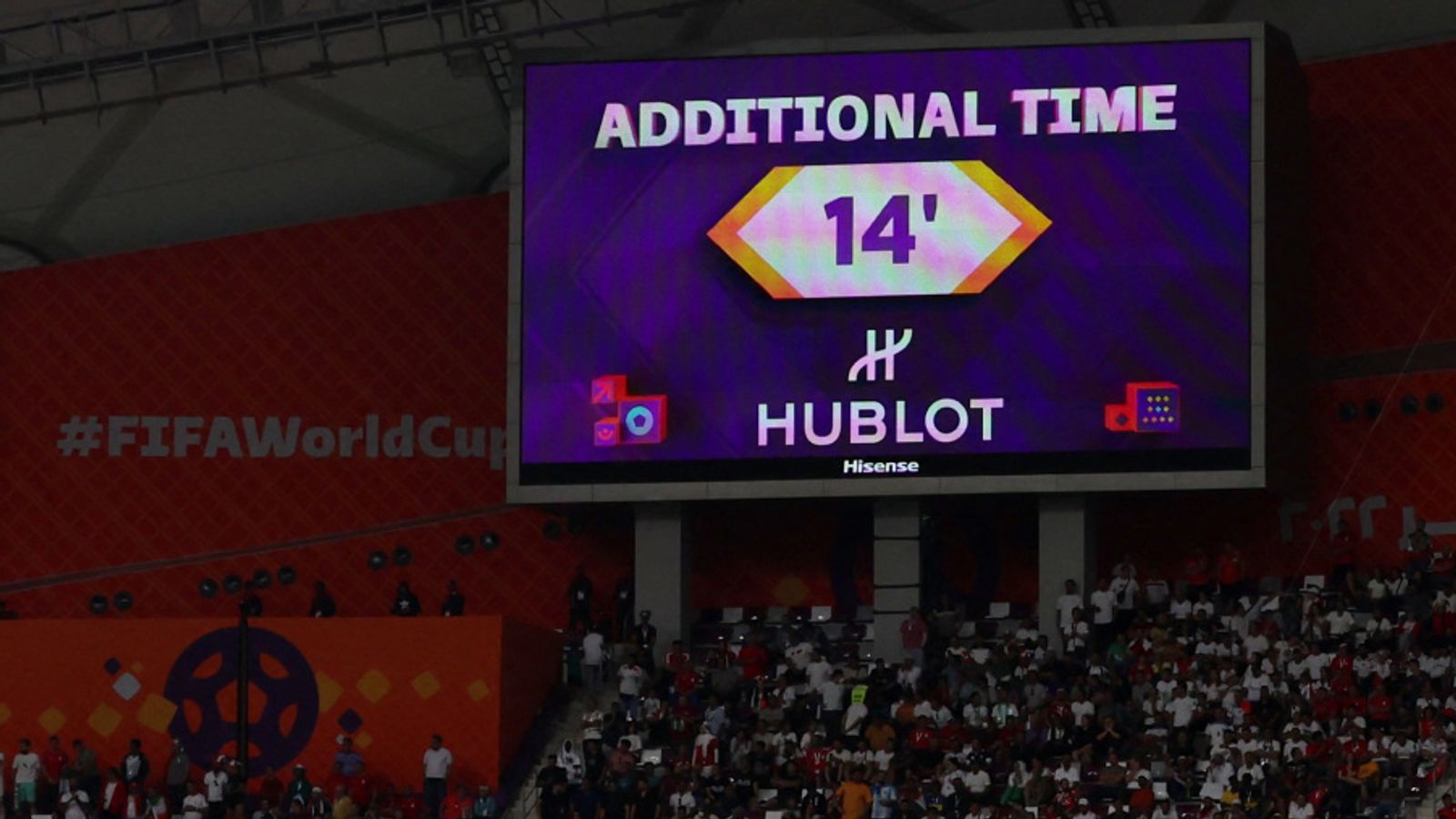 Many football fans will not have seen a game with as much stoppage time as in England’s 6-2 win over Iran.

Nearly half an hour was added by the officials.

Wales and the Netherlands had 10 extra minutes added on at the end of their respective matches, while Saudi Arabia – much to the annoyance of their bench – had to hang on into the 104th minute to beat Argentina.

England’s victory over Iran in Qatar was played for more than 117 minutes, making it the longest group-stage game at any World Cup, according to Opta.

Stoppages are being added for time-wasting by players, treatment for injuries, lengthy goal celebrations, substitutions, VAR interventions and yellow or red cards – making games continue far beyond what was previously expected.

A new FIFA directive says “unnatural lost time” should be added at the end of each half.

Speaking to ESPN before the tournament, Pierluigi Collina, chairman of the FIFA referees committee and a former World Cup official, said: “What we already did in Russia [2018] was to more accurately calculate the time to be compensated.

“We told everybody don’t be surprised if they see the fourth official raising the electronic board with a big number on it, six, seven or eight minutes.

“If you want more active time, we need to be ready to see this kind of additional time given.

He added: “What we want to do is accurately calculate the added time at the end of each half.

“It can be the fourth official to do that, we were successful in Russia and we expect the same in Qatar.

“I am not talking about VAR intervention, this is something which is different and calculated by the Video Assistant Referee in a very precise way.

“It’s the fourth official who usually proposes the amount of added time and the referee tends to [ultimately] decide.”

Officials have historically applied new FIFA directives strongly at World Cup tournaments, such as swift punishment for dissent or for dangerous tackles.

Read more on Sky News:
Gary Lineker: ‘The BBC and I should have spoken out more’
World Cup’s greatest shocks

The desire to see the ball in play more has grown through an era when obvious time-wasting became more common.

But large amounts of time being added on is not entirely new – in the English Football League this season, some matches have ended with around 10 minutes being added to the second half.

Officials have pointed to the large number of substitutions in the second period, but goals being scored in stoppage time with all the celebrations that follow can also extend the added time even further.

Inside Montreal captain Nick Suzuki’s crash course in French
Audi hints at luxury electric 4×4 to compete with Mercedes Benz and Land Rover
Backstage With… Joe Cornish on his first TV project since The Adam And Joe Show
Girl, 15, dies and boy, 16, in hospital after stabbing – as teen arrested for murder
Starmer attacks ‘hopelessly weak’ Sunak for failing to sack Zahawi