Liz Truss is set to face a wretched week at the Tory Party conference after the disastrous reaction to Kwasi Kwarteng’s tax-cutting mini-budget.

The prime minister arrived in Birmingham on Saturday looking buoyant just hours before yet another injurious poll was released.

Hopes to be greeted by an adoring host of members have likely been dashed as some Tory MPs have questioned whether she will still be PM by the end of the year.

Nearly two dozen senior Conservative MPs have told Sky News they will not be attending after a tumultuous week that saw the pound hit a record low against the dollar and the Bank of England stepping in to prevent a pension funds collapse.

Ms Truss and her chancellor have doubled down in defending the £45bn of unfunded tax cuts that caused the economic turmoil, insisting it is necessary for growth.

The PM on Saturday said “rough decisions” were needed to boost growth and told the Sunday Telegraph she wants to “bring people with me on this journey”, insisting the “status quo isn’t an option”.

There are concerns the situation could get worse if the Bank of England is forced to hike interest rates to shore up the currency and keep inflation down.

A series of polls taken this week have shown a massive drop in popularity for the Tories and a record high for Labour following the mini-budget.

The latest poll from Opinium showed 55% of voters disapprove of both Ms Truss and Mr Kwarteng while Labour enjoyed a 19-point boost.

And 75% of all voters think they have lost control of the economy. When it comes to Tory voters, 71% think they do not have the economy under control versus just 24% who believe they do.

Many of Ms Truss’ own MPs have been talking out against her economic plan and Tory grandee Michael Gove, who backed Rishi Sunak, is expected to demand the party changes course during eight official appearances at the conference. 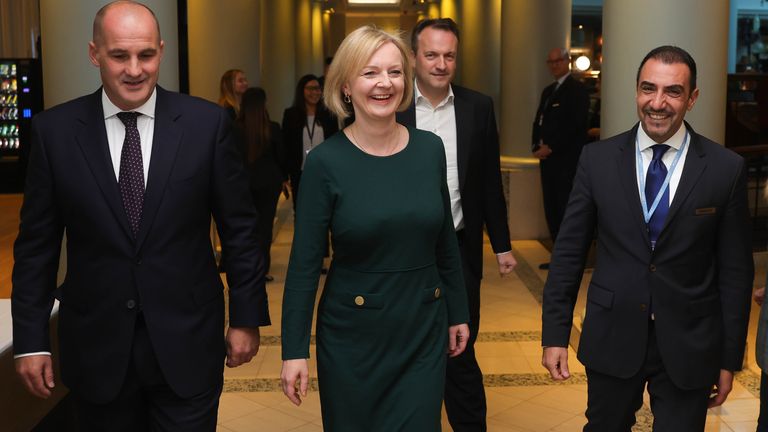 
Senior backbenchers told The Independent the PM has a matter of days to row back on tax and welfare cuts or a rebellion could see her removed from Downing Street by Christmas.

There are reports of letters going in to the chair of the backbench 1922 Committee from MPs calling for a vote of no confidence.

Under current rules she is safe from a leadership challenge for a year after her election but the 1922 executive could change the rules if demand from Tory MPs is overwhelming.

News on Saturday that Mr Kwarteng held a champagne reception with hedge fund managers just hours after the mini-budget was met with incredulity.

A source close to the chancellor denied he had provided guests with privileged information and said: “The government’s ambitions on lowering the tax burden are hardly a state secret.”

Truss needs to reset if she is to survive

Liz Truss starts her first Conservative Party conference less than a month – 25 days – since becoming leader, all the more notable given 11 of those days were spent in official mourning for the death of the Queen.

Also notable in that time is that the government spent upwards of £160 billion, Sterling collapsed to the lowest level since 1985, UK is now at threat of downgrade by credit rating agencies, swathes of cheaper mortgages have disappeared from the market, the Bank of England has done an emergency intervention to save pension funds and the Tories have recorded their worst opinion poll rating for YouGov since the company was founded in the late 90s.

Everybody – Tory MPs, institutions, voters looking at the economic turmoil to come – is anxious.

Ms Truss’s most important job is to show the county and her party whose side she is on.

Which is why the story tonight from the Sunday Times about her Chancellor Kwasi Kwarteng is so damaging.

On the day of the mini-budget, where he cut taxes for the richest, he went to a hedge fund party hosted by Andrew Law, Tory donor. 30 donors and financiers were there as he went round the top.

I’ve spoken to someone who has been at events such as these recently. They are amazed at just how casual Kwarteng is about spraying bold, potentially market moving views around such events, on topics such as the governor of the Bank of England Andrew Bailey.

Some in the City worry such talk undermines the credibility of the UK’s independent financial institutions, after the watchdog OBR and Treasury expertise already came in the firing line. Careless talk costs credibility.

Another difficult moment, one of just many.

Many Tories think Liz Truss now needs to reset with her party this week to survive.

‘The worst is yet to come’

Opposition parties used the opening of the Conservative conference to hit out at the Tories, with the SNP saying the worst is yet to come.

The SNP’s Westminster leader Ian Blackford said: “It’s been a disastrous first few weeks of her premiership but if the rhetoric from the Tories is to be believed, the worst of this Truss government is yet to come.”

His comments came after a key ally of Ms Truss’, Levelling Up Secretary Simon Clarke, signalled ministers are looking to shrink the overall size of the state alongside falling tax cuts.

And Sir Keir Starmer said it was “unacceptable” voters nor MPs had had any say on the new economic measures announced.

“The economy is not a laboratory experiment for the maddest scientists of the Conservative Party,” the Labour leader wrote in the Sunday Telegraph.

“The pain about to be inflicted on the whole country is the result of a prime minister and a chancellor wedded to a disastrous ideology.”

The conference will open today with a tribute to the Queen but it is Mr Kwarteng’s speech on Monday and Ms Truss’ closing speech on Wednesday that will command the political attention.