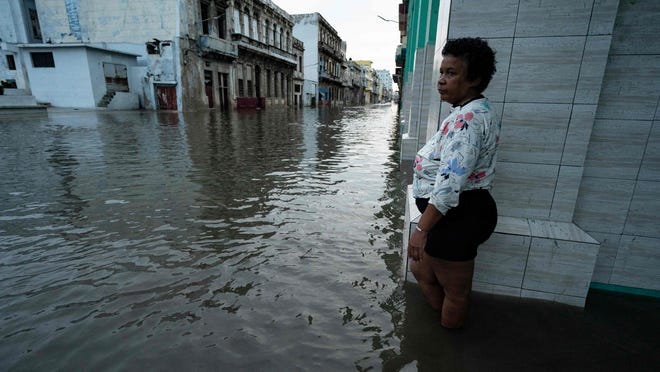 Editor’s note: Is your power out? Click here for a lite version of this page with a quicker load time.

Floridians woke up Thursday to flooded homes and uprooted trees as Hurricane Ian doused the Sunshine State with heavy rain and strong winds after slamming into it as one of the strongest storms in U.S. history.

More than 2.5 million homes and businesses across Florida were without power early Thursday, according to PowerOutage.us.

The storm, which is on track to weaken to a tropical storm, was forecast to continue lashing the state for most of Thursday before heading out into the Atlantic Ocean. Meteorologists with the National Hurricane Center say it will then turn northwest toward Georgia and South Carolina.

The storm made landfall as a Category 4 storm Wednesday afternoon, flooding parking garages and leaving residents stranded in their homes with battering 150 mph maximum sustained winds — just 7 mph shy of a Category 5 hurricane, the strongest on the Saffir-Simpson Hurricane scale. The storm rapidly weakened as it moved through Florida and was a Category 1 late Wednesday as nearly every home and business in three Florida counties was left without power.

The storm previously tore into Cuba, killing two people and bringing down the country’s electrical grid. No injuries or deaths have been reported in Florida.

►The U.S. Coast Guard was still searching for more than 20 Cuban migrants after their boat sank in stormy weather near the Florida Keys.

► Ian’s strength at landfall tied it for the fifth-strongest hurricane when measured by wind speed to strike the U.S. It’s tied with five other hurricanes that reached 150 mph — two in Florida, two in Louisiana, and one in Texas.

► Residents described the terror after a tornado tore through a condominium complex near Delray Beach, ripping off roofs and turning over vehicles. “I felt things blow past my head and face,” resident Jim Travis said. “When I opened the door, my apartment was destroyed.” Read more.

GET TEXT UPDATES: Sign up here for text updates on Hurricane Ian.

HURRICANE IAN TRACKER: Where is Ian headed? See the map.

As Hurricane Ian continues to move across Florida on Thursday, USA TODAY’s Hurricane Ian tracker will remain updated and offer the latest look at where the storm is headed.

Water coursed through the streets of Naples, creating giant waves that made roads impassable and flooded the city’s fire department. A video posted by Naples Fire-Rescue showed crews working to salvage equipment and firetrucks in more than 3 feet of water. In Cape Coral, about 30 miles up the coast, photos showed a sailboat washed up in the middle of a road near homes.

Nearby Fort Myers saw intense storm surge flooding coastal communities and the area around WINK News, a local CBS affiliate. Videos showed water reaching car windshields in the studio’s parking lot and some of the storm surge leaking into the building.

Further north along the coast, intense storm surge flooded a hospital’s lower level emergency room in Port Charlotte, while fierce winds ripped away part of the roof from its intensive care unit, according to a doctor who works there.

Water gushed down from above onto the ICU, forcing staff to evacuate the hospital’s sickest patients — some of whom were on ventilators — to other floors, said Dr. Birgit Bodine of HCA Florida Fawcett Hospital. Staff members used towels and plastic bins to try to mop up the sodden mess.

Officials warned flash floods were possible across the state, which could lead to pollution and radioactive waste overflow.

How does Hurricane Ian compare?:Category 5 hurricanes are rare. Is Ian’s punch the worst U.S. has seen?