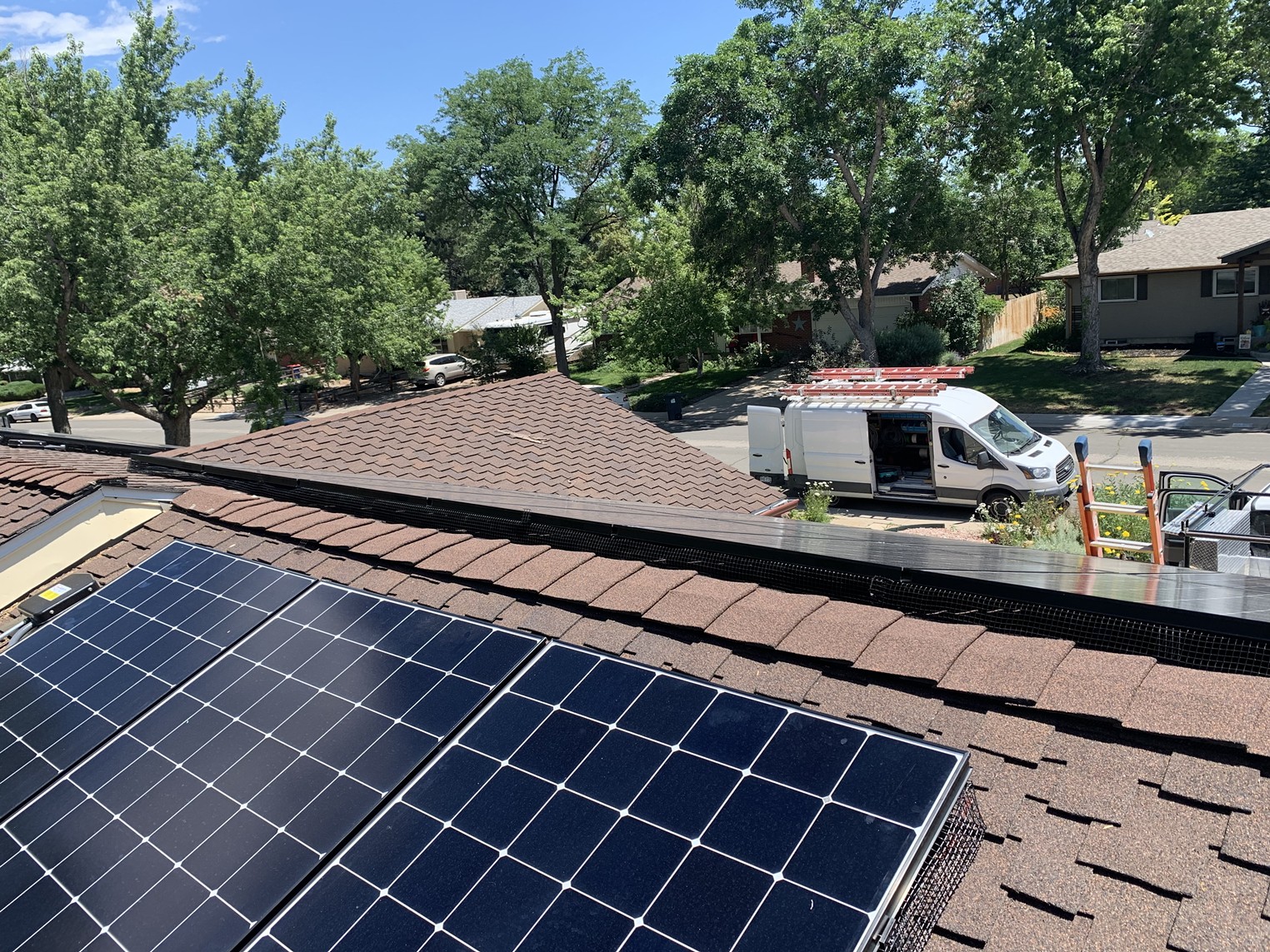 US
Share on Facebook
Share on Twitter
Share on Pinterest
Share on LinkedIn
Rachel Beck Lehnert and her husband, Elias Lehnert, run Colorado Cherry Company – Pie and Provisions on Tennyson Street and recently bought a home in the Applewood neighborhood near Lakewood. They value clean energy, so when they found out they could install solar panels on the house, they jumped at the chance.

“The longest part was finding the company that fit our needs,” Rachel says. “Once we found one that was the right fit, it went very quickly after that. From the point that they started our initial conversation to the actual installation, I want to say it was a matter of two months, which is pretty, pretty quick.”

They worked with Independent Power, a company that’s been in the renewable energy space for 25 years and was recently bought by Liz and Trevor Seelye, installing panels this summer that will provide enough power for their home now and in the future, when they plan to install a hot tub and transition to all-electric appliances to eliminate the use of gas.

In Larimer County, Charlotte Roe and her husband, Hector Bravo, had four panels added in August to their original solar system, installed in 2018 by Independent Power. Roe worked in foreign service for 21 years and is now semi-retired; she’s an avid wild horse and burro advocate.

Roe and Bravo own five acres of land, three horses (two of which were previously wild) and two previously wild burros. Because of their more remote location, four years ago they also installed a battery storage system to store extra power generated at their home through the solar panels.

They’re extremely conscious of their impact on the environment, growing their own produce and using a Tulikivi wood-burning stove made of soapstone to heat their home.

As a result, they hadn’t paid anything on their electric bill through Poudre Valley REA, save for a monthly maintenance fee of about $24, since 2018. But Roe’s sister and her partner are currently living in an Airstream on the land, and this past winter they received their first actual charges for electricity, prompting them to install more panels.

“Personal power use and industrial power contribute a huge part to carbon emissions,” Roe says. “It doesn’t take a genius or college-educated person — it doesn’t even take somebody who reads — to know that our planet Earth is headed toward catastrophe.”

Her desire to help the planet combined with the tax credit she got in 2018 when she installed her panels made solar a no-brainer for Roe. According to the Solar Energy Industries Association, through 2021 there was enough solar installed in the state to power over 440,000 homes.

One of 158 solar installers in the state as of 2021, Independent Power offers full home electrification. More than simply offering solar panels, the company can fit homes with battery storage, heat pumps and other mechanisms to decrease the carbon footprint of a household.

The process begins with an energy analysis, including electric bills from the past year, the size of the home, the angle of the roof and the direction the roof faces. The company adapted to the pandemic in 2020 and now does most of its energy analysis remotely, using drone and satellite imagery to create digital renderings.

“What I noticed, which was convenient and efficient, is that I could use my design tools to draw the outlines of their rooftop, figure out where the solar panels can go, add or subtract,” says longtime energy consultant Andrew Finanger. “I can delete it quicker than if I was at their house showing them the paper proposal.”

South is the best direction for solar panels to face because the sun hits them all day long there. East and west work, too. Finanger also calculates whether nearby buildings and trees could cast shadows, blocking out the panels.

Once he figures out where to place the panels to optimize electricity generation, Finanger conducts video calls with customers to coach them through the plan, saving more greenhouse gas emissions by cutting down on driving from client to client. Often the trickiest part of the process is that people don’t remember the password to their online electricity bill portal so they can access their usage history, he says. With most projects, those bills shrink to the monthly minimum fee after completion.

“That’s kind of the goal, to get all of your energy coming from the panels on your roof,” Finanger explains. “You’re able to save the most money from the utility and really have a good impact on your carbon footprint by getting your electricity from the sun rather than a coal plant.”

Independent Power helps people who can’t pay for the job at once to find loans. Rachel Lehnert says their loan payment is about the size of their old monthly Xcel bill, but less unpredictable and with a deadline: Once they pay off the loan, their energy will be free. Elias Lehnert and Rachel Beck Lehnert are thrilled with their solar panels.

Xcel also offers those with solar panels monetary incentives, buying back their power through its Solar*Rewards program. People like the Lehnerts, with solar panels without battery storage, operate under a net-metering policy. If they make more energy than they consume, that energy gets donated back to the grid, and the homeowner gets a credit.

“The grid is your battery storage, essentially,” Finanger explains. “You get to store your power on their grid and then use it when you want. It goes for an annual basis to where, if you make a lot of energy that you don’t use in the warmer seasons like spring and fall, then you can use that power…in winter.”

Those who are looking for more security might still want a battery, Finanger notes. If the grid goes out, those with battery storage will still have power in their homes. In cases of extreme weather or for people in more remote locations, that’s especially helpful.

The Inflation Reduction Act signed into law this August offers further incentive for those looking to make their homes more energy-efficient. According to Finanger, the average cost of installing solar panels is $20,000; with the act’s Energy Efficient Home Improvement Credit, people stand to get 30 percent of that amount back in a tax credit. The act also includes two programs — the HOMES rebate program and the High-Efficiency Electric Home Rebate Act — that give homeowners between $4,000 and $14,000 for making upgrades, particularly if they are low- to middle-income.

Those interested in installing battery storage are also eligible for Inflation Reduction Act funding. Finanger estimates that adding in battery storage costs an additional $15,000 to $20,000.

The Lehnerts say they’ll consider future energy-efficiency retrofits; they also plan to implement energy efficiency in their business by installing solar panels and an electric oven. In the meantime, Rachel says, they’re thrilled with how the current panels work.

“They look really beautiful,” she adds. “We haven’t had any issues thus far. People definitely are interested in it. Our families, friends, neighbors — people are really wanting to do it.”

And they should, Roe says, especially given the federal funding available. “Don’t be intimidated, don’t procrastinate,” she advises. “This is something everybody can do. Almost anybody who owns a home, or even has a small business that they run, could save on costs in the long run and make a big contribution to the planet.”