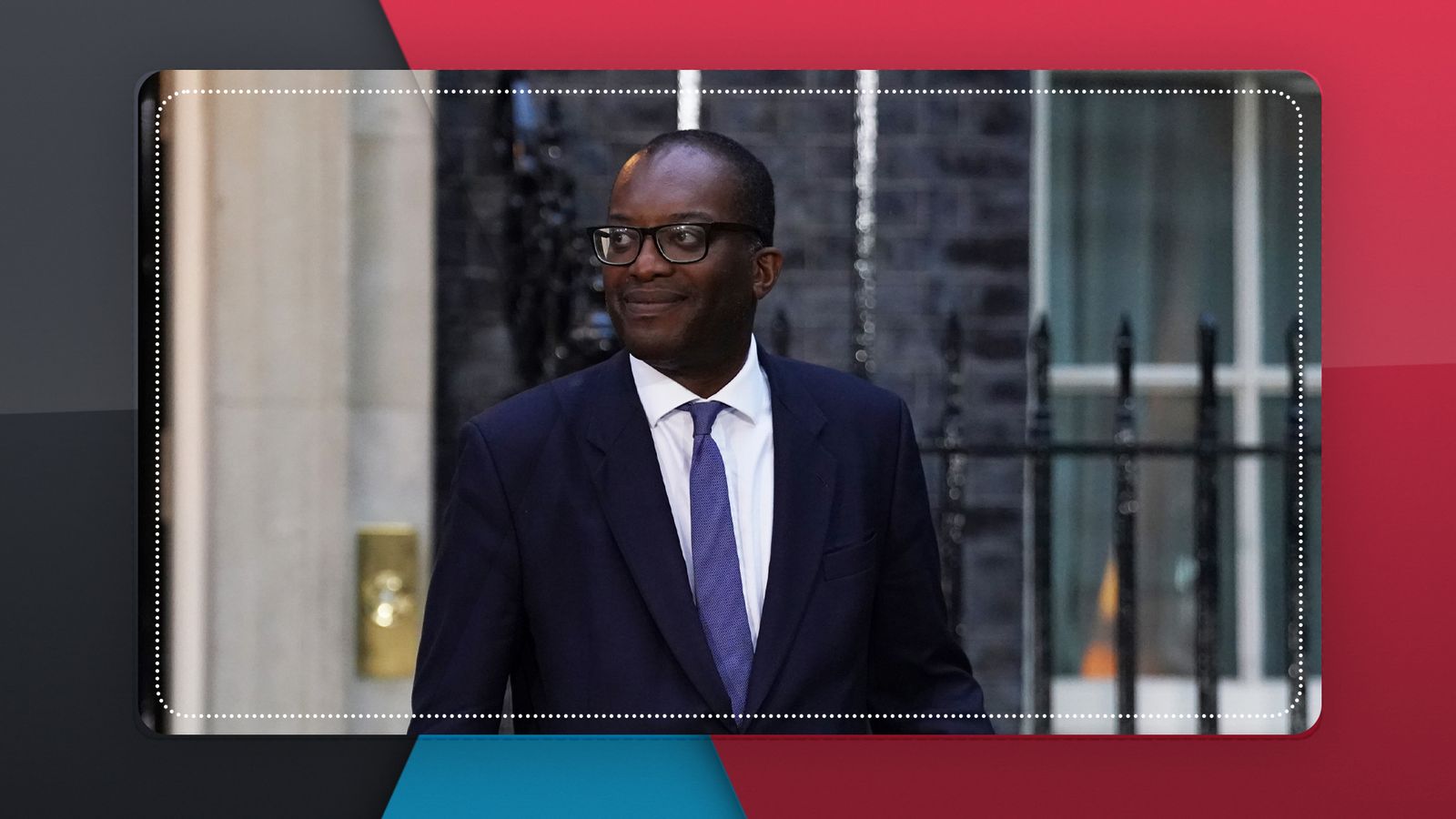 Income tax will be cut by one penny, Chancellor Kwasi Kwarteng has announced, as part of a raft of measures aimed at boosting economic growth.

The reduction in the basic rate from 20% to 19% will be introduced in April 2023 – one year earlier than planned.

At the same time, the 45% top rate of tax will be abolished with a single higher band of 40%.

The planned increase in corporation tax from 19% to 25% will also be axed, while stamp duty will be cut for homebuyers.

The mini-budget, called the “growth plan” by the government, comes as the UK faces a cost of living crisis, soaring inflation and climbing interest rates.

The chancellor had already confirmed the National Insurance hike introduced by Boris Johnson’s government to pay for social care and tackling the NHS backlog will be reversed on 6 November.

Economists have described the chancellor’s announcement as the “biggest tax-cutting event since 1972”.

It is understood the tax cuts will cost £45bn.

In his statement, the chancellor also announced:

The government argues the action being taken will help bolster economic growth and increase the tax to fund public services.

But critics argue the measures are a risk when public debt is already high and the cost of borrowing is rising.

Mr Kwarteng said economic growth is “not as high as it should be”, arguing this has “made it harder to pay for public services” and in turn led to higher taxes.

He said: “We need a new approach for a new era, focused on growth.

“Our aim, over the medium term, is to reach a trend rate of growth of 2.5%. And our plan is to expand the supply side of the economy through tax incentives and reform.”

He said this will deliver higher wages, greater opportunities and fund public services.

Mr Kwarteng added: “For too long in this country, we have indulged in a fight over redistribution. Now, we need to focus on growth, not just how we tax and spend.

“Today, we have cut stamp duty, we have allowed businesses to keep more of their own money to invest, to innovate, and to grow, we have cut income tax and national insurance for millions of workers, we are securing our place in a fiercely competitive global economy with lower rates of corporation tax and lower rates of personal tax.

“We promised to prioritise growth. We promised a new approach for a new era. We promised to release the enormous potential of this country. Our growth plan has delivered all those promises and more.”

Labour’s shadow chancellor Rachel Reeves argued the chancellor’s statement was an “admission of 12 years of economic failure” by the government.

“Lower growth, lower investment, lower productivity and today we learn that we have the lowest consumer confidence since records began.

“The only things that are going up are inflation, interest rates and banker bonuses.”

Ms Reeves added: “It is all based on an outdated ideology that says if we simply reward those who are already wealthy, the whole of society will benefit.

“They have decided to replace levelling up with trickle down.”

Lib Dem leader Sir Ed Davey said: “City bankers will be popping the champagne while struggling families worry about how they afford the weekly shop.

“It is not a plan, it’s a recipe for disaster.”

The chancellor has also faced criticism for refusing to publish an economic forecast by the independent Office for Budget Responsibility (OBR) alongside the mini-budget, sparking claims he is avoiding scrutiny.

The lack of OBR data means there will be no independent analysis of whether the announcements breach the government’s existing budget rules or their impact on growth.

Conservative chair of the Treasury Select Committee Mel Stride said it meant there was a “vast void” at the centre of the statement.

Responding, Mr Kwarteng said the OBR would produce a forecast “before the end of the calendar year”.

Paul Johnson, from the Institute for Fiscal Studies, called the chancellor’s statement “quite extraordinary”.

He said: “It was like having an entirely new government.

“This was the biggest tax-cutting event since 1972, it is not very mini. It is half a century since we have seen tax cuts announced on this scale.”