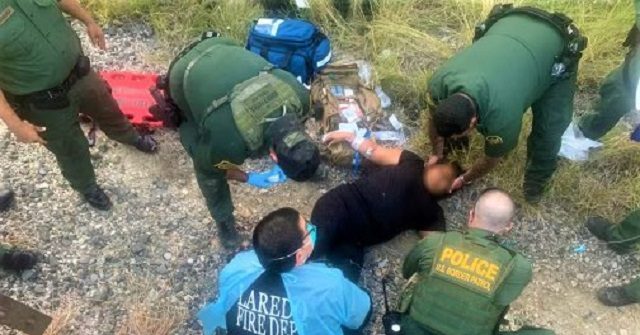 Del Rio Sector Border Patrol agents rescued a migrant woman who lost a foot while jumping from a train in South Texas.

Eagle Pass Station agents received a 911 call from a man saying a woman jumped from a moving railcar. The railcar ran over her leg, severing her foot just above the ankle, according to information obtained from Del Rio Sector Border Patrol officials.

An air ambulance helicopter arrived and flew her to a hospital for additional treatment.

The apprehensions included one group of nearly 300 migrants — mostly single adults. The large group crossings tied up federal resources causing migrants to sit in 100+ degree heat for hours while they awaited transportation.

Texas National Guard soldiers and Department of Public Safety troopers held migrants waiting for Border Patrol. In addition, DPS troopers transported some migrants back to a CBP port of entry they waited in shade for transportation.