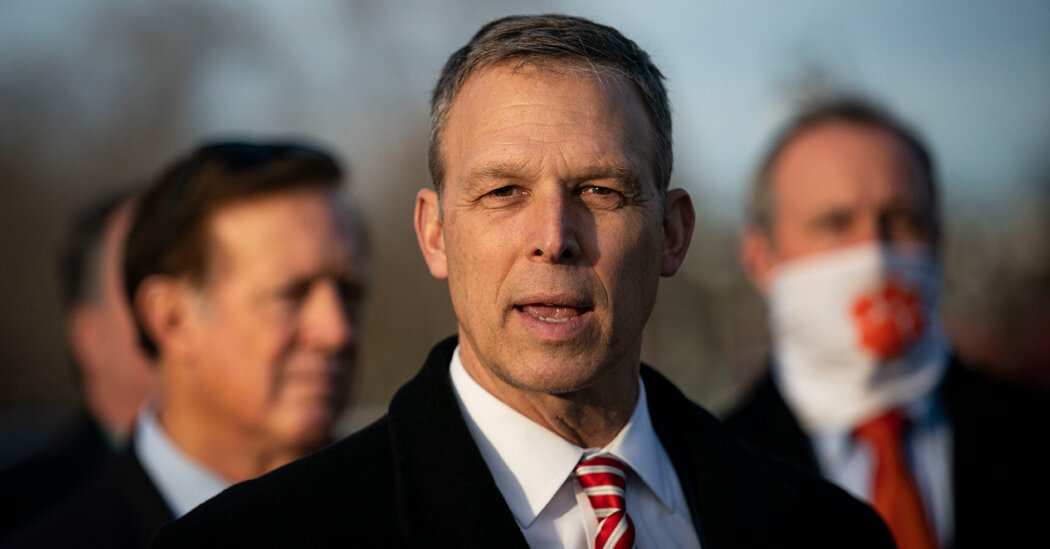 The F.B.I.’s seizure of Representative Scott Perry’s phone this week was at least the third major action in recent months taken in connection with an escalating federal investigation into efforts by several close allies of former President Donald J. Trump to overturn the 2020 election, according to two people familiar with the matter.

The inquiry, which was begun last year by the Justice Department’s inspector general’s office, has already ensnared Jeffrey Clark, a former department official whom Mr. Trump wanted to install atop the agency to help him press his baseless claims of election fraud, and John Eastman, an outside lawyer who advised Mr. Trump on brazen proposals to overturn the vote result.

In June, federal agents acting on search warrants from the inspector general’s office seized phones and other electronic devices from Mr. Clark and Mr. Eastman. That same tactic was used on Tuesday to seize the phone of Mr. Perry, a Republican of Pennsylvania.

While the inspector general’s office had initial jurisdiction in the probe because Mr. Clark was an employee of the department, there have been signs in recent days that the investigation is increasingly being run by prosecutors from the U.S. attorney’s office in Washington. One of those prosecutors, Thomas P. Windom, is in charge of a broad investigation of a plan by Mr. Trump and his allies to create fake slates of electors to the Electoral College in states that were actually won by Joseph R. Biden Jr.

It remains unclear exactly how — or even if — the inquiry into Mr. Perry, Mr. Clark and Mr. Eastman is entwined with the broader investigation. In that inquiry, prosecutors are seeking to determine whether a group of Mr. Trump’s lawyers and several of his allies in state legislatures and state Republican parties broke the law by creating pro-Trump slates of electors in states he did not win and later by using them to disrupt a joint session of Congress on Jan. 6, 2021, where the final results of the election were certified.

Mr. Clark, Mr. Eastman and Mr. Perry all played roles in the effort to keep Mr. Trump in office, according to extensive evidence gathered by the Senate Judiciary Committee and the House select committee that is looking into the events of Jan. 6. The men also each had direct dealings with Mr. Trump, meaning the inquiry could ultimately lead to the former president.

At a series of public hearings, the House committee showed, for instance, how Mr. Eastman, a constitutional scholar, was one of the chief architects of the fake elector plan, advising Mr. Trump on its viability and encouraging lawmakers in some key swing states to go along with it.

Mr. Eastman also took part in a campaign to pressure Vice President Mike Pence to use the fake slates of electors to disrupt or delay the normal counting of electoral votes on Jan. 6 in the effort to hand Mr. Trump the election.

The Senate Judiciary Committee and the House Jan. 6 panel have further documented how, in December 2020, Mr. Clark helped to draft a letter to Gov. Brian Kemp of Georgia falsely claiming that the Justice Department had evidence that the vote results in the state might have been marred by fraud. The letter, which was never sent, advised Mr. Kemp, a Republican, to rectify the problem by calling a special session of his state’s General Assembly to create “a separate slate of electors supporting Donald J. Trump.”

Mr. Perry was instrumental in pushing Mr. Trump to appoint Mr. Clark as his acting attorney general over the objections of several other top officials at the Justice Department. At one of its presentations, the House committee released text messages in which Mr. Perry repeatedly pressured Mark Meadows, then Mr. Trump’s chief of staff, to reach out to Mr. Clark.

The House committee issued a subpoena to Mr. Perry in May, but he declined to comply with it. Mr. Clark and Mr. Eastman were also subpoenaed by the committee and repeatedly invoked their Fifth Amendment rights against self-incrimination.

On Wednesday, after Mr. Perry received his phone back from investigators, prosecutors told him that he was a witness in, not a subject of, their inquiry, according to one of his lawyers, John Irving.

Mr. Perry has described how three F.B.I. agents seized his phone on Tuesday morning while he was traveling with family. He compared his situation to the F.B.I.’s search of Mr. Trump’s Mar-a-Lago property on Monday, in which agents took boxes of materials related to an investigation into the mishandling of classified White House documents.

But the origins of the investigation in which Mr. Perry has found himself involved are quite different from the case that led to the F.B.I. opening a safe at Mar-a-Lago.

In the weeks after the election, Mr. Perry was among at least 11 Republican members of Congress involved in discussions with White House officials about overturning the election. He played an especially active role in the attempt to replace Jeffrey Rosen, the acting attorney general at the time, with Mr. Clark.

The Justice Department’s inspector general’s office, which has jurisdiction over inquiries into department employees, learned of Mr. Clark’s actions through reporting in The New York Times. The office then started an internal investigation that has since escalated into a criminal inquiry, according to people familiar with the matter.

As the investigation has progressed, the Justice Department has gained the cooperation of Ken Klukowski, a Justice Department lawyer who worked under Mr. Clark and was in contact with Mr. Eastman, according to a statement his lawyer, Edward Greim, made to CNN. Mr. Klukowski helped Mr. Clark draft the letter to Mr. Kemp in Georgia.

Among the signs that the Justice Department had assumed more control of the inquiry was Mr. Windom’s submission last month of a notice of appearance in a federal case that Mr. Eastman filed in trying to get his phone back from investigators.

On Monday, Mr. Windom and a second federal prosecutor in Washington, Mary Lyle Dohrmann, took the lead in responding to Mr. Eastman, filing a rebuttal to his claims.