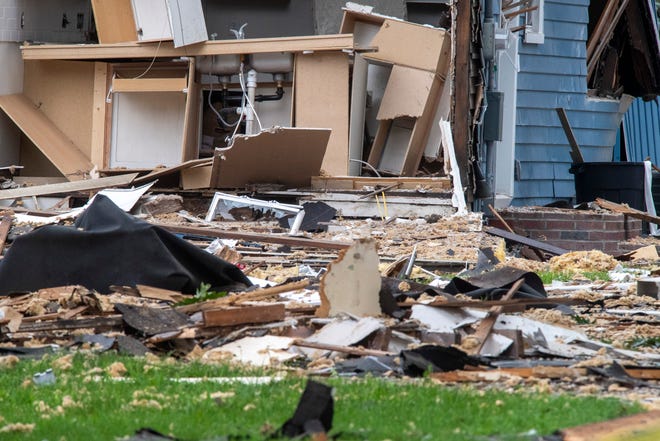 EVANSVILLE, Ind. — hree people have died after a house exploded in Evansville, Indiana, on Wednesday.

The residential street was littered with shrapnel and the incident damaged dozens of other buildings, authorities said.

Evansville Fire Department Chief Mike Connelly said the explosion had a 100-foot blast radius and damaged about 40 homes. There is no word yet on what caused it.

The explosion, which was reported just before 1 p.m. appears to have completely destroyed the home where it occurred, according to a photo Evansville Mayor Lloyd Winnecke posted to social media. Neighboring homes suffered heavy damage.

Police shut down nearby streets and a department spokeswoman said part of the residential street where the explosion occurred will be closed for longer.

“At this time, there are 3 deaths reported to us that are a result of the explosion on N. Weinbach Ave.,” the office said in an email statement.

Earlier Wednesday, Evansville Police Department spokeswoman Sgt. Anna Gray said two people were injured in the house that exploded. She said a third injury was in a neighboring house.

The fire department had not confirmed if all of those houses were unoccupied at the time of the blast because “some were too unstable to enter.”

Jasmine Vickers, who works at a child care center about four blocks away from the explosion, said the loud sound occurred during the kids’ nap time and amazingly only woke up one of them.

“But the building shook, and we looked outside and saw everyone running.”

She said she woke everyone up and evacuated the building immediately.

Leslie Lawrence, who works for a trophy store, said when the explosion happened, “Everybody jumped. We thought a tree had fallen on us, or a car crashed into the building.”

The Federal Bureau of Alcohol, Tobacco, Firearms and Explosives is now on scene investigating.

Police said all fires have been extinguished. A local electricity provider was reporting 162 power outages in the area of the explosion as of 2:53 p.m. The number had been as high as 1,000 earlier.

In a Twitter post, Winnecke said the local Red Cross chapter was on scene providing food and water, and would be assisting those “with sheltering needs” following the explosion.