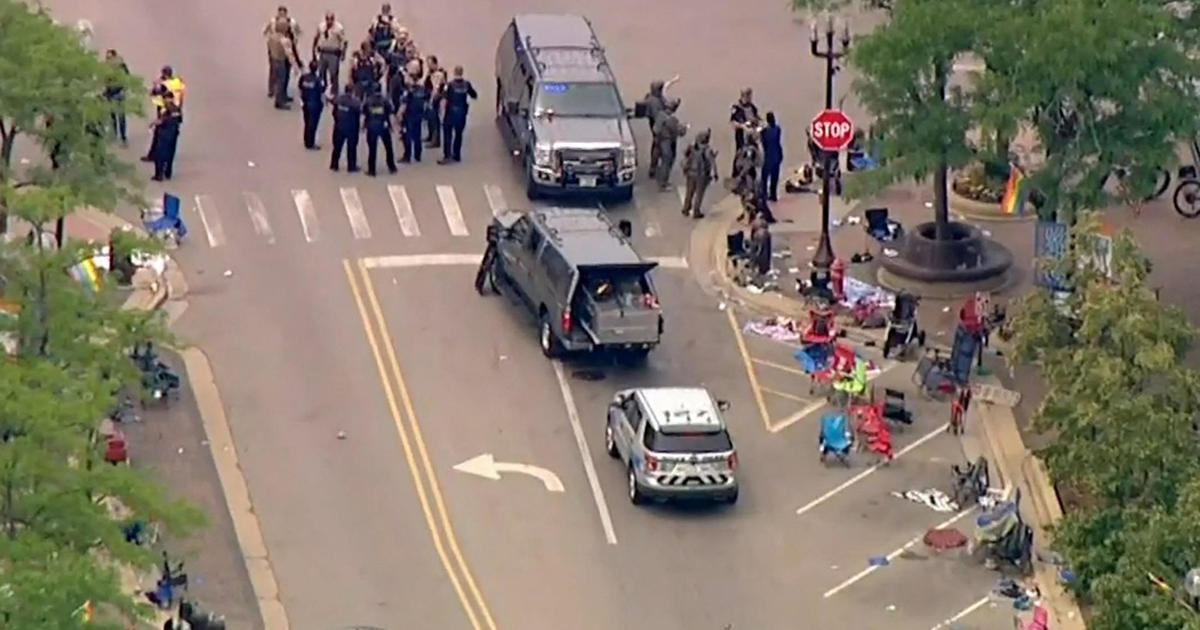 CHICAGO (CBS) — The suspect in the deadly Highland Park mass shooting, Robert “Bobby” Crimo III, confessed to opening fire from a rooftop during the July 4th parade, before fleeing to Wisconsin, where he considered shooting more people.

Crimo was ordered held without bail at his first court appearance on Wednesday, where prosecutors revealed he fired more than 80 rounds during the attack.

Lake County Major Crimes Task Force spokesman Chris Covelli later revealed Crimo drove to Wisconsin, after fleeing the scene of the mass shooting, and “seriously contemplated using the firearm he had in his vehicle to commit another shooting in Madison.”

Covelli said Crimo was armed with a second rifle and 60 rounds of ammunition while in Madison, after dropping the murder weapon from Highland Park in an alley as he fled the scene. But, because he hadn’t put any planning into a shooting in Madison, Crimo did not carry out an attack there.

Instead, he went back to Illinois, dumping his phone in Middleton, Wisconsin, on his way.

That new detail in the case came after Lake County Assistant State’s Attorney Ben Dillon told a judge at Crimo’s bond hearing that Crimo made a voluntary confession to the mass shooting in Highland Park.

Dillon argued Crimo must be held without bail because he faces a mandatory life sentence if he’s convicted.

A Lake County judge ruled Crimo presents a “specific and present threat” to the public, and ordered him held without bail.

Crimo is charged with with seven counts of first-degree murder, one for each of the seven people killed in what Lake County State’s Attorney Eric Rinehart has described as a “premeditated and calculated attack.” At least 38 people were wounded in the shooting.

Authorities have said Crimo planned the attack for weeks, and dressed in women’s clothing to disguise himself.

At Crimo’s bond hearing Wednesday morning, prosecutors said, after his arrest Monday night, Crimo confessed to the shootings. They said he also confessed to dressing in women’s clothing, and covering his facial tattoos in makeup, to avoid being recognized.

Authorities have not determined a specific motive for the attack, but Covelli said Crimo “had some type of affinity toward the number 4 and 7, and inverse with 7/4,” a suggestion the attack might have been specifically timed for July 4.

“It apparently comes from music that he’s interested in,” Covelli said.

At Crimo’s bond hearing, Lake County Assistant State’s Attorney Ben Dillon said surveillance video from the shooting showed Crimo using a fire escape ladder to access the roof of a building at the northwest corner of Central Avenue and 2nd Street in Highland Park, and then fleeing down an alley behind that building after the shootings, where he dropped the rifle he’d used in the shooting, and then wrapped in a cloth before fleeing the scene.

The ATF was able to trace the semiautomatic assault rifle’s serial number back to Crimo, who bought it at a local gun store in 2020, according to Dillon.

When he was questioned by police, Crimo provided a voluntary statement confessing to his actions, saying he looked down the sights of the rifle, aimed, and opened fire at people across the street from the rooftop during the Highland Park July 4th parade.

Investigators recovered those three magazines from the rooftop, along with 83 spent shell casings, according to Dillon.

Crimo showed no emotion during the hearing, and spoke only briefly when he said he did not have an attorney.

Prominent Chicago defense attorney Tom Durkin originally had been hired by Crimo’s family, but after having trouble logging in to the Zoom session for the bond hearing, Durkin said he learned he has a potential conflict of interest in the case, and Crimo will need a public defender.

Crimo is due back in court on July 28. Prosecutors have said he is expected to face additional charges in the future.

While Crimo is not facing any federal charges, U.S. Attorney John Lausch suggested Tuesday that federal charges might be a possibility down the line.

“These state murder charges are appropriate at this time. We will continue to deploy our federal resources in collaboration with these state and local partners to ensure that individuals who commit horrific acts of violence like this using firearms are held accountable,” he said.

Meantime, Crimo’s parents have retained their own attorney, Steve Greenberg, who issued the following statement on their behalf:

“We are all mothers and fathers, sisters and brothers, and this is a terrible tragedy for many families, the victims, the paradegoers, the community, and our own. Our hearts, thoughts, and prayers go out to everybody.”

Authorities have said Crimo planned the attack for weeks, dressed as a woman to hide his tattoos and blend in with the crowd, and drove up to Wisconsin before being arrested.

Christopher Covelli of the Lake County Major Crime Task Force has said Crimo came to the attention of police back in April of 2018 for a suicide attempt.

“This was a delayed report, so Highland Park still responded to the residents a week later spoke with Crimo spoke with Crimo’s parents and the matter was being handled by mental health professionals at that time. There was no law enforcement action to be taken,” Covelli said Tuesday.

Another incident took place in 2019, when a family member said Crimo was exhibiting concerning behavior.

“Crimo said he was going to kill everyone and Crimo had a collection of knives. The police responded to his residence. The police removed 16 knives, a dagger and a sword from Crimo’s home. At that time, there was no probable cause to arrest. There were no complaints that were assigned by any of the victims,” Covelli said.

He added that after that, the department notified the Illinois State Police of the incident. Covelli elaborated on why Crimo wasn’t taken into custody back in 2019.

“Police can’t make an arrest unless there is probable cause to make an arrest or somebody is willing to sign complaints regarding the absence of those things. The police don’t have power to detain somebody,” Covelli said. “Now, if there is an issue where there is the necessity to involuntarily commit somebody to the hospital, that’s an option. But that wasn’t an option at that time that it didn’t fall in that category.”

Covelli said they want to speak to a female witness seen on video.

“Based on video surveillance recovered by our investigators were very certain that there was a female witness who saw Crimo drop an object inside of a red blanket behind Ross (Central Cosmetics) at 625 Central Avenue immediately following the shooting. We’ve not been able to identify this witness yet but we’re asking if you are the witness and you are hearing this please call 800-Call-FBI. Investigators really would like to speak to you about this,” Covelli said.

Covelli has said so far, a motive hasn’t been provided. Crimo was arrested around 6:30 p.m. Monday, more than eight hours after the shooting, following a chase in the north suburbs.

In addition to the rifle recovered at the scene of the shooting, Covelli said Crimo was in possession of another rifle when he was arrested, and authorities retrieved several other firearms from his home in Highwood. All of those guns were purchased legally, according to Covelli.

He added that the department is in the process of putting together a timeline of the events and asked that anyone with any video they may have to come forward, because it could help in the investigation.

“One of the assets that we have is members of the community. If you have any video of this individual that is walking toward the parade at the parade, potentially on the roof to please call 1-800-Call-FBI (225-5324.)

Covelli said Crimo later went to his mother’s home after the mass shooting.

“He walked to his mother’s home who lived in the area and he blended right in with everybody else as they were running around almost as he was an innocent spectator as well,” Covelli added.

As far as the way Crimo was dressed, Covelli said it was to not only disguise himself, but to blend in a large gathering of people.

“He wore it as a way to conceal himself,” Covelli said, who noted that the shooting appears to be “completely random.”

“He was seen on camera in women’s clothes. Video cameras played a tremendous role in how we were able to identify him,” Covelli said.

When asked whether the shooting was inspired by hatred, Covelli said “we have no information to suggest at this point it was racially motivated, motivated by religion or any other protected status.”

Covelli told CBS 2 Investigator Megan Hickey that Crimo got his FOID card in 2020, which would have made him 18 or 19, as early as he could get it. He said there are no indications that a second person was involved.

He added that the department has viewed a number of videos put out by the suspect prior to the mass shooting and that they’ll be part of the investigation.

Covelli said the weapons were purchased locally, within the Chicagoland area.

Mayor Rotering said several vigils and prayer services are taking place throughout the community to help people grieve and process the magnitude of the event. They include:

“Anyone who is a victim of the incident and is in need of support can call 800 Call FBI,” Rotering said.

The mayor thanked people who came out to help her city.

“I know what a generous community we are a part of we are overwhelmed with the amount of support offered not only from those parents, but the surrounding region and throughout the nation. Thank you,” Rotering said.

She added that people should be alert to scams that claim help for victims of the Highland Park mass shooting. Rotering said coming soon, information will be on the city’s website as to where people can donate.

Covelli said despite the capture of a suspect, the investigation is far from over.

“We’re going to reach out to everybody we possibly can that has information firsthand information about him, whether that’s family members, teachers, friends, whoever it is that has information, but it does take time,” Covelli said, adding that it’ll include people who may have crossed paths with Crimo years ago.

“Who may know him, who knew him in the past. That is something that taskforce investigators are working on. They’ve interviewed a number of people thus far. But please keep in mind, we’re 24 hours in and there’s a lot of work to be done here. We’re not done.”

Beginning on Wednesday, the FBI’s victims service response team will work with local, state, and federal aid groups to staff a family assistance center, where victims and their families will be able to get counseling, financial aid, and other assistance to help them recover from the shooting. It will be located at Highland Park High School, and will be open from noon until 9 p.m. Wednesday, and from 9 a.m. to 9 p.m. on Thursday and Friday.

The CBS Chicago team is a group of experienced journalists who bring you the content on CBSChicago.com.