CBS News Poll: Texans think their state is better than most, but some think it's change for the worse - Patabook News
Patabook News
Skip to content 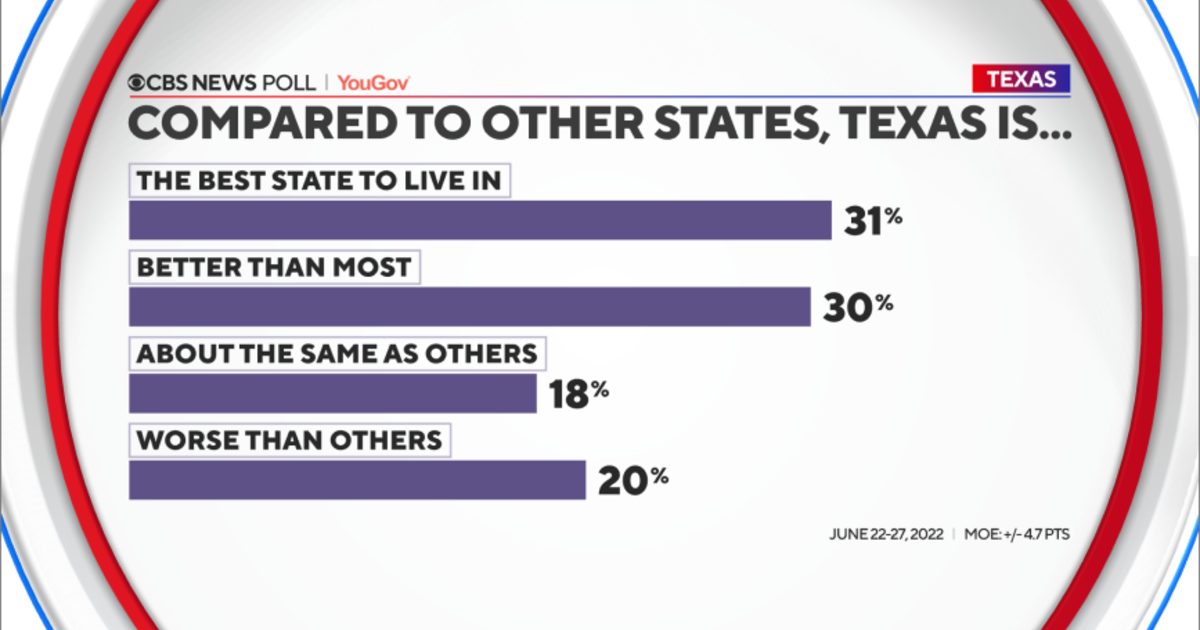 CBS DFW teamed up with CBS News and YouGov for a Texas poll. Most Texans take pride in their state, with three in 10 saying it’s better than most other states, and another three in 10 who think it’s the best state in the country to live in. They like the food, and they like the diversity of its people, and many see positive aspects in its values and culture, as well as its economy and businesses.

While many are critical of how things are going, more are positive about Texas than about the nation as a whole. On balance, they tend to like Texas becoming more racially diverse – but aren’t as thrilled with the impact of people moving in from other states.

What do people like and dislike about Texas today? Three in four like the food, but most also appreciate the diversity of its people. On balance, Texans tend to think their state’s culture and values are also a good thing. Texans are more mixed about the state’s economy and businesses, though more think they’re good than bad too.

Overall, Texans give their state lower marks on some other aspects of Texas life. Fewer than a quarter think the politics and government of Texas are good, or the cost of living. And few have good things to say about the weather. Those who think Texas has changed for the worse since they’ve lived in the state are particularly likely to mention it’s politics and government (60%) and its cost of living (57%) as examples of what is bad about Texas.

The idea of Texas becoming a more racially diverse population is viewed, on balance, as making things in Texas better rather than worse, and this is true of both White and non-White Texans alike, as well as Texans of all ages. But Texans are more conflicted when it comes to the impact of people moving to Texas from other states – more say this is making Texas worse rather than better (with older Texans who were born in the state more likely to say so than younger Texans and those who have come to Texas from elsewhere).

The biggest divisions are along political lines, by more than two to one, Democrats in Texas see people from other states moving to Texas as making things better, while Republicans overwhelmingly see this as making things worse. And while two in three Democrats in Texas think the state becoming a more racially diverse population is a good thing, Republicans are just as likely to say this demographic shift is making Texas worse as making it better. Some of this may be political self-interest: non-White voters have voted heavily Democratic in Texas in recent election cycles.

Politics in Texas and the Governor’s Race

By two to one, the politics and government of Texas are viewed negatively by residents of the state, and this is driven largely by Democrats, but by many independents as well. Republicans, who control the governorship and the state house, tend to view things in a more positive light.

This CBS News/YouGov survey was conducted with a statewide representative sample of 1,075 U.S. adult residents in Texas interviewed between June 22-27, 2022. The sample was weighted to be representative of adults statewide according to gender, age, race, education, and geographic region based on the U.S. Census Current Population Survey, as well as to 2020 presidential vote. The margin of error is ±4.7 points for the total sample.

U.S gives $1.7 so government can keep operating
Freya the walrus could be put down if crowds don’t steer clear
Clay Holmes blows save as Yankees woes continue with 3-2 loss to Red Sox in 10 – The Mercury News
Boston Police saves couple’s wedding by coming to the aid of stranded groom, vendors
Violence continues amid shelter-in-place warning