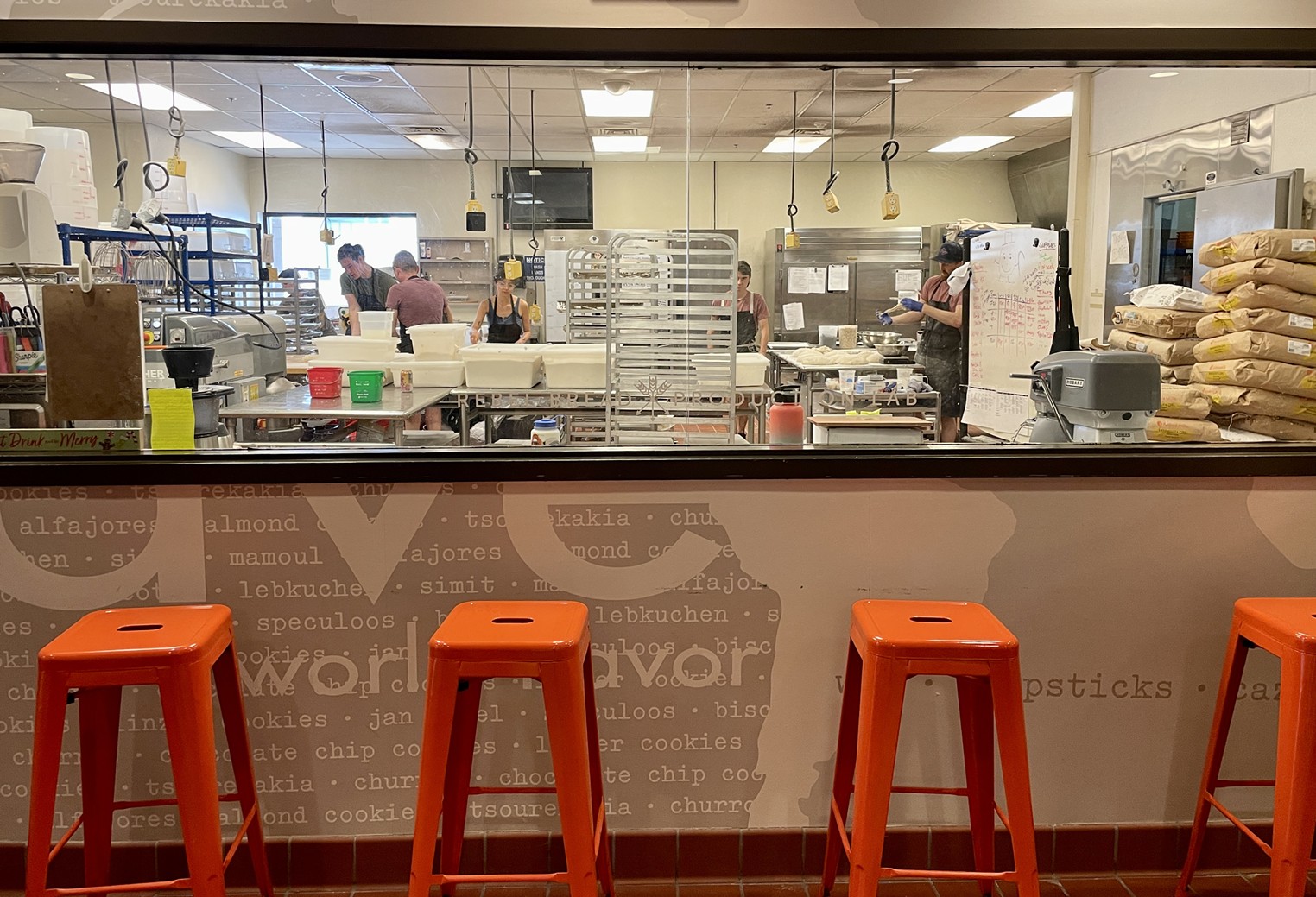 US
Share on Facebook
Share on Twitter
Share on Pinterest
Share on LinkedIn
Tucked away in the pale gray stone buildings of the Denver Design District on South Broadway, Rebel Bread is keeping the ovens hot, cooking up some of the best bread and pastries in the city. It’s taken over the space that was previously the Art Institute of Colorado’s culinary school, sharing the building with a few other local brands, including Pint’s Peak ice cream and Leven Deli’s bread team. Now, Rebel Bread is inviting bread enthusiasts into its kitchen for an up-close look at where it all happens during its Bakery Factory Tours.

If you’ve been to the City Park or South Pearl farmers’ markets recently, you’ve probably seen the gorgeous, golden-brown lineup of Rebel’s artisan loaves, flaky croissants and tender pastries. If you’ve braved the line, you also know that they taste even better than they look. During the tour, founder Zach Martinucci leads the way through the process of getting these goods from factory to market.

“Factory” is used loosely here. While the bakers surely stay moving — mixing, kneading and shaping upwards of 100 loaves of bread a day (and double that in pastries) — it isn’t on a mechanical, stainless-steel line. The culinary lab-turned-bakery is sunny and welcoming, earning the alternative name of Rebel Bread Production Lab.

The tour includes a pastry and coffee, sourdough tasting and a sample of sourdough starter to take home.

The tours are offered monthly (mostly on Saturdays), though a few extra dates have been added during the summer months. Right now, you can snag tickets ($15 per guest) for Thursday, July 14 and Saturday, July 30, with more dates to be added soon.

Arrive ten to fifteen minutes before the 11 a.m. tour kicks off so you can sip some coffee, savor one of the complimentary pastries and chat with fellow tour-goers in the little courtyard nestled in the parking lot. During the tour, you’ll get the opportunity to step into the production lab itself and ask the expert bakers questions as they turn flour into sourdough boules, ciabatta, rye, croissants and scones.

All of the sourdough bread that comes from Rebel is born out of Zach Martinucci’s starter named Paige (a little piece of which guests get to take home and care for after the tour). The sourdough isn’t the only thing with a nickname. The Rebel Bread team also lovingly introduces tour participants to its stand mixers, Esther and Greta, which together can mix over 140 loaves of bread dough at a time.

Martinucci shows off “Esther” the mixer, which can mix up to 100 loaves worth of dough at a time.

If the pastry at the beginning of the visit wasn’t enough — don’t worry. Martinucci will also slice up some signature sourdough bread as a delightful wrap-up snack. If you’re lucky, you may also get to try another specialty, like the Nonna G,  an ultra-fragrant bread that’s dotted with bites of sweet roasted garlic and chunks of rosemary and sage.

The story of Nonna G is a pivotal piece of Martinucci’s journey to creating Rebel Bread. “I grew up near San Francisco in a family that loves to cook and eat,” he says. “We weren’t professionals or anything.” He attended UCLA with a passion for food and self-coordinated a culinary twist to his degree in anthropology, focusing on culture through the lens of food. After completing a fieldwork project involving food and identities in Italy, Zach returned and helped his dad’s cousin open a French bakery in Lafayette, California. “My aunts and uncles and cousins all went to go help him get started,” he remembers, “like a family bake sale.”

The Nonna G sourdough is filled with whole cloves of roasted garlic and herb leaves.

It was that professional bakery experience that led to Martinucci’s passion for baking. In his college apartment, he would make and sell bread to neighbors and created special loaves based on his friends’ personalities. The aforementioned Nonna G was originally created after the death of Martinucci’s grandmother, inspired by the scents and flavors of her Sunday roast. He pursued a formal bread and viennoiserie program (which includes pastries made from laminated and enriched doughs, like croissants and brioche) at the San Francisco Baking Institute and moved to Denver soon after, opening Rebel Bread in 2018.

Since the beginning, the desire to do things differently has been bred into the aptly named Rebel Bread. From its online Bread School (including the flagship baking class Camp Bread, where participants are guided through a week of sourdough baking) to pairing up with fellow small bakeries like Moon Racoon Baking Co., Mile High Pie Co. and Pandemic Donuts to create the monthly subscription box Bread Club, the thoughtfulness around cultivating community is evident.

Beyond profits, Rebel Bread is intentional when it comes to the partnerships it forms. “In the sales sense, it’s like: where can we bring bread where there might not be artisanal bread already, or that it might just be a new experience,” Martinucci notes. “Somewhere where we can add an impact more than just the loaf that we’re bringing,” like with community-supported agriculture projects and the pay-what-you-can Globeville Community Farmers Market.

Rebel Bread’s retail counter is located at 675 South Broadway and is open from 8 a.m. to noon Friday through Sunday, 8 a.m. to 12 p.m. Its products are also available at the City Park and South Pearl Street farmers’ markets as well as at a variety of markets, coffee shops and restaurants around Denver. For more information, visit rebelbreadco.com.