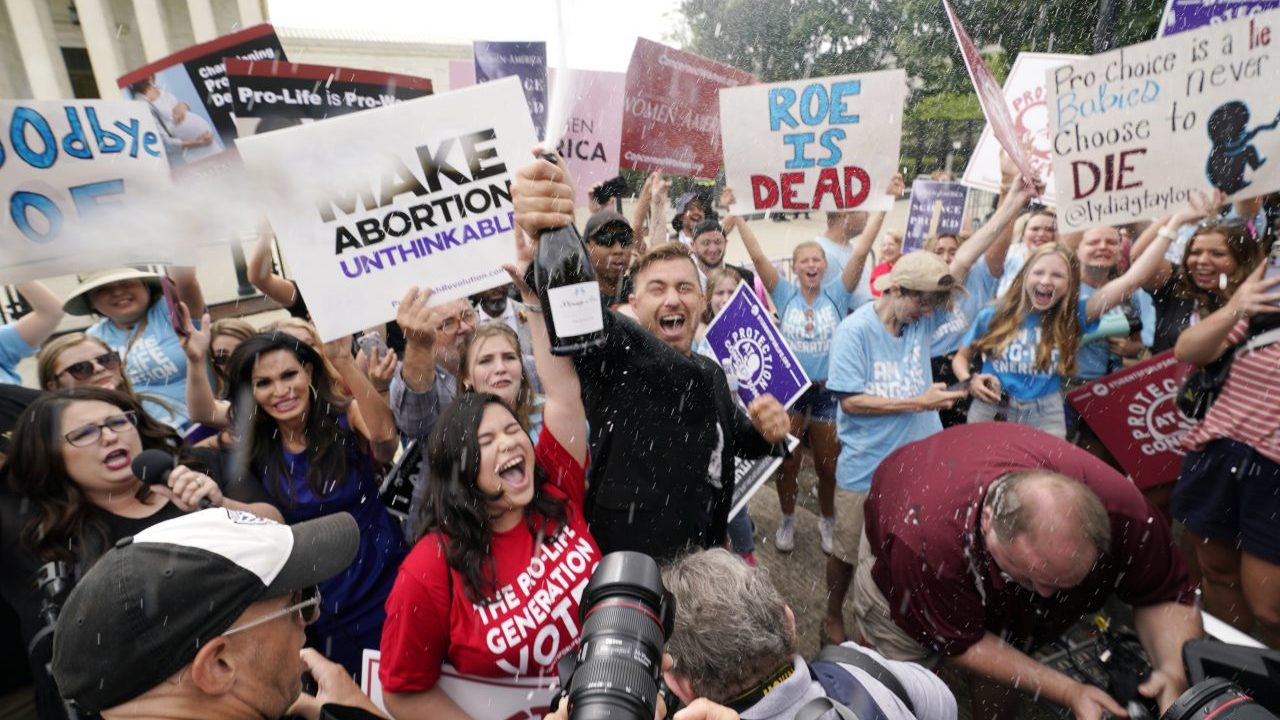 To make her case, Rubin cited a handful of examples where Republicans like South Dakota Governor Kristi Noem struggled to answer difficult questions posed by journalists over whether they supported abortion in extreme scenarios involving young girls who became pregnant from rape or incest.

Rubin also called out states whose abortion bans on the books do not allow exceptions for rape or incest, such as in Louisiana and Arkansas.

“The monstrous cruelty of such bills shows how little many conservatives care about the well-being of women and girls who have already experienced the unbelievable trauma of sexual violence,” she wrote.

The columnist did not point out that rape and incest allegedly make up a very small minority of abortions according to the latest data available. The widely cited pro-choice Guttmacher Institute’s 2004 survey, found just 0.5% of women sought abortion due to incest and 1% cited rape as the reason for securing an abortion.

People celebrate, Friday, June 24, 2022, outside the Supreme Court in Washington. The Supreme Court has ended constitutional protections for abortion that had been in place nearly 50 years, a decision by its conservative majority to overturn the court’s landmark abortion cases.
(AP Photo/Steve Helber)

Still, Rubin balked at laws that allow exemptions to save the life of the mother, saying that they were still “deadly for women” because she said they created “uncertainty.” Rubin also complained that maternal mental health was not considered a valid reason for abortion in many GOP-backed state laws.

MISSISSIPPI GOV. REEVES FOCUSES ON ‘CULTURE OF LIFE’ AFTER ROE V. WADE: ‘NOT SIMPLY ABOUT BEING ANTI-ABORTION’

“Forced-birth advocates can hardly be called ‘pro-life’ when they are willing to gamble with the lives and health of women. To say women will die because of abortion laws or will suffer untold harm, both mental and physical, is not hyperbole. It’s reality for women who are now deprived of the right to make their own decision about their health and even their lives.”

“When you treat women like less than competent adults, and insist that others, who may have little or no competency, weigh the risks to her health and life, you wind up not with a culture of life but a culture of devaluing women’s lives,” she wrote.

After the Supreme Court overturned the landmark abortion law in their Dobbs v. Jackson Women’s Health Organization ruling on June 24, some Democrats and media figures argued women would die as a result.

However, many of the viral claims that pregnant women will no longer be treated for life-threatening issues which require an abortion, aren’t true, according to some medical experts.

For example, treating ectopic pregnancies is legal in all states who’ve planned to ban abortion despite claims that doctors would no longer help women who experience this uncommon and dangerous pregnancy complication.

Even after the fall of Roe, polls still show inflation and gas prices dwarf voters’ concerns about abortion. A poll published Tuesday by Monmouth University found only 5% of respondents listed abortion as the biggest issue facing their family right now.

Kristine Parks is an associate editor for Fox News Digital. Story tips can be sent to kristine.parks@fox.com.

Judge rules Graham must comply with Georgia grand jury subpoena
Judge to discuss status of plea negotiations at Monday hearing for Thao, Kueng
How to save money with balance transfer credit cards
Teen Dead, 4 Others Injured in West Side Shooting – NBC Chicago
One dead, 17 hurt in crash outside Pennsylvania bar : NPR