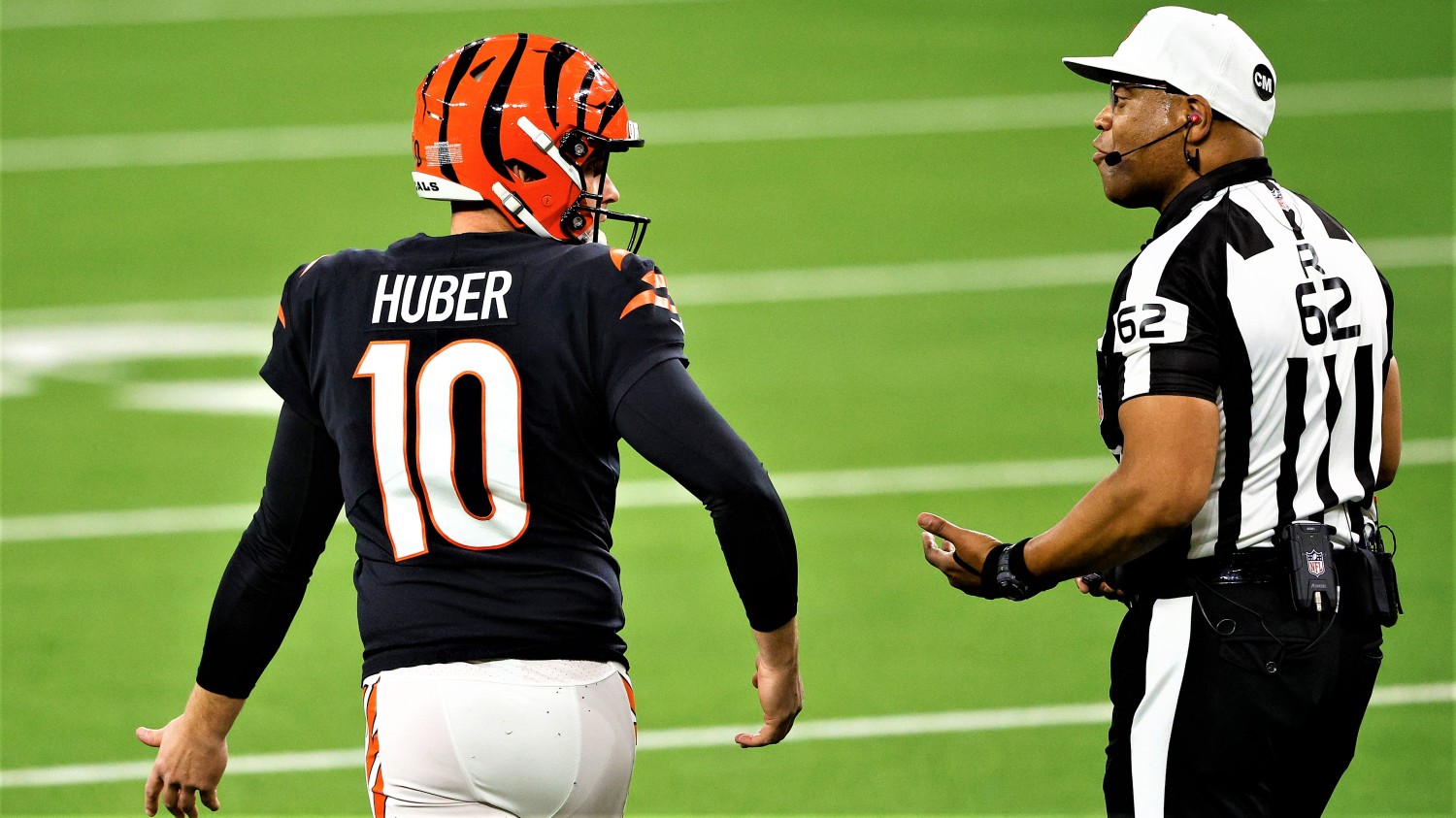 BOSTON (CBS) — We all wanted to tune in to the Super Bowl to watch a great game. Some funny commercials, a nostalgia-inspired halftime show, and some delectable food to complete the evening. Instead, we were treated to The Ref Show.

With the obvious caveat that officiating football games at the NFL level is difficult, you can’t help but come away from the Rams’ 23-20 Super Bowl win over the Bengals feeling a little bit cheated. The officiating crew made some massive gaffes that simply influenced the game too much.

That came in multiple forms. First, we saw it in the form of a missed call, like the obvious offensive pass interference and/or facemask penalty committed by Tee Higgins on his 75-yard touchdown reception to start the second half.

Tee Higgins definitely got away with one. Grabbed Ramsey’s facemask. pic.twitter.com/yg4yFxd9VY

In the interest of fairness, the grab of the facemask happened a lot quicker than it looked on replay. And the side judge chasing the play up the sidelines didn’t have a clear line of vision to the front of Higgins’ and Jalen Ramsey’s bodies. The call would’ve had to come from the back judge, who was in the middle of the field and likely didn’t see the quick flash of the penalty from his vantage point.

Still, it was a huge missed call, one where everyone in America except the officials on the field knew that a penalty had been committed.

Perhaps worse, referee Ron Torbert refused to even acknowledge that fact after the game.

That is, quite simply, an untrue statement from Torbert.

The lack of call on Higgins mostly fit in with the theme of the officiating for the night, which is to say the officials generally only threw penalty flags when they absolutely had to.

A total of three penalties were called in the first half: a false start, a delay of game, and an unsportsmanlike conduct for a fella from the Bengals sideline running onto the field in celebration after an interception. No judgment calls, no holding fouls, no pass interference penalties. The crew was just calling what was required.

No penalties were called in the third quarter. In the first 13 minutes of the fourth quarter, just one penalty was called, and it was a textbook post-whistle shove for unnecessary roughness against the Bengals.

That is how the game was being played. Some holding was going on downfield, some jerseys were tugged, some hand fighting and contact was happening, and the officials all let it go. That was the standard for how this game was allowed to be played.

That was … right up until the game’s most critical moment. It was at that point, inside the two-minute warning, with the Rams trailing by four points, that the officials on the field decided that minor contact down the field from Logan Wilson constituted defensive holding. It changed the game.

Defenders are allowed to have their hands on a receiver. If Wilson did commit a foul here — and it’s debatable if he did — then he did it with a slight twist of Cooper Kupp’s hips just before the ball arrived. If that was the foul that drew the flag, then it should have been a pass interference penalty, as the ball was already in flight. Instead, the call was for defensive holding, thus leading the viewing public to wonder what in the world the official had seen.

“I mean, I get it, he is in contact with him, but you look to try to see if there’s a jersey grab, if there’s an extension of the jersey, something more than that,” Pereira said. “They’ll talk about the two plays, and two wrongs don’t make a right. And it’s a myth. Make-up calls are a myth. But in fact when you look at those two plays — one Cincinnati’s way, one the Rams’ way — it’s a shame that we do have to talk about that. But that’s the nature of officiating. You hardly ever go unscathed.”

Going unscathed in this instance would have simply required the crew to do what it had done all night by allowing the players to play the game. In this particular instance, it would have required that the back judge — the same back judge who didn’t see the Higgins facemask — to not invent a foul that hadn’t really been committed.

So, instead of a fourth-and-goal for the Rams at the 8-yard line after a great play by Logan Wilson, the Rams had a first-and-goal from the 4-yard line. They’d score the game-winning touchdown shortly thereafter.

Missing this obvious false start ON THE ENTIRE OFFENSIVE LINE only to call a bad defensive holding penalty ON THE SAME PLAY is the perfect capstone to the worst season of NFL officiating EVER. https://t.co/OyPaAy6O54

After that, a less-discussed but very significant miss by the officials (and the replay official) might have cost the Bengals a first down. Trailing by three, facing a third-and-1 at the Rams’ 49-yard line, Samaje Perine took an inside handoff and made came awfully close to gaining the yard.

The yellow line, obviously, is not official, but Perine clearly gets the ball to the “L” on the NFL shield logo at midfield:

The ball, though, was sported well short of the “L”: At the very least, a booth review might have been warranted to double-check the spot on the field.

Alas, the review didn’t come, the Bengals failed on fourth down, and the Rams won their Super Bowl.

Often, emotionally charged conversations about bad officiating get misconstrued. A highlight on Twitter of, say, the missed false start on the biggest play of the game, will bring about 6,000 replies pointing out the missed facemask, as if to say both teams got a raw deal from the officials.

But … yes. Yes. That is almost exactly the point. Officiating in the Super Bowl need not be perfect, but when it comes to missing egregious fouls on game-changing plays like the Higgins facemask on Ramsey, and when it comes to inventing defensive holding penalties in the final minutes of a game when nothing of the sort had been called all game? They should be better than that. We’d all like them to be better than that. Alas, we get what we get, and then we get upset, and then … nothing changes. That’s the way things tend to go with the NFL.

I wish it were not so.

You can email Michael Hurley or find him on Twitter @michaelFhurley.