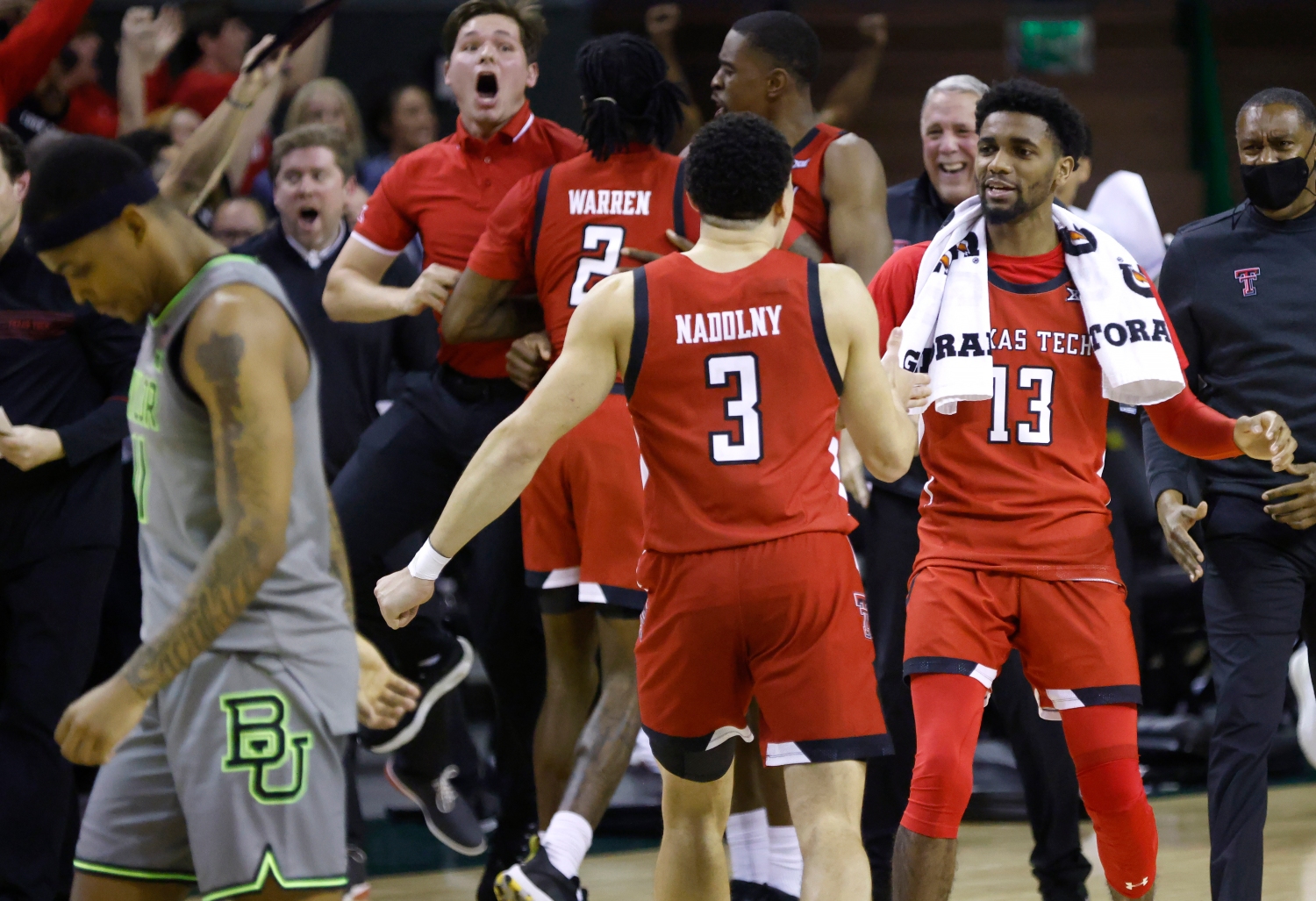 WACO, Texas (CBSDFW.COM/AP) — Texas Tech ended No. 1 Baylor’s nation-best winning streak at 21 games, getting 12 points and a key 3-pointer from Kevin McCullar in a 65-62 win over the Bears on Tuesday night, Jan. 11.

Adam Flagler and James Akinjo each had 17 points for Baylor (15-1, 3-1), which fell two short of matching its own Big 12 record of 23 consecutive wins set two seasons ago.

Baylor was the last Division I team to lose this season. Fifth-ranked Southern California (13-1) was also undefeated before a 75-69 loss at Stanford earlier Tuesday.

Davion Warren hit two free throws for the Red Raiders with 22 seconds left before a timeout. Baylor then moved the ball around with Flagler passing to Akinjo, who bobbled the ball at the top top of the key before gathering it and taking a 3-pointer that hit off the front of the rim as time expired.

Clarence Nadolny #3 and Mylik Wilson #13 of the Texas Tech Red Raiders celebrate with teammates following Techs 65-62 win over the Baylor Bears at the Ferrell Center on January 11, 2022 in Waco, Texas. (Photo by Ron Jenkins/Getty Images)

Texas Tech beat then-No. 6 Kansas at home on Saturday without McCullar and leading scorer Terrence Shannon, who also missed the game against the defending national champions.

Adonis Arms had 14 points for the Red Raiders, while Kevin Obanor and Bryson Williams had 13 each. Clarence Nadolny had 11 points.

McCullar had missed the previous two games after hurting his ankle in practice last week and having his foot in a walking boot. Shannon has missed six games in a row because of lingering back spasms.

The Bears scored the game’s first nine points, including two 3-pointers by Flagler. They had a 31-16 lead when Flagler hit his fourth 3-pointer with 6:13 left in the first half, but they didn’t score again before the break, with six missed shots and four turnovers.

Obanor had a dunk for Texas Tech only 10 seconds into the second half that started a quick 7-1 run. The Red Raiders tied it for the first time at 33-33 when Bryson Williams converted a three-point play with 18:28 left.

Texas Tech: The Red Raiders wrapped up a three-game stretch of games against top-11 teams, falling 51-47 at No. 11 Iowa State without McCullar and Shannon before the consecutive wins.

Baylor: The Bears had also won 22 consecutive home games, winning those by an average margin of more than 26 points. They had had won 34 of 35, the only loss in that span by three points to Kansas on Feb. 22, 2020.

Texas Tech: The Red Raiders host Oklahoma State on Thursday in the makeup of a scheduled Big 12 opener postponed from Jan. 1 because of COVID-19 protocols.