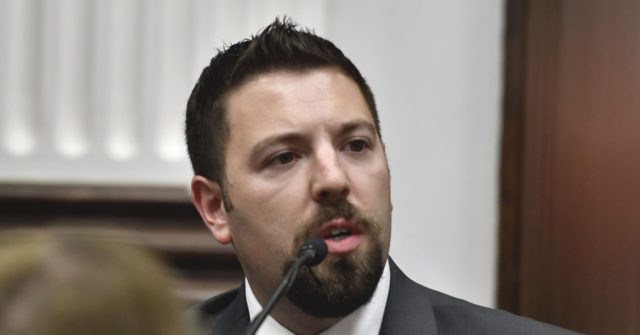 Rittenhouse, who was 17 at the time, is on trial for murder and related charges after shooting and killing two people and wounding another rifle in a melee shortly before midnight. Rittenhouse’s lawyers say that he was acting in self-defense.

Earlier in the day, Gaige Grosskreutz, the man who was wounded and survived, admitted under cross-examination by defense attorney Corey Chirafisi that he had pulled his own gun first, and had pointed it at Rittenhouse, on the ground.

The prosecution then called Detective Antaramian, and Chirafisi went to work again, eliciting an admission that police declined to execute a search warrant on Grosskreutz, and that Rittenhouse had only shot people who were pursuing him.

Chirafisi systematically worked through the other possibilities: “You’d agree there are multiple times, based on the surrounding circumstances, that he doesn’t pull the trigger, right?” After Antaramian seemed reluctant to agree, Chirafisi cited an example in which an unarmed person ran up to Rittenhouse, and then stepped back, and the latter did not fire.

Chirafisi: You saw other people that were kind of — it wasn’t a two or three-person chase, there were multiple people kind of around Mr. Rittenhouse, some of them brandishing weapons, correct?

Chirafisi: And those people who didn’t attack him — he didn’t fire at them, did he?

Chirafisi: The only people that he fired at were people that had either kicked him, hit him with something, or pulled a gun on him when he’s running down Sheridan Road, right?

Antaramian: I would agree with that statement.

Chirafisi: And after he — initially, when he sees Gaige Grosskreutz, you’d agree when Mr. Grosskreutz’s hands are up, he doesn’t fire?

Chirafisi: There is a person —  to Mr. Grosskreutz’s — it would be his left — with a metal pipe. Do you remember that?

Antaramian: I don’t –earlier, you called it a wooden club — I don’t know that I’ve ever seen wooden, or — off, fairly off in the distance there’s a metal pipe, yes.

Chirafisi: So people who are armed, he doesn’t fire at any of those people, does he?

Chirafisi: After the shooting, I counted — and I don’t, I’m not asking you for the specific number — but there’s multiple shots fired after Mr. Rittenhouse fires his last shout, right?

Chirafisi: He never turns and fires in that direction, does he?

Last year, then-candidate Joe Biden claimed, without evidence, that Rittenhouse was a white supremacist. No evidence to that effect has been presented to the court.

The trial resumes Tuesday in the Kenosha County Court.

Joel B. Pollak is Senior Editor-at-Large at Breitbart News and the host of Breitbart News Sunday on Sirius XM Patriot on Sunday evenings from 7 p.m. to 10 p.m. ET (4 p.m. to 7 p.m. PT). He is the author of the recent e-book, Neither Free nor Fair: The 2020 U.S. Presidential Election. His recent book, RED NOVEMBER, tells the story of the 2020 Democratic presidential primary from a conservative perspective. He is a winner of the 2018 Robert Novak Journalism Alumni Fellowship. Follow him on Twitter at @joelpollak.