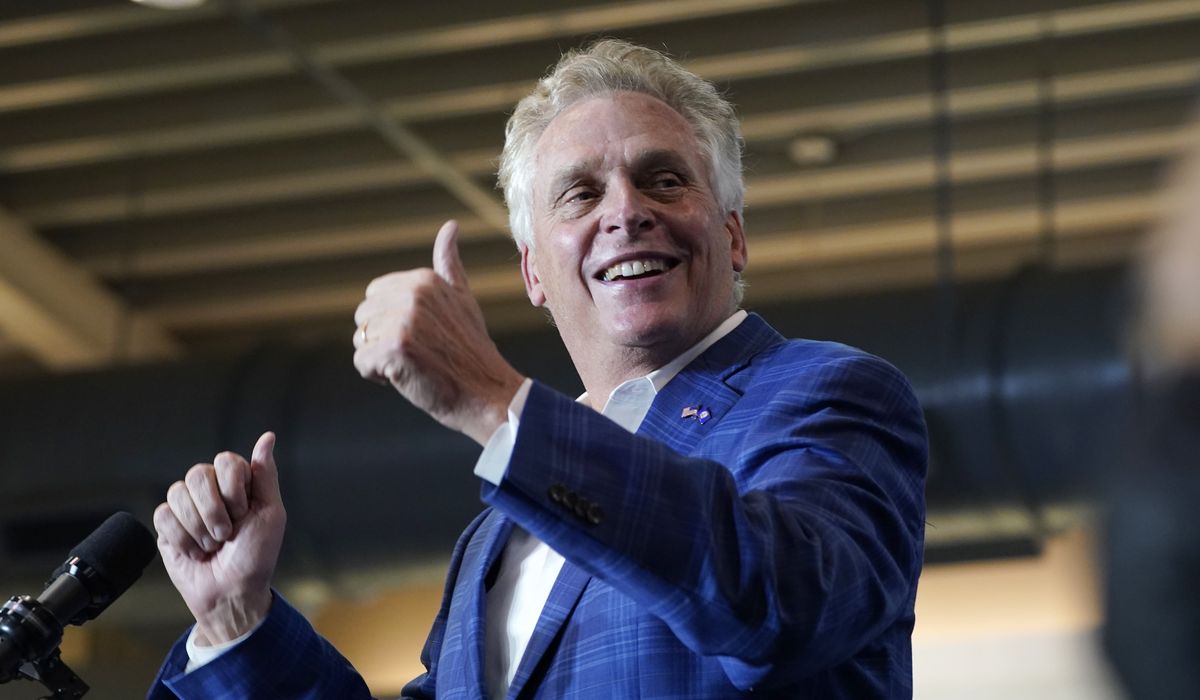 Mr. McAuliffe, who is neck-and-neck with Mr. Youngkin in the race for governor, urged his supporters to help rebuke Mr. Trump after the former president touted his relationship with Mr. Youngkin.

“He’s making good on his promise to excite the right-wing base,” Mr. McAuliffe said in a campaign fundraising email. “We’ve got to make sure we have the resources to fight back and turn out even more of our supporters.”

“Today Trump said that he and Glenn ‘get along very well together and believe in many of the same policies.’ We have rejected the racism, the hate, the division, and the lies of Donald Trump twice. And tomorrow, we will do it again,” he said.

Mr. McAuliffe, who served as governor from 2014 to 2018, has centered his campaign on tying Mr. Youngkin to Mr. Trump.

At recent rallies, Mr. McAuliffe has called his opponent an “acolyte of Donald Trump” and “Donald Trump in khakis.”

The former governor, however, insisted over the weekend that the race was about Mr. Trump.

“It is just killing Trump that he is not here, obviously,” Mr. McAuliffe told CNN. “I’d love to have him come in. But, you know … this is not about Trump.”

In response to Mr. McAuliffe’s comments, the Youngkin campaign put out an ad featuring the numerous times the Democrat has invoked Mr. Trump in interviews, ads and on the campaign trail.

In a Monday statement, Mr. Trump urged voters to turn out for the Republican candidate, though he added that he did not trust Virginia’s election process.

Mr. Trump also said he has a good relationship with Mr. Youngkin, rejecting any notion that the two don’t like each other.

“We get along very well together and strongly believe in many of the same policies, especially when it comes to the important subject of education,” Mr. Trump said in a statement. “The reason the Fake News and perverts are working overtime is to try and convince people that we do not like each other, and therefore, my great and unprecedented Make America Great Again base will not show up to vote.”

Mr. McAuliffe and Mr. Youngkin both have 48% of support, according to an Emerson College/Nexstar poll.

The poll, conducted Oct. 22-23, surveyed 875 very likely Virginia voters and had an error margin of plus or minus 3.2 percentage points.

Early voting closed on Saturday. Polls open at 6 a.m. and close at 7 p.m. on Tuesday.