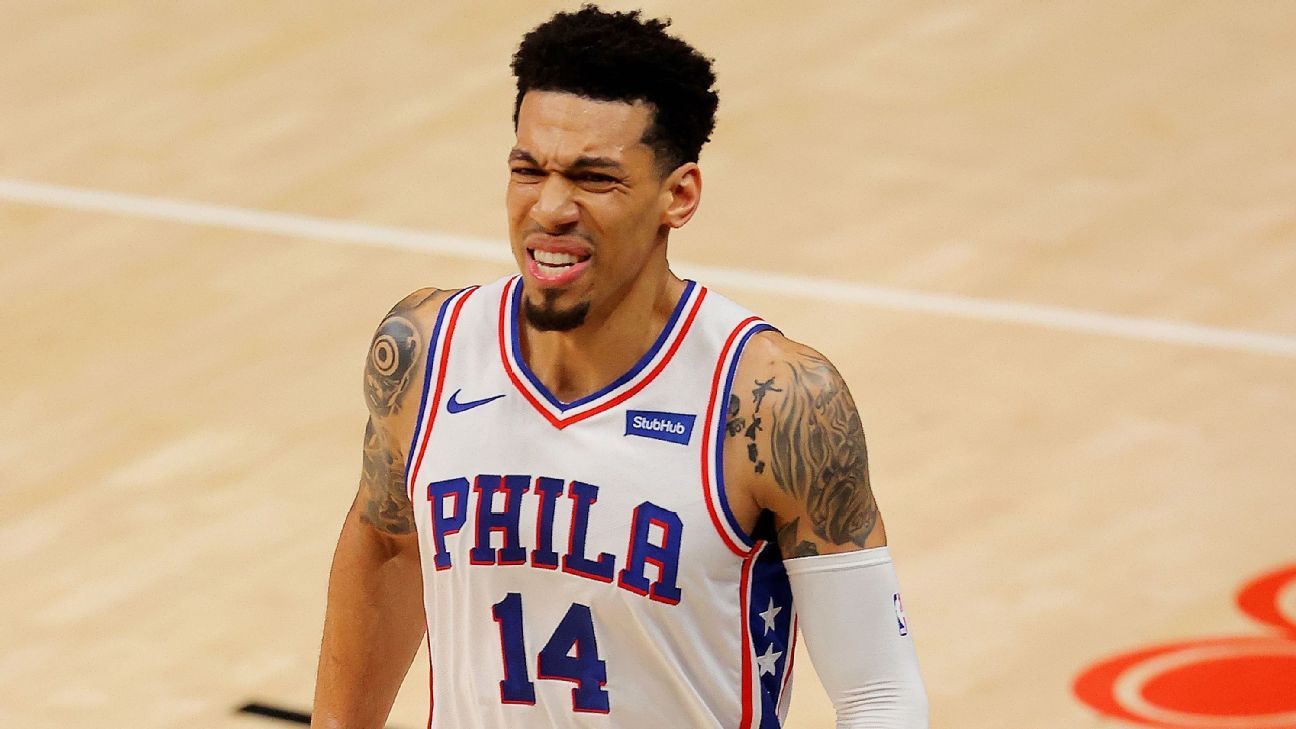 Danny Green will be re-evaluated in two weeks after an MRI confirmed he strained his right calf, the Philadelphia 76ers said on Saturday.

The injury occurred during the Sixers’ victory over the Atlanta Hawks in Game 3 on Friday night. The veteran will miss the rest of this series, and could return in the next round, if Philadelphia advances.

Green left with 8 minutes, 15 seconds remaining in the first quarter with Philadelphia up 6-4 and was replaced by Matisse Thybulle.

He returned to the bench in the second half wearing a boot on his right leg.

The three-time NBA champion averaged 4.5 points through the first two games of the second round, shooting just 1-for-9 from 3, but dished a career-high eight assists in Philadelphia’s 118-102 win in Game 2 to help even the series.

Thybulle finished with seven points, Furkan Korkmaz set a career playoff high with 14 and Dwight Howard had 12 to give Philadelphia’s second unit a boost.

“The next guy has to step up. Not sure who that is going to be yet,” coach Doc Rivers said after the win Friday.

Korkmaz started the second half in Green’s place. The Sixers are 32-7 this season with a starting lineup of Green, Joel Embiid, Ben Simmons, Tobias Harris and Seth Curry, according to data compiled by ESPN Stats & Information research.

“I don’t know the situation about Danny right now but it doesn’t matter who is in, who is out, we just need to step up. I just need to step up if I need to and I will do it,” Korkmaz, who started 11 games during the regular season, said Friday. “I am ready. I hope it’s not serious. I hope we’re going to get everybody healthy. But if he’s out, I’m definitely ready to step up.”

The Sixers lead the series, 2-1. Game 4 is Monday in Atlanta.

Like
Comment
Share
Processing
Voice note recorded successfully
Record
Recording 00:00
Commenting has been turned off for this post.
Sponsored
Categories
Read More
Real Estate
NYC house made of shipping containers sells for $5 million
We ship you not! A “green” home in Williamsburg constructed entirely of 21 shipping...
By Patabook News 2021-09-05 14:20:01 0 283
Movies
Mission: Impossible 8 Has Moved Forward, And This Time Tom Cruise Is Just Hanging Out On The Wing Of A Moving Airplane
Mission: Impossible 7 only just wrapped production, but all that means for Tom Cruise is that...
By Patabook News 2021-12-01 05:05:02 0 79
Women
Quick and Easy Chicken Breast Dinner! My Husband’s Favorite Food! Healthy chicken breast recipe
Quick and Easy Chicken Breast Dinner! Healthy and delicious chicken breast recipeEasy to...
By Patabook News 2022-05-26 03:10:01 0 23
Technology
Samsung Galaxy Z Flip 3 Leaked Renders Surface, August 11 Launch and Colour Options Tipped
Samsung Galaxy Z Flip 3 has been leaked in a new set of renders, which also hint that the next...
By Patabook News 2021-06-30 01:30:01 0 136
Cooking
TURMERIC CHICKEN AND RICE CASSEROLE | easy & healthy dinner recipe
A chicken and rice casserole with a healthy, turmeric twist! It’s just what you need for...
By Patabook News 2022-01-07 16:00:01 0 75