Seven People Dead, including gunman at a Virginia Walmrt 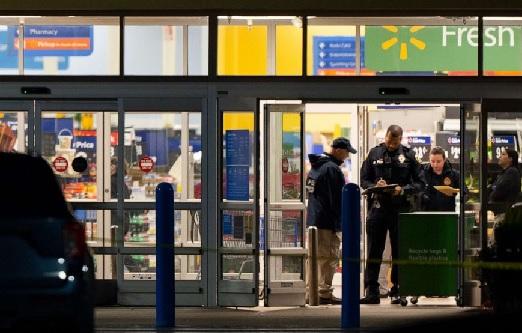 Seven people have died, including the shooter, after a shooting at the Walmart on Sam's Circle in Chesapeake, Virginia, Tuesday night, police said.

A law enforcement source told ABC News that "preliminary info is it was an employee, possible manager, went in break room and shot other employees, and himself."

Police could not confirm if the shooting was contained to one part of the store and said it's "very fluid, very new right now."

"We're only a few hours into the response, so we don't have all the answers yet," the city of Chesapeake tweeted. "Chesapeake Police continue their investigation into the active shooter event at Walmart on Sam's Circle. We do know there are multiple fatalities plus injuries and the shooter is confirmed dead."

Briana Tyler, an employee at the Walmart in Chesapeake, told ABC News that she and her coworkers were gathered in the break room at the start of their shifts when the shooting happened.

"I looked up and my manager just opened the door and he just opened fire," Tyler recalled during an interview Wednesday on "Good Morning America."

"He wasn't aiming at anybody specifically," she added. ""He just literally started shooting throughout the entire break room and I watched multiple people just drop down to the floor, where they were trying to duck for cover or they were hit."

Tyler told ABC News the gunman looked "directly at" her and fired but "luckily missed" her head by "an inch or two."

"He didn't say a word, he didn't say anything at all," she noted. "I literally hadn't even seen him before that point. He just came around the corner and started shooting. The first person that was in his eyesight, he shot him down and the next thing you know, he just started rigging throughout the entire break room, but he did not say a word."

Tyler told ABC News that she had heard from other employees when she first started working there about two months ago that "he was the manager to look out for because there was always something going on with him, just having an issue with someone."

"But I never expected it to get to this level of an issue, like I don't know of anything that had happened recently," she said.

"He was the manager that everybody, you know, had something to say about," she added. "[But] I would've never thought he would do something like this."

The Bureau of Alcohol, Tobacco, Firearms and Explosives is en route to the scene, ABC News can report.

"Our first responders are well-trained and prepared to respond. Our communications team is set up and will be releasing additional information as it's confirmed," Chesapeake Deputy Director of Public Communications Elizabeth Vaughn said in a statement.

Law enforcement sources tell ABC News authorities are investigating whether this was a case of workplace violence.

"I am devastated by the senseless act of violence that took place late last night in our City," West said in a statement on Twitter. "My prayers are with all those affected - the victims, their family, their friends, and their coworkers. I am grateful for the quick actions taken by our first responders who rushed to the scene. Chespeake is a tighknit community and we are all shaken by this news. Together, we will support each other througjout this time. Please keep us in your prayers.

Virginia Gov. Glenn Youngkin also made a statement regarding the shooting on social media in the early hours of Wednesday morning.

"Our hearts break with the community of Chesapeake this morning. I remain in contact with law enforcement officials throughout this morning and have made available any resources as this investigation moves forward," said Youngkin. "Heinous acts of violence have no place in our communities."