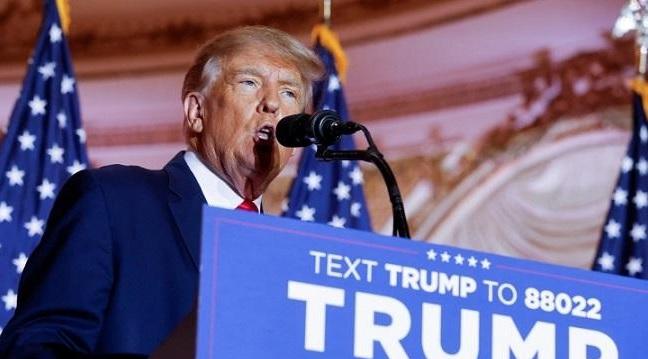 Donald Trump entered the 2024 US presidential race on Tuesday, making official what he’s been teasing for months just as many Republicans are preparing to move away from their longtime standard-bearer.

Minutes before an event to announce his candidacy, Trump’s campaign filed federal paperwork that he’s running again. He’s the first major contender from either party to formally declare.

“In order to make America great and glorious again, I am tonight announcing my candidacy for president of the United States,” Trump, 76, said in a gilded ballroom at his Mar-a-Lago resort in Florida.

The timing could not be worse for Republicans. Candidates endorsed by Trump floundered in key races in last week’s mid-term elections, as voters rejected election-deniers and others with extreme positions on social issues like abortion rights and education.

That cost Republicans their chance to reclaim the US Senate and left them short of the significant majority they had hoped to win in the House, though they were within one seat of gaining control as the former president spoke.

Since then, Trump has tumbled from virtually unquestioned party leader, whose endorsement carried enormous symbolic importance for down-ballot candidates, to an anchor dragging down the GOP. Many key Republicans and donors now want him to make way for a new standard-bearer like Florida Governor Ron DeSantis, who was reelected in a landslide last week.

He complained -- as he often does in his rallies --  about what he sees as America’s decline without him at the helm and said: “We are here tonight to declare it does not have to be this way.”

“We will immediately tackle inflation and bring it down to a level where it was,” Trump said. “Remember, economic security is national security.”

The fastest inflation in 40 years looms large in a Biden economic record that has, by some measures, outperformed Trump’s. US manufacturing jobs totaled 12.9 million last month, the most since 2008, part of a broader labor-market comeback that pushed employment past pre-pandemic levels. Retail gasoline prices, while still elevated, are off 25% from their high in June.

Biden has said he intends to seek re-election in 2024, but he has yet to make a formal announcement. Yet he tweeted during Trump’s speech, “Donald Trump failed America.”

Trump had sought to use his early announcement to freeze out other Republicans who might have entertained campaigning for the White House. Yet after the disappointing midterms, potential Trump challengers will be emboldened, according to Republican strategist and pollster Frank Luntz.

Trump’s 2024 campaign will be led by a cadre of strategists, including longtime GOP operative Chris LaCivita, Susie Wiles, chief executive officer of Trump’s Save America PAC and Brian Jack, a former political director in Trump’s White House, according to a person familiar with the matter, who asked for anonymity to discuss internal decisions.

Trump is trying to shift blame for GOP losses onto Senate Minority Leader Mitch McConnell, while lashing out at potential rivals who say the former president is acting as if he’s been pushed into a corner. He’s mocked DeSantis as “Ron DeSanctimonius,” threatened to reveal unflattering information about the governor should he run for president, and manipulated Youngkin’s name to make it sound Chinese.

DeSantis finally shot back at Trump on Tuesday during a news conference in Fort Walton Beach, Florida.

“When you’re leading, when you’re getting things done, you take incoming fire, that’s just the nature of it,” DeSantis said.

“At the end of the day I would just tell people to go check out the scoreboard from last Tuesday night,” DeSantis said, a veiled reference to his resounding win compared to the win-loss record for Trump’s candidates.

The record of Trump’s endorsed candidates who were on the ballot last Tuesday was 236-38, with eight races still being decided, according to a Bloomberg News compilation. But the former president’s hand-picked candidates lost at least six US Senate races, 12 House races and 11 governorships -- many that Republican strategists considered winnable with less extreme candidates.

Moreover, it’s unclear how Trump’s legal situation affects a potential candidacy. He faces multiple investigations into his removal of classified documents from the White House, as well as his role in attempts to overturn the 2020 presidential election that resulted in the deadly insurrection. Trump and three of his children have also been sued in New York for allegedly inflating the value of his real estate company’s assets.

Despite the GOP losses, Trump has a hard-core group of supporters who think he fights for them and will back him no matter what, said Republican strategist Alex Conant, a senior adviser for Senator Marco Rubio’s 2016 presidential primary campaign. Conant estimated those voters accounted for about 35% of the electorate in the 2016 GOP primaries, allowing Trump to win the nomination with a crowded field.

“No matter what, Trump’s the front-runner because if you start with 35%, it’s hard for somebody to beat you, especially in a crowded field,” Conant said.