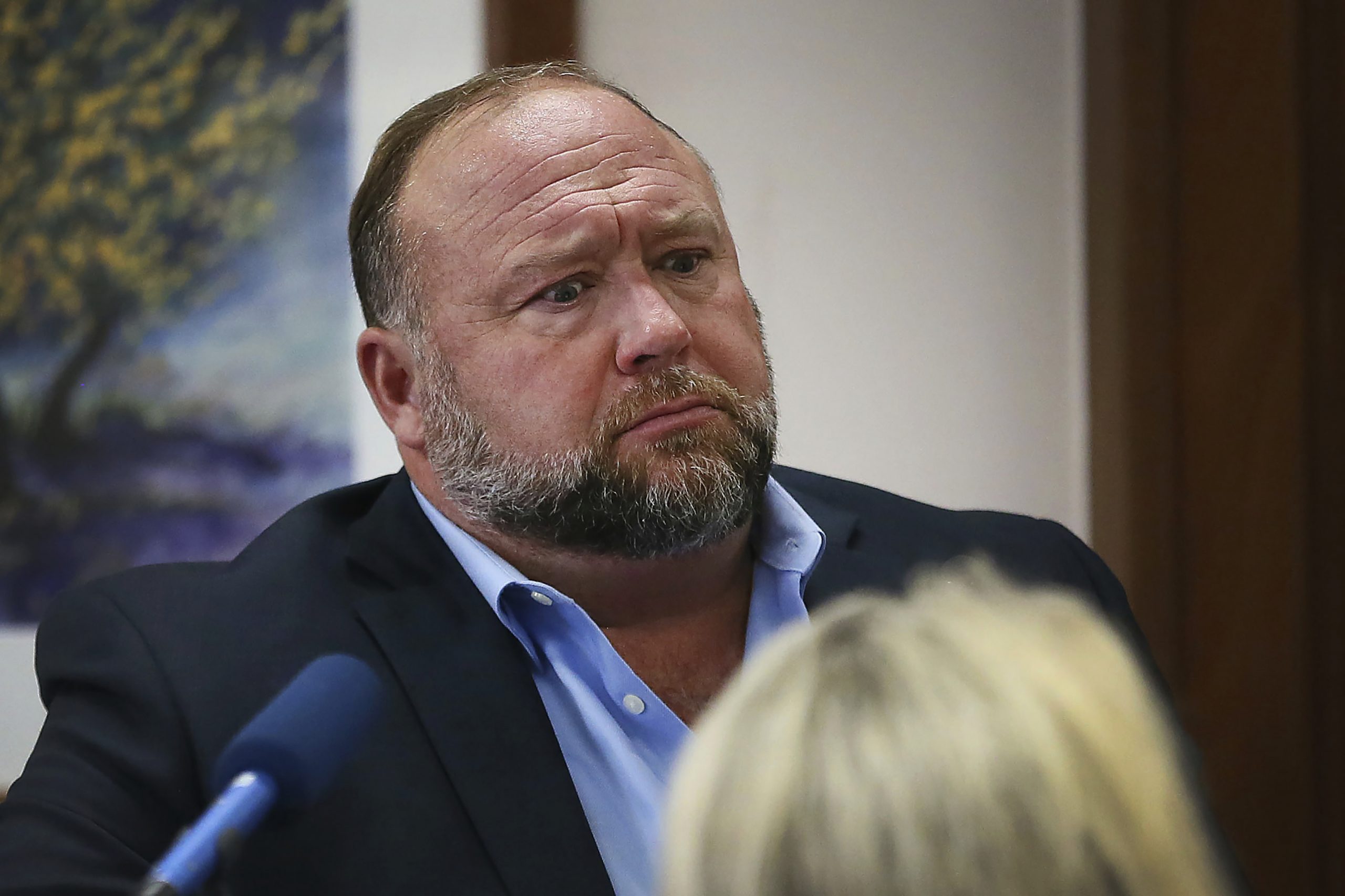 Earlier this week, Jones testified that any award over $2 million would “sink us.” His company Free Speech Systems, which is Infowars’ parent company, filed for bankruptcy protection during the first week of the trial.

Punitive damages are meant to punish defendants for particularly egregious conduct, beyond monetary compensation awarded to the individuals they hurt. A high punitive award is also seen as a chance for jurors to send a wider societal message and a way to deter others from the same abhorrent conduct in the future.

Attorneys for the family had urged jurors to hand down a financial punishment that would put Infowars out of business.

“You have the ability to stop this man from ever doing it again,” Wesley Ball, an attorney for the parents, told the jury. “Send the message to those who desire to do the same: Speech is free. Lies, you pay for.”

An economist hired by the plaintiffs testified that Jones and the company are worth up to $270 million, suggesting that Jones was still making money.

Bernard Pettingill, who was hired by the plaintiffs to study Jones’ net worth, said records show that Jones withdrew $62 million for himself in 2021, when default judgments were issued in lawsuits against him.

“That number represents, in my opinion, a value of a net worth,” Pettingill said. “He’s got money put in a bank account somewhere.”

The money that flows into Jones’ companies eventually funnels its way to him, said Pettingill, who added that he has testified in approximately 1,500 cases during his career.

But Jones’ lawyers said their client has already learned his lesson, and asked for lenience. The jury’s punishment should be less than $300,000, attorney Andino Reynal said.

“You’ve already sent a message. A message for the first time to a talk show host, to all talk show hosts, that their standard of care has to change,” Reynal said.

Jones — who was in the courtroom briefly Friday but not there for the verdict — still faces two other defamation lawsuits from Sandy Hook families in Texas and Connecticut that put his personal wealth and media empire in jeopardy.

Lawyers for the Sandy Hook families suing Jones contend that he has tried to hide evidence of his true wealth and have sued him claiming he’s tried to hide money in various shell companies.

During his testimony, Jones was confronted with a memo from one of his business managers outlining a single day’s gross revenue of $800,000 from selling vitamin supplements and other products through his website, which would approach nearly $300 million in a year. Jones called it a record sales day.

Jones, who has portrayed the lawsuit as an attack on his First Amendment rights, conceded during the trial that the attack was “100% real” and that he was wrong to have lied about it. But Heslin and Lewis told jurors that an apology wouldn’t suffice and called on them to make Jones pay for the years of suffering he has put them and other Sandy Hook families through.

The parents told jurors about how they’ve endured a decade of trauma, inflicted first by the murder of their son and what followed: gun shots fired at a home, online and phone threats, and harassment on the street by strangers. They said the threats and harassment were all fueled by Jones and his conspiracy theory spread to his followers via his website Infowars.

A forensic psychiatrist testified that the parents suffer from “complex post-traumatic stress disorder” inflicted by ongoing trauma, similar to what might be experienced by a soldier at war or a child abuse victim.

Throughout the trial, Jones has been his typically bombastic self, talking about conspiracies on the witness stand, during impromptu press conferences and on his show. His erratic behavior is unusual by courtroom standards, and the judge has scolded him, telling him at one point: “This is not your show.”

The trial has drawn attention from outside Austin as well.

Bankston told the court Thursday that the U.S. House committee investigating the Jan. 6, 2021, insurrection at the U.S. Capitol has requested records from Jones’ phone that Jones’ attorneys had mistakenly turned over to the plaintiffs. Bankston later said he planned to comply with the committee’s request.

Last month, the Jan. 6 committee showed graphic and violent text messages and played videos of right-wing figures, including Jones, and others vowing that Jan. 6 would be the day they would fight for Trump.

The committee first subpoenaed Jones in November, demanding a deposition and documents related to his efforts to spread misinformation about the 2020 election and a rally on the day of the attack.

Like
Comment
Share
Processing
Voice note recorded successfully
Record
Recording 00:00
Commenting has been turned off for this post.
Sponsored
Categories
Read More
US News
report – New York Daily News
The teen who died after plummeting from a 430-foot-tall drop-tower in Orlando slipped from his...
By Patabook News 2022-05-04 20:00:01 0 30
Sports
CJ Cup moving from Las Vegas to South Carolina
10:59 AM ET Associated Press PONTE VEDRA BEACH, Fla. — The CJ Cup is on the move...
By Patabook News 2022-06-29 15:50:02 0 17
Entertainment
The 15 Best Sweat-Proof Beauty Products To Help You Beat the Heat This Summer
We independently selected these products because we love them, and we think you might like them...
By Patabook News 2022-05-19 16:30:01 0 28
Sports
UCI Track Nations Cup: Great Britain claim double silver in team pursuit in Glasgow
Venue: Sir Chris Hoy Velodrome, Glasgow Dates: 21-24 April Coverage: Watch on BBC Sport...
By Patabook News 2022-04-22 01:10:02 0 30
US News
Millions Of Bees Die On Airport Tarmac After Delta Reroutes Flight
Millions of honeybees are dead after a flight carrying the pollinator insects from California...
By Patabook News 2022-04-30 18:00:01 0 66