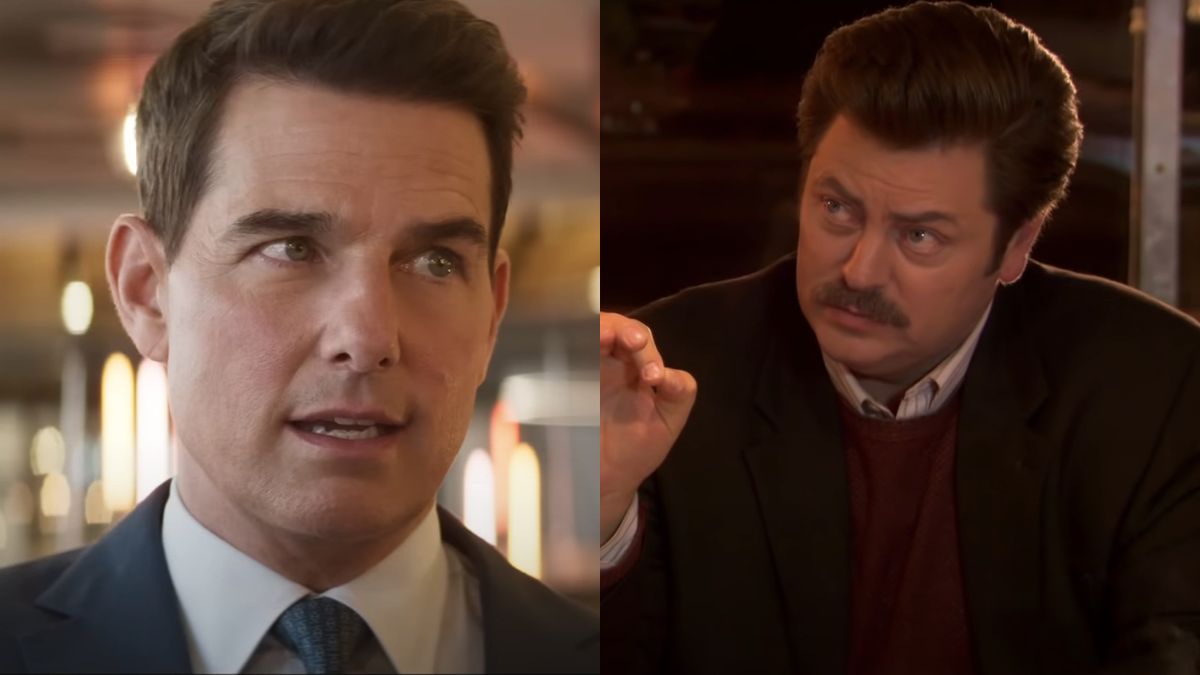 As we continue to anticipate the delights promised on the 2023 movie schedule, Mission: Impossible – Dead Reckoning is poised to thrill Tom Cruise fans two years in a row. As the first half of this two-part story drops next year, the second half we like to call Mission: Impossible 8 is currently in production. Prepare for the anticipation to rise even more, as cast member Nick Offerman has told a pretty awesome story of working with Cruise and writer/director Christopher McQuarrie on the next sequel.

As a preview for its 200th episode, the Mission: Impossible focused podcast Light The Fuse released a snippet of what to expect from what’s shaping up to be a huge episode. Part of that came from remarks made by both Christopher McQuarrie, as well as Nick Offerman himself; addressing the film’s production in the context of McQuarrie’s metaphor of “drinking from the firehose.” The Parks and Recreation vet detailed his “fascinating” experience with the following description, firehose included:

You honestly need to listen to Nick Offerman talking about his role in Mission: Impossible: Dead Reckoning – Part Two. Reading those words is one thing, but Offerman’s always been an actor with an impressively rich speaking voice. Even in his choice of words, the affection that the actor had for the experience with “lead guy” Tom Cruise is seriously brilliant.

As Nick Offerman is an accomplished author and woodworker, that artistic analogy itself paints a picture of a set full of people hard at work, making the impossible happen. Although, Offerman’s words aren’t all  we’ve got to go by when it comes to his Mission: Impossible: Dead Reckoning – Part Two experience.

Should the theory that Eugene Kittridge’s return is on the side of evil, that means one of two things. Either Nick Offerman’s military officer, with the last name of Sydney, is being manipulated by Kittridge’s big scheme, or he’s in on the fix from frame one. If a guess was to be made, the latter scenario seems more plausible, otherwise why isn’t Sydney in Mission: Impossible – Dead Reckoning Part One?

IMF agents, you’re going to have to wait before you can be truly debriefed on the answers to such questions surrounding Mission: Impossible – Dead Reckoning. The first half will be released into theaters on July 14, 2023; with Part Two wrapping up the story, and possibly Ethan Hunt’s time in the field, on June 28, 2024.

Which means your mission, should you choose to accept it, is to revisit almost all of the Mission: Impossible films in their current streaming home. (Mission: Impossible III is the only duck missing from the row at the time of this writing.) Make sure your Paramount+ subscription is up to date, and this message will self-destruct in five seconds.