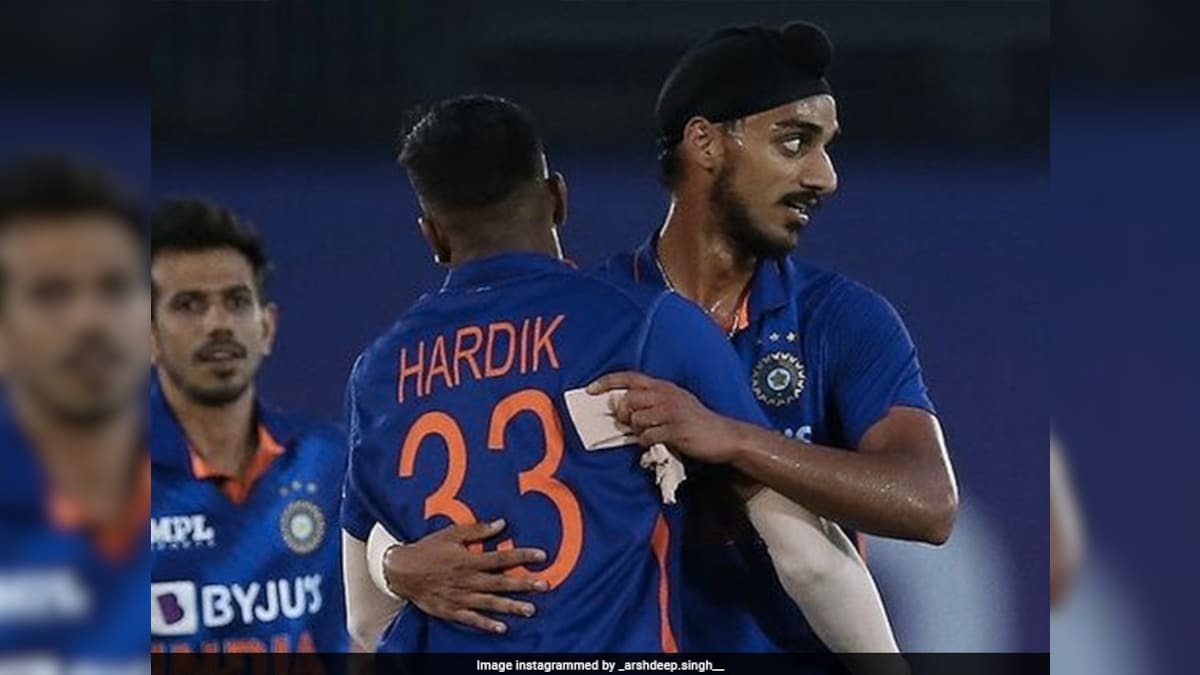 Young Indian pacer Arshdeep Singh said that using variations, especially the slower ones, on a sticky wicket was the key to his success in the T20 series-opener against the West Indies. Arshdeep (2/24 in 4 overs), who featured in the first T20I against England at Southampton earlier this month, picked up two wickets on his return to the national side. “It was a good experience. I am happy with my performance. The team won, so the happiness doubled. Due to a break, I am playing after a long time. So, I want to work with Paras (Mhambrey) sir and improve on my areas,” Arshdeep said at the press conference.

“I guess, keeping things simple and using the wicket a lot and using the slower one and at the last just trying to nail my yorkers, I think that worked for me.” Playing in only his second game for India, Arshdeep attributed the clarity of his role in the team to his success.

“I was pretty aware of my roles and responsibilities. Both the team management and the captain briefed me about my role as a bowler when I have to come to bowl and all.

“That gave me a lot of clarity and confidence and I could plan accordingly. The way Bhuvi bhai bowls, he keeps the pressure at one end and that helps me to get wickets.” While in his very first over, Arshdeep was taken to the cleaners by Kyle Myers, he got rid of the batter in the fourth ball of his opening spell.

“He (Mayers) was attacking from the start and he came out hard and could have taken a chance on the bouncer but my gut instinct told me that I should go for it and it paid off.” The 23-year-old also acknowledged Dinesh Karthik‘s role (41 not out from 19 balls) in taking India to a solid 190-6.

“DK bhai played a great cameo and that gave us a good cushion as bowlers and the wicket was also sticky. As a bowling unit, we bowled in the right areas.” While Arshdeep removed Mayers with a bouncer, all-rounder Akeal Hosein was done in by a pitch-perfect yorker.

The West Indies were eventually restricted to 122 for 8 to slump to yet another loss as the visitors won the match by 68 runs.

(This story has not been edited by NDTV staff and is auto-generated from a syndicated feed.)

Topics mentioned in this article

Like
Comment
Share
Processing
Voice note recorded successfully
Record
Recording 00:00
Commenting has been turned off for this post.
Sponsored
Categories
Read More
Real Estate
Buying Greenland: Trump’s Most Insane Real Estate Deal Yet?
The Wall Street Journal reports that President Trump has expressed interest in purchasing...
By Patabook News 2022-08-28 17:50:02 0 62
Entertainment
It has been a popular topic within discussions in WoW
Cross-faction play isn't all the WoTLK Gold update to be announced this week. In another...
By Lowes Emily 2022-11-11 18:57:56 0 31
US News
Texas shooter Salvador Ramos posted on Facebook that he was going to shoot up school
The 18-year-old maniac who slaughtered 19 children and two teachers at a Texas elementary...
By Patabook News 2022-05-25 18:00:01 0 89
Sports
Payton breaks elbow; Kerr: Brooks ‘broke code’
10:20 PM ET MEMPHIS, Tenn. — Memphis Grizzlies forward Dillon Brooks was ejected less than...
By Patabook News 2022-05-04 15:50:02 0 119
Sports
Ex-Real Madrid star Marcelo joins Olympiakos
6:13 PM ET Marcelo will be back in European competition with Olympiakos this season. Oscar...
By Patabook News 2022-09-03 09:00:02 0 39