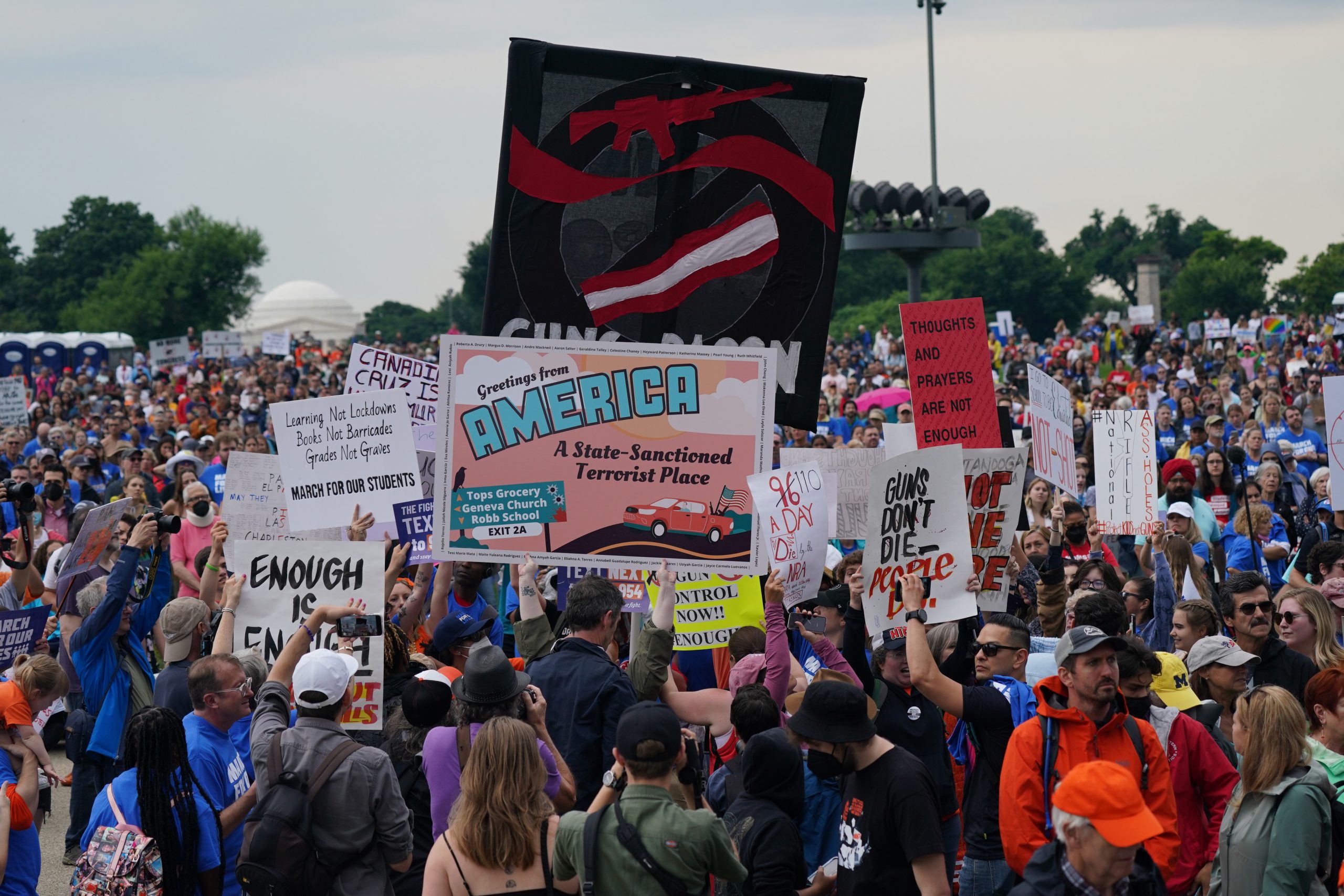 President Joe Biden said Saturday that gun safety “has to become an election issue,” while praising Americans who are rallying for reform in Washington, D.C. in the wake of multiple mass shootings across the country.

His remarks come after recent shootings in New York, California, Texas, and Oklahoma, among others, have left dozens of adults and children dead in the past several weeks. The frequency of gun violence in the country has reignited a national debate about gun control and safety, with Biden calling upon Congress to pass urgent reform measures.

On Saturday, thousands of people gathered in D.C. and other cities across the nation to similarly demand action. The rally was organized by March for Our Lives, a student-led movement that was formed after 17 people were killed in a shooting at Marjory Stoneman Douglas High School in Parkland, Florida, in 2018.

“Keep marching. It’s important. Look, this has to become an election issue. The way people say ‘this isn’t going to affect my vote,’…too many people are dying, needlessly,” the president said in response to the rally, according to CNN. “What’s being proposed in the House and Senate is marginal. It’s important, but it’s not all that needs to be done… the answer is march.”

Earlier this month, Biden called on Congress to either ban the sale of assault weapons, or raise the age to purchase them from 18 to 21. He also called for a ban on high-capacity magazines, increased background checks, and enabling national “red flag” laws to give loved ones or police the chance to prevent individuals who might pose a threat from purchasing a gun.

The president added Saturday that he is “mildly optimistic” about Congress soon reaching a modest bipartisan deal. Lawmakers will need at least 10 Republican votes in order to clear the 60-vote threshold to break a filibuster and pass legislation. Historically, gun legislation has faced an uphill battle in the Senate, with Republicans typically blocking measures over fears that they will impede on Second Amendment rights.

However, Senator Chris Murphy, a Connecticut Democrat leading the bipartisan negotiation efforts, told reporters last week that he’s been discussing reform “in a more significant way right now with Republicans and Democrats than ever before,” while adding that he believes a bipartisan deal can be reached.

The D.C. rally at the Washington Monument featured a slate of speakers and activists who urged that “enough is enough,” and called for immediate measures to end gun violence.

“If our government can’t do anything to stop 19 kids from being killed and slaughtered in their own school, and decapitated, it’s time to change who is in government,” said David Hogg, co-founder of March for Our Lives, and a survivor of the 2018 shooting.