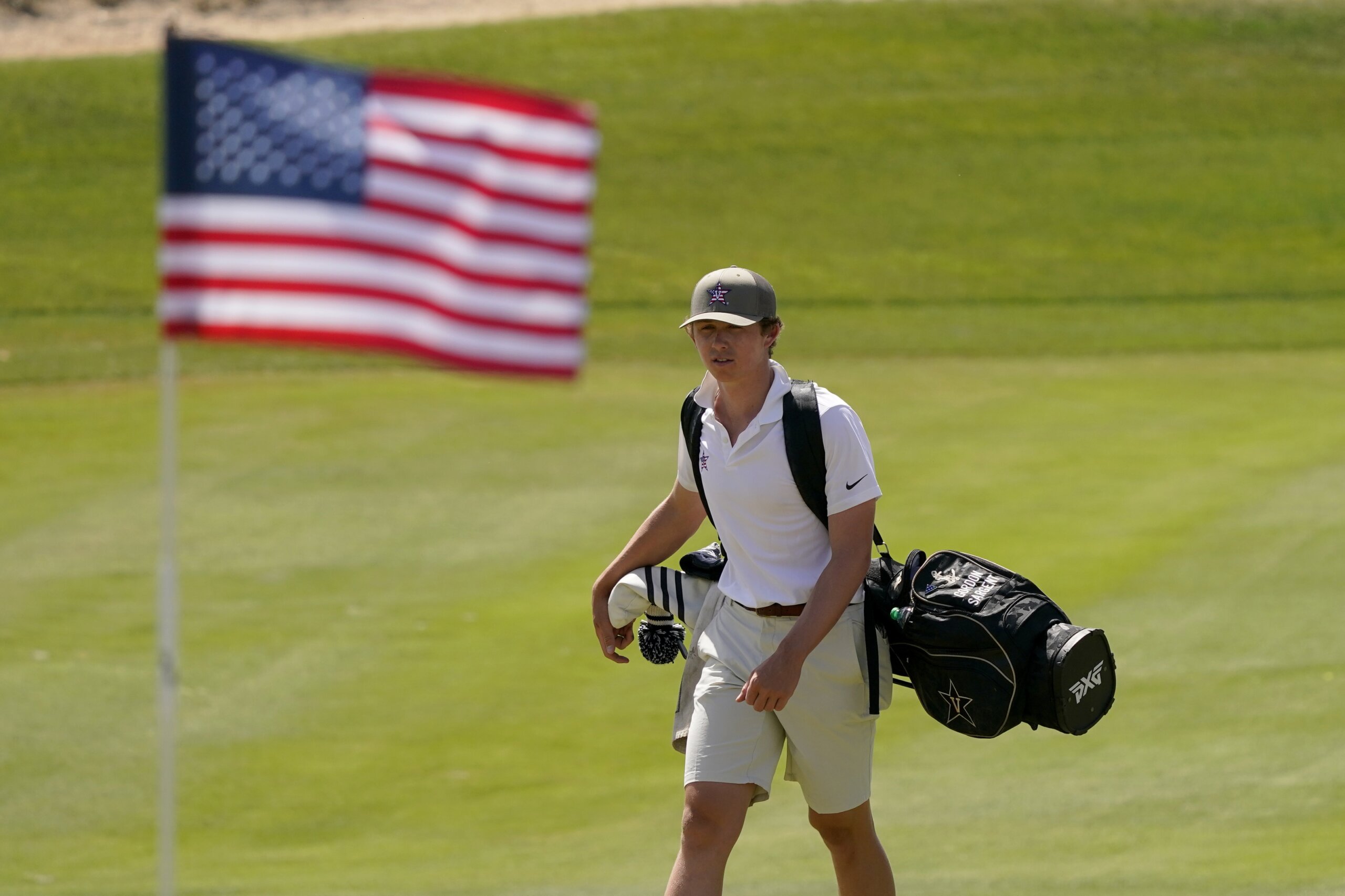 SCOTTSDALE, Ariz. (AP) — Vanderbilt’s Gordon Sargent curled in a short birdie putt on the first hole of a four-man…

SCOTTSDALE, Ariz. (AP) — Vanderbilt’s Gordon Sargent curled in a short birdie putt on the first hole of a four-man playoff on Monday to become the ninth freshman to win the NCAA individual title.

Sargent didn’t have a birdie during a 4-over 74 at Grayhawk Golf Club, but made the playoff when Oklahoma State’s Eugenio Lopez-Chacarra three-putted for bogey on the par-4 17th. Sargent hit a huge drive on 520-yard, par-4 18th in the playoff and put his second shot six feet below the hole.

Texas senior Parker Coody chipped it close from short left of the green on his birdie try, and North Carolina senior Ryan Burnett missed a long birdie putt. After Lopez-Chacarra missed a par putt — he was well left of the green — the stage was set for Sargent.

The Haskins Award finalist from Birmingham, Alabama, slipped the putt in on the left edge, sending a roar through the crowd and his teammates rushing onto the green in celebration. He is the first freshman to win the individual title since Southern California’s Jamie Lovemark in 2007.

The four players finished at even-par 280 on Grayhawk’s Raptor Course.

Oklahoma senior Chris Gotterup missed two short birdie putts on the back nine and three-putted for bogey on No. 18 to miss the playoff by one.

A day after Oklahoma’s Patrick Welch shot 63, gusty winds and fast greens gave players fits most of the afternoon. Coody and Burnett moved up the leaderboard by shooting even on a day when seven of 84 players shot under par.

Sargent entered the final individual round with a one-shot lead over Gotterup after both shot 68 in Sunday’s third round.

Sargent labored in the tough conditions through the front nine, finishing with three bogeys and no birdies. He still managed to tie for the lead at 1 under, but a bogey on the par-3 16th dropped him a shot behind Lopez-Chacarra. He parred the last two holes, tying for the lead when Lopez-Chacarra had a three-putt bogey at the 17th.

Burnett, who started the final round four shots back at even par, had three birdies to make the turn at 1-under 34. He went to 1 over with bogeys on Nos. 11 and 15, but pulled into a tie for the lead with a birdie on No. 17.

Coody started his final round on No. 10, four shots back, and made the turn in 2-over 37. The Texan reeled off three straight birdies starting on No. 3 to tie Sargent for the lead at 1 under, but closed with a bogey on the par-4 ninth to fall one back.

Like Sargent, he ended up in the lead with Lopez-Chacarra’s bogey on 17.

Lopez-Chacarra overcame a triple bogy on the long par-4 seventh and tied Sargent for the lead with a short birdie on the par-4 15th. Lopez-Chacarra moved into the lead by one as the others faltered, but hit his tee shot on the short par-4 17th under a bush.

He managed to chop it out, only to three-putt across the multi-tiered green, setting up the playoff.

Like
Comment
Share
Processing
Voice note recorded successfully
Record
Recording 00:00
Commenting has been turned off for this post.
Sponsored
Categories
Read More
US News
Chicago police officer shot, hospitalized
CHICAGO (CBS) — A Chicago police officer from the 12th (Near West) District was shot and...
By Patabook News 2022-07-01 15:00:02 0 58
Fashion
#Moodboard: Inside the Mind of Violette Serrat, Guerlain’s Creative Director of Makeup
Photography courtesy of Guerlain“Makeup should never be used to ‘better’ who...
By Patabook News 2022-09-29 22:55:02 0 37
Technology
Polycystic Ovarian Syndrome Market Size, Share, Major Companies, Revenue Analysis, Till 2030
The polycystic ovarian syndrome market is expected to witness tremendous growth owing to the...
By Jason Miller 2022-11-25 04:28:26 0 4
US News
Indian American student choked by peer receives harsher punishment than his bully from Texas school
A viral video of a Texas student choking an Indian American peer has sparked a petition against...
By Patabook News 2022-05-18 01:00:01 0 83
US News
MBTA shuts down service on Green and Orange Lines due to garage structural issue
BOSTON – A structural problem with the Government Center Parking Garage is causing issues...
By Patabook News 2022-06-24 00:00:02 0 62