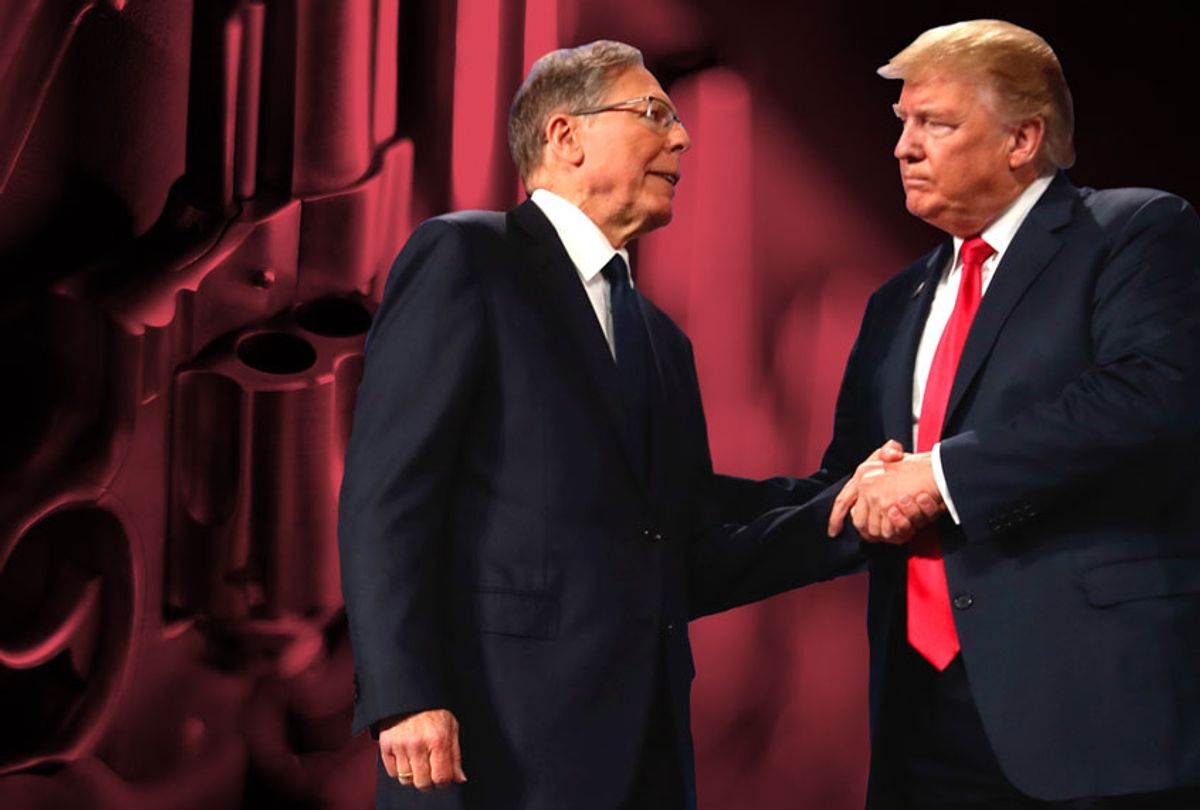 This Friday, May 27, former President Donald Trump is scheduled to speak at the National Rifle Association’s “leadership forum” — which will be part of its three-day convention in Houston, Texas. Guns will be allowed during other parts of the convention, but not during the leadership forum — an “irony” that journalist Lauren Tousignant slams as “almost too disgusting and predictable to even bother pointing out” in an article published by the feminist website Jezebel on Tuesday night, May 24.

Tousignant’s article was written the day on which yet another horrific mass shooting occurred in the United States. Earlier on May 24, at least 19 children, along with two adults (including 4th Grade teacher Eva Mireles), were fatally shot at Robb Elementary School in Uvalde, Texas. The gunman was identified by police as 18-year-old Salvador Ramos, who was also killed.

The massacre in Uvalde — which is about 80 miles west of San Antonio — came only ten days after a mass shooting on May 14 at a supermarket in a heavily Black area of Buffalo, New York, where ten people were killed. In that massacre, according to law enforcement, the suspect was motivated by white supremacist ideology and targeted his victims simply because they were Black. A possible motive in the Texas rampage, however, remains unclear.

Tousignant, commenting on the carnage in Uvalde and the NRA’s “leadership forum” event with Trump, writes, “Here we are again: another mass shooting, a million more worthless thoughts and prayers, and a bunch of hypocritical politicians who don’t want firearms allowed inside an event that’s being held by the very organization that lobbies said politicians to pass laws that make it easy for anyone to buy a gun and bring it wherever the hell they want. Like a shopping center. Or an elementary school.”

A post on the NRA convention’s website notes that “per the U.S. SECRET SERVICE, firearms, firearm accessories, knives, and other items WILL NOT BE PERMITTED in the General Assembly Hall.”

“For the record, the NRA also banned guns when Trump and Mike Pence were scheduled to speak at their 2018 convention, again citing the Secret Service’s wishes,” Tousignant explains. “Seems to me like a true, gun-toting American wouldn’t let the Secret Service bully their precious gun rights — guns don’t kill people, people kill people — but what do I know?”

Tousignant adds, “In addition to Trump, confirmed speakers include Texas Gov. Greg Abbott (R), who, in June 2021, signed into law a bill that now allows Texans to carry a handgun without training or a background check or a license. Next on the roster is South Dakota Gov. Kristi Noem (R), who, in March, signed into law a bill that gets rid of fees for concealed gun permits. And of course, Ted Cruz is slated to be there — the Texas senator who, in the aftermath of Tuesday’s massacre, tweeted ‘fervent’ prayers for the bereaved and told reporters that, obviously, “Democrats will try to politicize this by limiting guns.”

The fact that guns are banned from the “leadership forum,” according to Tousignant, underscores the hypocrisy of the NRA and the Republican politicians who support the organization.

“When the aforementioned policies are the very thing that keeps allowing these atrocities to take place, what other fucking option do Democrats, or really anyone, have other than to look to the politicians who are refusing to do anything about it?” Tousignant writes. “If the NRA really believe guns were not the problem, they would allow anyone to carry them at their own fucking events.”

Like
Comment
Share
Processing
Voice note recorded successfully
Record
Recording 00:00
Commenting has been turned off for this post.
Sponsored
Categories
Read More
Women
Halsey May Take a Break After Recent Endometriosis Struggles
Image Source: Getty/ Axelle/Bauer-Griffin/FilmMagic History repeats itself with Halsey at this...
By Patabook News 2022-04-26 04:55:02 0 92
Technology
Amazfit Band 7 With 18 Days Battery Life to Launch Later This Year: Report
Amazfit Band 7 is reportedly heading for a launch later this year. The smartwatch from Amazfit...
By Patabook News 2022-07-04 17:55:02 0 40
US News
Don’t let the door hit you in the …
The Boeing Corporation isn’t the first sharpie to show up in Chicago with a smooth patter and a...
By Patabook News 2022-05-08 21:00:01 0 37
US News
State-of-the-Art Medical Center Coming to Bronzeville – NBC Chicago
Northwestern Medicine announced on Thursday a major new medical center is coming to the South...
By Patabook News 2022-06-03 02:00:01 0 76
Entertainment
Disney Employees Getting Two Extra Days Off To “Recharge” As Company Gears Up For Return To Office
Employees from the film and TV divisions of the Walt Disney Co. will be getting additional...
By Patabook News 2022-04-22 08:50:01 0 62