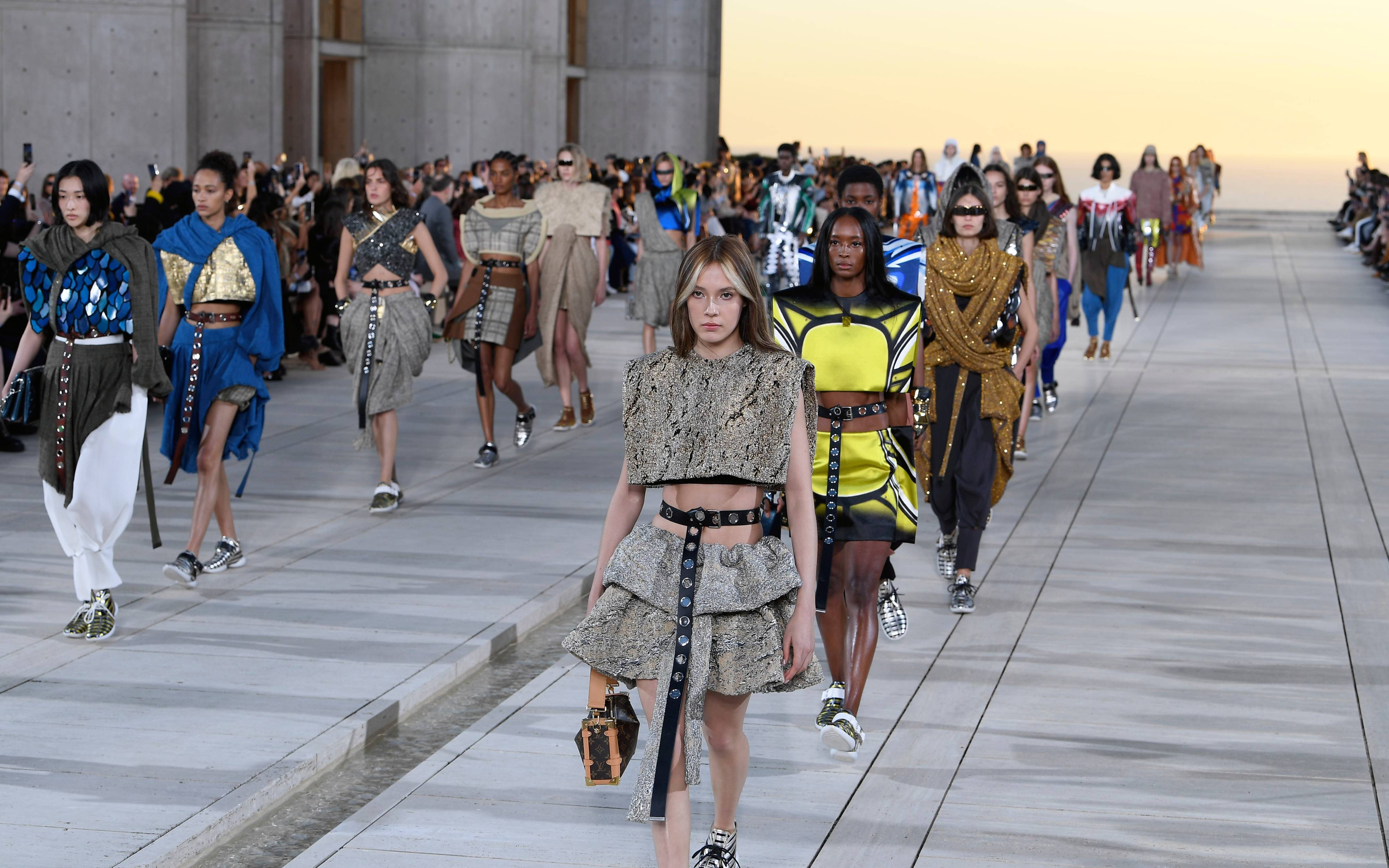 Everyone has their rituals when buying new shoes. Some walk around the store. Others might jump up and down on the spot. But my friend and I put prospective purchases through a “run away test.” What is the run away test, you might ask? It’s about checking to see if we can literally run away while wearing a new pair of footwear. Run away from what, exactly? Well, that part we haven’t quite figured out. Maybe it’s from a bad date? Or perhaps it’s from an impromptu alien invasion? Either way, we’re no damsels in distress.

And clearly, creative director Nicholas Ghesquière has the same mentality as every shoe in the Louis Vuitton Cruise 2023 show fit this very specific criteria — metallic tennis shoes, buckled black sneakers with bulbous platforms, sequined boots with a thick sensible heel. These women are ready to run from whatever otherworldly creature descends upon them. As each runway look served major #maincharacter energy, I wouldn’t be surprised if Dune’s costume designer plucked some of these looks directly for Zendaya for the newly announced sequel.

The collection was a cinematic interpretation of the sun, heat and light, as glimmering metallic fabrics were the lineup’s shining stars (pun intended). And cinematic was truly the only word that came to mind while watching models descend the makeshift catwalk at The Salk Institute — a nonprofit organization dedicated to biomedical research and considered one of the architectural wonders of the world — as the San Diego sun was setting, casting a glow on the already shimmery and costume-like gowns, matching sets and sporty separates.

But with the light comes the dark. As luxurious tweeds, jacquards and silks glistened in the last bright hours of the day, the Louis Vuitton Cruise 2023 collection was also telling the story of a dystopian future, where clothing acts as an armour (a popular theme amongst designers for Fall 2022) protecting us from the elements, another pandemic or maybe even ourselves. Some references were more obvious, as intricate draping evoked images of ancient Roman (or Dune) warriors, and medieval knights got modernized with silver chained tops and shiny pants. Other outfits alluded to more of an emotional shield, with oversized hoods and cocoon-like shapes, which one could go as far as to say connects to the pandemic. And then some just had straight-up UFOs as shoulder pads.

And to capture this profound study in dualities, the creative director could not have chosen a better location. Ghesquière told WWD that he chose it because “The Salk Institute has been a place of wonder for me over the years, and Louis Kahn’s stunning Brutalist architecture against this extraordinary setting of the Pacific Ocean and the California sunset provides me with endless inspiration.”

The outdoor courtyard presented itself as a beautiful community and melting pot of earth, air, and water in the sunlight. But once the light faded, the concrete jungle and looming buildings had a distinctly dystopian feel, perhaps even a place you might want to run away from. Good thing Louis Vuitton Cruise 2023 has got your shoes covered.

Swipe through the gallery below to some of the looks from the runway.