Fireball Erupts After Truck Hits Another Vehicle On Ohio Highway 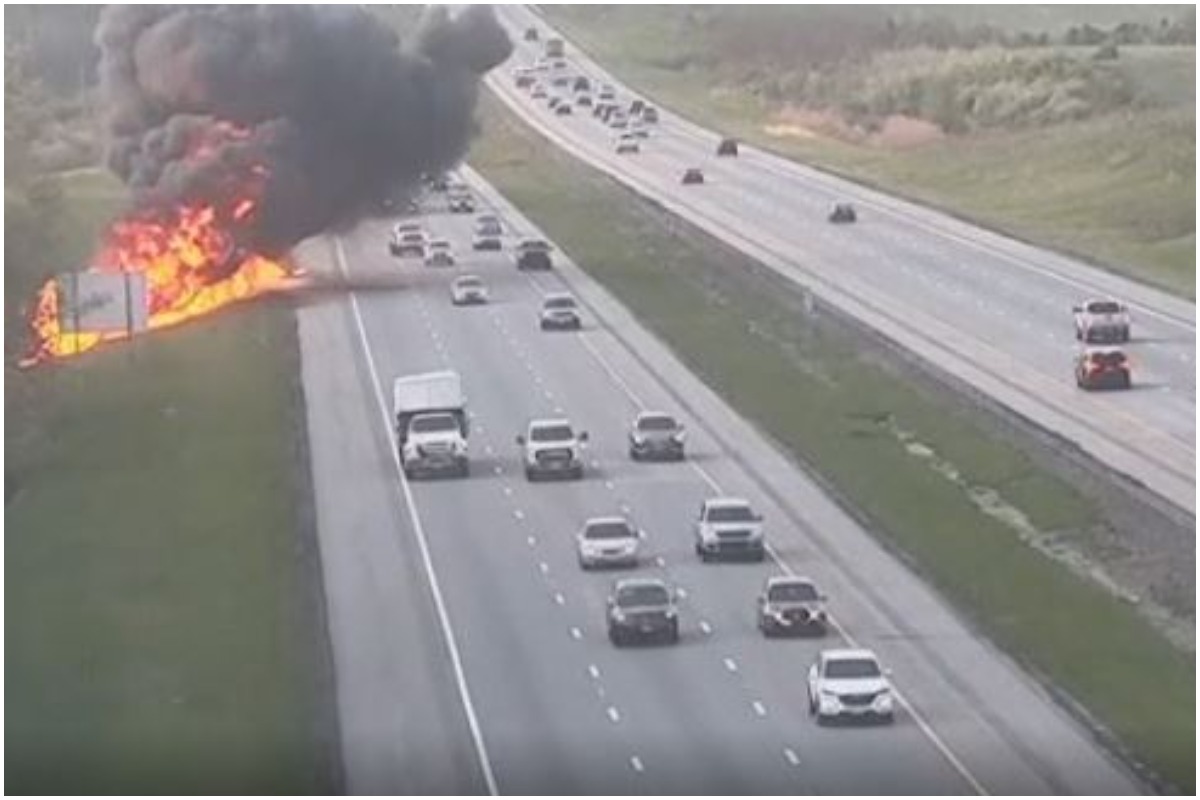 Several lanes were blocked on an Ohio highway and two people were injured when a fiery crash and explosion involving a dump truck and a government vehicle took place on Thursday morning.

Summit County Sheriff’s Office said in a statement that the truck, traveling the I-77 North, struck an Ohio Department of Transportation (ODOT) vehicle that was on the shoulder at around 7.20 p.m. on Thursday near Graybill Road interchange in the city of Green, in Summit County, Ohio.

Video footage of the incident showed the dump truck driver veering off the road onto the shoulder, where the ODOT truck was stationed. The two vehicles collided and careered off the highway, and immediately exploding and bursting into a huge ball of flames. A massive plume of smoke then engulfed the highway.

The sheriff’s office confirmed the crash caused the two vehicles to explode.

Surrounding trees were also on fire, according to emergency services scanner traffic.

Emergency responders arrived on the scene, and quickly transported both drivers to hospital. The truck driver has life-threatening injuries, while the transportation department driver is seriously wounded, but their injuries are not considered life-threatening, Summit County Sheriff’s Office said.

“Our highway worker, better yet, our brother, a husband, a father and a grandfather suffered serious injuries but it is nothing short of a miracle that he survived,” Gery Noirot the O.D.O.T. District 4 Deputy Director, told WOIO.

“We’ll let the Summit County Sheriff’s office do their investigation to determine what happened this morning but what I can tell you is I hear, far too often, from our folks is that they see drivers paying attention to things other than the road way and this has to stop.”

The crash caused delays on the I-77 North out of Summit County into Stark County during commuting time.

Only on Monday, a 5-week-old baby girl died in a car crash as her mother sped away from police after she allegedly stole baby items from a Louisiana Walmart, police said.

Each year in the U.S., more than 46,000 people die in road accidents, according to the Association For Safe International Road Travel. The national traffic fatality rate is 12.4 deaths per 100,000 inhabitants.

Every year, an additional 4.4 million people are injured seriously enough in car crashes in the U.S. to require medical attention.

The economic and societal impact of road crashes costs U.S. citizens $971 billion per year, while the direct medical costs are around $380 million.

America suffers the most road crash deaths of any high-income country, about 50 percent higher than similar countries in Western Europe, Australia, Canada, and Japan.

Like
Comment
Share
Processing
Voice note recorded successfully
Record
Recording 00:00
Commenting has been turned off for this post.
Sponsored
Categories
Read More
US News
Nicor Gas, Operation Warm Distribute 252 Winter Coats To Students At Harvey’s Whittier Elementary – CBS Chicago
HARVEY, Ill. (CBS) — Nicor Gas and the nonprofit Operation Warm distributed 252 coats to...
By Patabook News 2022-01-15 02:45:02 0 72
Sports
Is Solskjaer papering over cracks or have Man United turned a corner?
6:07 PM ET Rob DawsonCorrespondent MANCHESTER, England — Only time will tell what...
By Patabook News 2021-10-21 05:30:02 0 89
Travel
Sparkling Wines And Champagnes Are The Tip Of The Spear In The Premiumization Of Alcohol
The recent report from the Union des Maisons de Champagne, the trade organization representing...
By Patabook News 2022-03-23 22:05:02 0 23
US News
Foxx, Lightfoot Announce Gun Charges in Deadly Austin Gunfight That Led to Tension Between Officials – NBC Chicago
Months after publicly clashing over a deadly shootout in Austin, Mayor Lori Lightfoot and Cook...
By Patabook News 2022-02-11 09:50:02 0 39
Homes
How to Build a Patio: DIY Paver Patio | The Home Depot
If you’ve ever wondered how to build a patio, or how to lay pavers, you’ve come to the right...
By Patabook News 2022-02-25 06:40:01 0 38