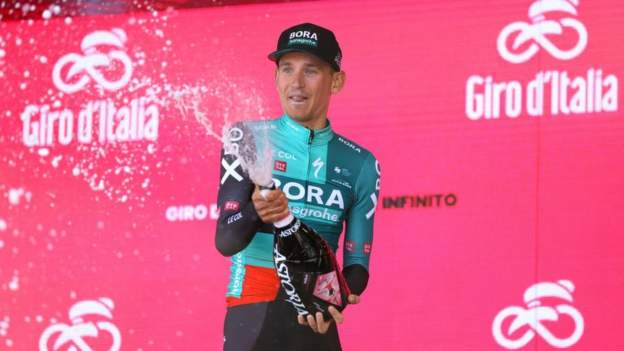 Germany’s Lennard Kamna won stage four of the Giro d’Italia in Sicily, finishing one second ahead of Spain’s Juan Pedro Lopez after a gruelling climb up Mount Etna.

Lopez moved into first place in the general classification.

The pair broke away on the 172km stage, finishing 34 seconds ahead of Estonian Rein Taaramae at altitudes reaching 1,892 metres above sea level.

The peloton, led by Belgian Sylvain Moniquet, were over two minutes behind.

Britain’s Simon Yates was part of that group, as were race favourites Richard Carapaz and Romain Bardet.

That group were six minutes adrift of the breakaway when they began the 23km climb up Etna, but managed to cut the lead to two minutes 37 seconds by the finish.

Yates drops from second to fourth place overall, while previous race leader Mathieu van der Poel of the Netherlands lost significant ground early in the climb and finished 22:54 down as the tour arrived in Italy with a first mountain stage following three stages in Hungary.

Lopez, 24, is now 39 seconds ahead of Kamna in the overall standings.

“I don’t care how much my lead is, I just want to savour the moment,” Lopez said. “I don’t know how long I can keep the pink jersey.”

The tour stays in Sicily for stage five from Catania to Messina on Wednesday. The 21-stage race concludes in Verona on 29 May.