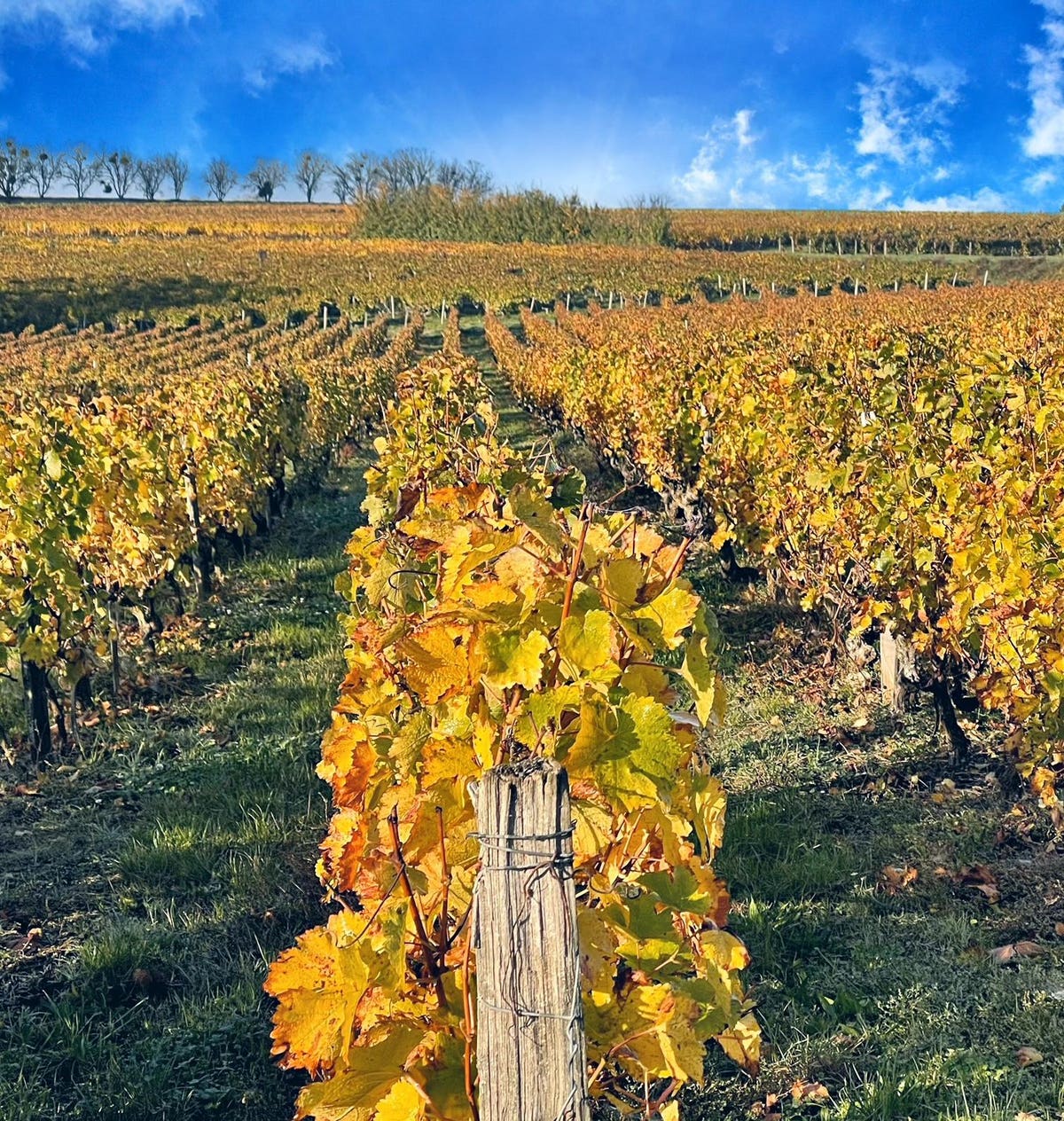 It is a late October morning in Vouvray. The blanket of fog from the Loire River is receding, revealing veiled sunlight. The air is crisp, the temperature brisk. A short jaunt up a steep and narrow incline, enough to get the heart pumping after a croissant and cappuccino, from the troglodyte cave cellars of Clos de Nouys, takes me to one of the oldest vineyards in the appellation, dating back to 1907, on an estate that traces its roots to the fifteenth century.

Cresting the ledge, I see a slightly undulating, open field covered with vines in spun gold, woven with fading emerald, flaming ruby, and fiery orange sapphire leaves. Small groves of trees dot the landscape. The ground is lush, rich with fall grasses and herbs. The soil dark, moist, alive. Deep below lies the foundation of Vouvray: tuffeau soil, a mineral-rich limestone from the Cretaceous.

Within Clos de Nouys resides Clos du Gaimont, a single parcel, 10 acres, of this idyllic Vouvray terroir. Producing wines that flirt between sweetness and liveliness, this vineyard yields some of the best Chenin Blanc of the appellation. Harnessing this unmatched terroir in each glass is the winemaker’s charge.

To honor that terroir, Domaine Chainier implemented extensive sustainable practices in the 1990’s, producing wine under France’s Haute Valeur Envionmentale (HVE) Level Three certification. For decades the HVE certification was enough to signify to the consumer their sustainable philosophy and practices.

I asked winemakers from Muscadet Sèvre et Maine to Pouilly-Fumé about why they were moving to certify. Each time the answer was the same: consumer demand.

Are American wine drinkers specifically requesting certified organic wines? If so, what is behind this movement?

To understand more, I spoke with Whitney Schubert, French Portfolio Manager for Polaner Selections (importer of Domaine Henry Pellé in the Loire). She said that while requests for organic wines from New York City customers have been steady for over a decade, “the demand and the interest in various iterations of sustainable farming and low-intervention winemaking, have only intensified in recent years.” Furthermore, the requests have broadened beyond the city.

Schubert believes the organic wine movement began with environmentally conscious winegrowers sharing their experiences of embracing organic, biodynamic, and sustainable practices. As knowledge and wine quality increased, so did requests of these styles.

Now, it’s increased consumer demand that is encouraging more winegrowers in adapting these farming practices. Is the rise driven by environmental or health consciousness? “Definitely both. What is better for the Mother Earth is better for human beings,” says Schubert.

Wine retailers are experiencing the increased demand of organic wines real-time. In 2012, Flatiron Wines and Spirits opened their first retail shop in New York City. Since the beginning, co-founder Josh Cohen says organic wines have been an important part of their customer’s interest.

“Flatiron has always championed small, family growers, who have led the way to organic farming in many regions. They live among the vines and don’t want to expose their children and families to harsh chemicals. Wines made with the sort of attention to detail organics require are often among the best wines in a region,” Cohen shares. “When customers discover this, there’s no turning back.”

With stores now on the east and west coast, Cohen has seen a steady increase of customers specifically requesting organic wines over the years. He believes the average consumer understands organic to mean the use of less chemical intervention in the winemaking process.

Consumers are choosing organic wines as part of a broader commitment to doing less damage to the earth, winery employees, and their own health.

Wine industry professionals understand organic certification does not guarantee quality or a wine made without manipulation. For Cohen, this knowledge amplifies the importance of the professional interfacing with consumers in guiding them to wines that meets their values and taste.

Recent research backs up these anecdotes. A report by Wine Intelligence indicates organic wine sales are a close second, behind natural wine, in their Global Opportunity Index, and a March 2021 report shows organic wine has a high opportunity for growth as a category among young consumers.

A second report, by Transparency Market Research, notes that “In recent years, there is surge in awareness and popularity among consumers, specifically millennials, about niche product categories including natural and organic food and beverage products.” Their September 2021 also noted: “This factor is expected to boost the demand for products from the organic wine market in the forthcoming years.”

It’s clearly affecting the Loire producers. The Brosseau Family has been producing Muscadet wines at Domaine de la Foliette in Muscadet Sèvre-et-Maine since the 1920’s. In 2000, the winery became Terra Vita Certified (another French sustainable designation, similar to California’s Lodi Rules, Certified Green or Sustainability in Practice Certification). For almost twenty years, this certification was enough to insure wine drinkers of the winery’s commitment to sustainability in viticulture, viniculture, and employee relations.

In 2019, due to pressure from exporters, they began the three-year processes of becoming certified organic. However, Muscadet is a sensitive grape, and strict organic certification poses challenges and raises costs.

“Climate change is affecting every stage of viticulture—early budding, earlier harvest, more disease pressures, different pests. We have to deal with it within the financial means we have,” explains Valentin Denié, domestic sales and export manager of Domaine de la Foliette. “Terra Vitis is more adaptable, organic is one-size-fits-all. If our prices rise, our customer preference for organic may change, then we will change too.”

Chateau de la Soucherie in Anjou has been producing wine since the end of the nineteenth century. After decades of sustainable vineyard practices, in 2019, winery manager Vinney De Tastes implemented a conversion to organic farming. 2022 will be the winery’s first label under the new certification.

Hailing from a Bordeaux winemaking family, De Tastes believes wine is made in the vineyard, and focuses on viticulture. Utilizing bees as a way of ensuring the vineyard is in good health and to increase biodiversity of native flora and beneficial insects, and sheep in the winter to clean under the vines, De Tastes seeks “purity” in the wines, believing this is achieved without the use of pesticides and herbicides.

Domaine Henry Pellé is built on the backs of four generations on the singularity of the Kimmeridgian-centric Morogues Village in Menetou-Salon appellation. Taking over the winery from his father in 2007, Paul-Henry Pellé transformed the vineyard from low-intervention to organic practices. However, he did not begin the formal certification process for labeling until a few years ago, at the request of importers. As of 2021, 25% of his 40 hectares are certified with the rest in process.

Given the effort to convert and expense to organic certification, these Loire vignerons are banking that this isn’t just a fad.

Cohen, of Flatiron Wines, thinks the trend is here to stay. “American wine lovers across the country have taken to organic wines. I’m sure there was a time when New York and San Francisco were outliers in embracing of these wines, but those days are past. We get customers from around the country who come to us for organic wines.”