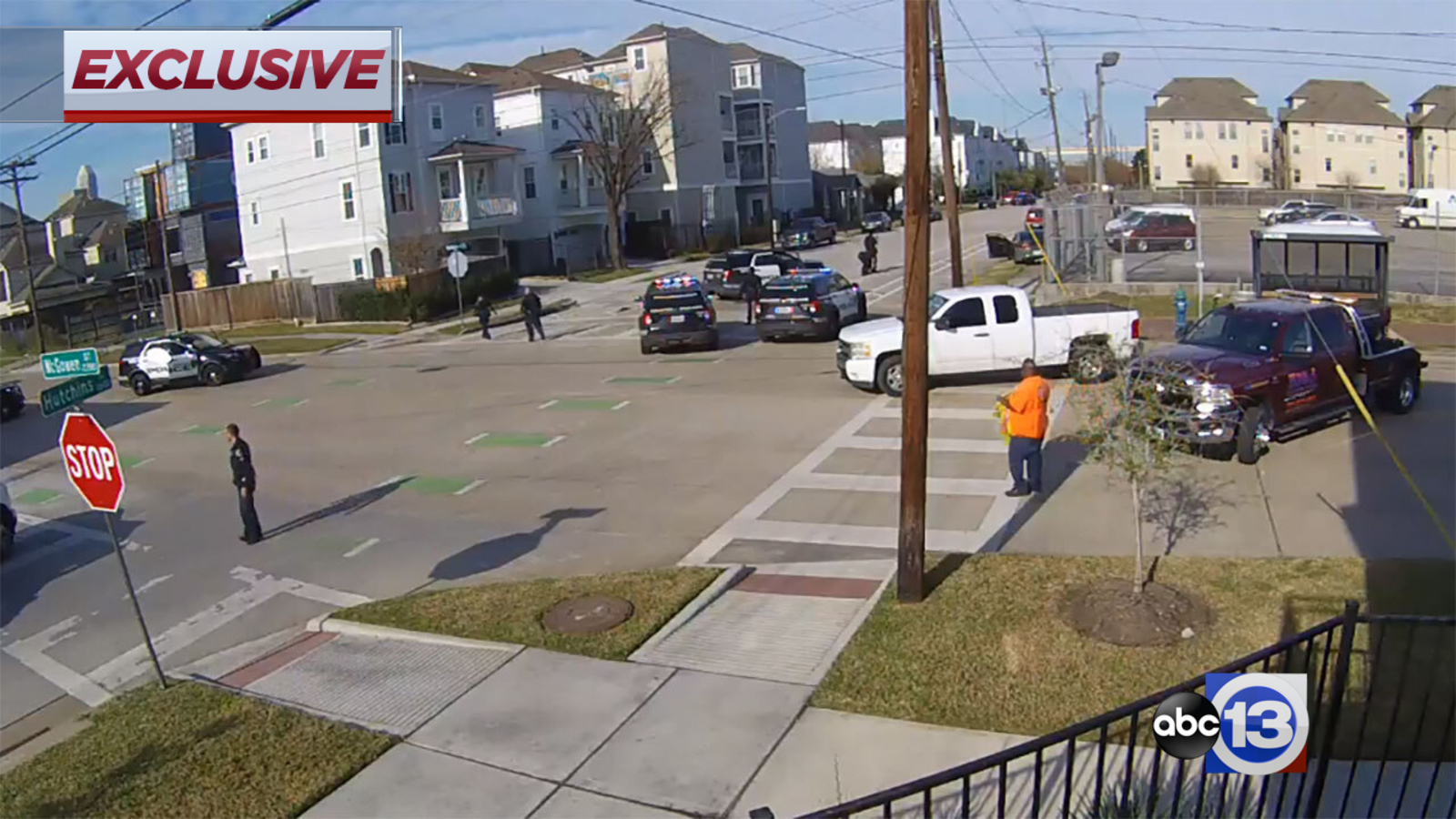 The shooting happened Thursday afternoon in the 2100 block of McGowen Street. Initial reports from police was that officers were responding to a disturbance call at 2:40 p.m. in the 1500 block of Tralle Street when a chase ensued.

Exclusive surveillance video from the scene shows the moment a chase came to an end when the suspect crashed out on McGowen Street. Shots began firing as soon as the officers arrived to the scene.

WATCH: Surveillance video shows the moment gunfire was exchanged between officers and suspect

The officers were taken to Memorial Hermann Hospital in unknown condition.

Meanwhile, there’s additional police activity at a scene on Lockwood at Hirsch, in the Fifth Ward. There’s no official word yet if there’s any connection to the officer shooting.

ABC13 learned from Houston police that the gun used in the shooting may have had a small switch that was added to the suspect’s pistol, making the ordinary Glock handgun which fires one bullet every time the trigger is pulled, into a machine gun.

Riley Hollister, a witness at the scene told ABC13 he heard multiple gunshots, “more than 30 rounds or something. I was over by the park,” he said. “I was doing a little walk, working on my knee and I heard all those gunshots and sirens.”

It’s unclear what led to the shooting at this time. Police are recommending people avoid the area at this time.

3 HPD officers have been shot in the 2100 block of McGowen St.

The suspect fled the scene in a white Mercedes and is being sought at this time. Please avoid the area.

HPD commanders & PIO are en route to Memorial Hermann Hospital where officers are being taken.#hounews pic.twitter.com/I0e2dQD2kB

This story will be updated as more information becomes available.

Like
Comment
Share
Processing
Voice note recorded successfully
Record
Recording 00:00
Commenting has been turned off for this post.
Sponsored
Categories
Read More
US News
Mass. reports 5,007 new COVID-19 cases, 27 new deaths
Coronavirus The state also reported 1,238...
By Patabook News 2021-12-10 22:40:02 0 56
Movies
‘Doctor Strange In The Multiverse Of Madness’ Theatrical Release Blocked In Saudi Arabia
Deadline has confirmed that Disney/Marvel’s upcoming big global blockbuster Doctor...
By Patabook News 2022-04-22 18:45:02 0 23
Technology
Kazakhstan’s deadly protests hit bitcoin, as the world’s second-biggest mining hub shuts down
As the Central Asian nation of Kazakhstan plunged into chaos this week, an internet shutdown...
By Patabook News 2022-01-07 04:40:02 0 39
Technology
API-first cross-collaboration: The secret of any API monetization strategy
We are excited to bring Transform 2022 back in-person July 19 and virtually July 20 –...
By Patabook News 2022-04-24 19:35:02 0 22
Real Estate
Homes are selling faster than ever before, and the spring market is just around the corner
Real estate agents leave a home for sale during a broker open house in San Francisco,...
By Patabook News 2022-02-09 19:30:01 0 24