‘He Stole From Me’: Stormy Daniels Testifies at Avenatti Trial 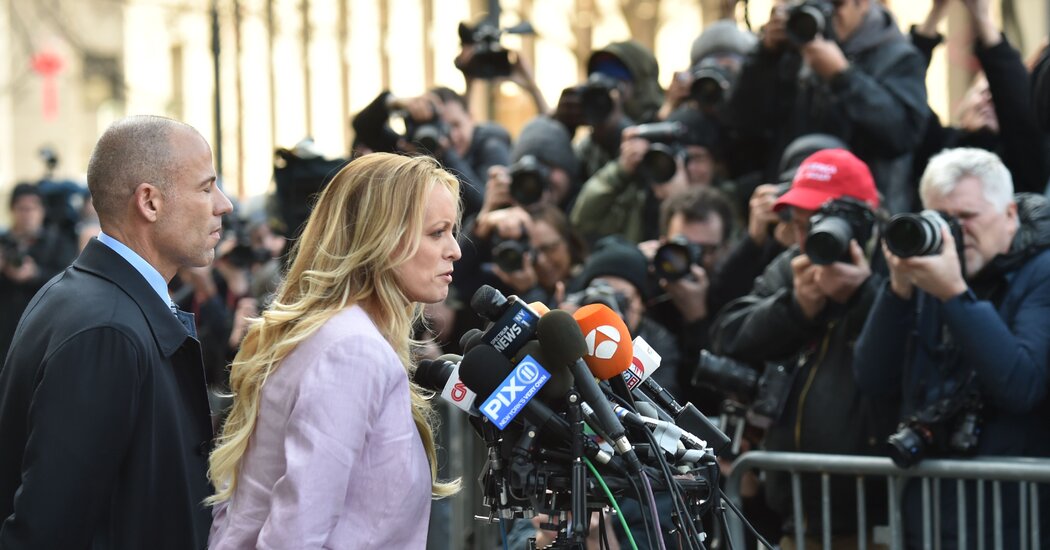 Stormy Daniels, the pornographic film star whose lawsuit against former President Donald J. Trump was at the center of a 2018 scandal, took the stand as a witness on Thursday in the trial of Michael Avenatti, the lawyer who once represented her but now stands accused of stealing from her.

“He stole from me and lied to me,” Ms. Daniels testified in Federal District Court in Manhattan after being called as a government witness shortly after 11 a.m. By day’s end, Ms. Daniels was being cross-examined by the man who once was her fierce advocate: Mr. Avenatti, who is serving as his own lawyer.

The courtroom spectacle was the culmination of the split between Ms. Daniels and Mr. Avenatti, who gained international prominence as an unlikely pair seeking to take down a sitting president, but whose alliance dissolved as accusations against Mr. Avenatti mounted.

Mr. Avenatti said earlier in the day that his cross-examination of Ms. Daniels would take several hours, but in only a few minutes of questioning before Thursday’s court session ended, he asked about her claim that she can see and speak to dead people.

Ms. Daniels acknowledged saying that, explaining that she was part of a project called “Spooky Babes” that she said was about “paranormal activity.” Mr. Avenatti will resume his cross-examination on Friday.

Ms. Daniels, whose legal name is Stephanie Clifford, had long been well-known in the pornography world but became familiar to a much wider audience after suing Mr. Trump, saying that he was using a nondisclosure agreement to try to stop her from talking about a sexual encounter between them that she said had occurred years earlier.

Mr. Avenatti filed that lawsuit in California on behalf of Ms. Daniels, saying the agreement — which had accompanied a payment of $130,000 from Mr. Trump’s lawyer at the time — was void because Mr. Trump had not signed it.

But prosecutors have said that Mr. Avenatti, using a bogus letter purporting to be from Ms. Daniels, tricked her literary agency into sending him about $300,000 of her money. Some of that was spent on office and personal expenses, including hotels, meals and a monthly payment on a Ferrari, according to an indictment.

Prosecutors have also said that Mr. Avenatti was not entitled to any money from Ms. Daniels’s publisher. Mr. Avenatti has suggested that he will make a case that he deserved some of it.

Mr. Avenatti, who was convicted two years ago of trying to extort millions from Nike in a separate criminal case, is charged with wire fraud and aggravated identity theft.

Over the years Ms. Daniels has spoken up from time to time about Mr. Avenatti, but her testimony on Thursday — under oath and in open court — seemed to provide the most complete public record of her recollections of him and of their fallout. It also brought the former allies back together in the same room.

Mr. Avenatti and Ms. Daniels were once stars of what was often called “the resistance” to the Trump presidency, appearing together on “60 Minutes” after the California lawsuit was filed to accuse Mr. Trump of heavy-handed and intimidating tactics.

Wearing a black dress and a dark red coat, Ms. Daniels testified on Thursday in a clear voice. Mr. Avenatti appeared to rarely glance in her direction, instead looking down as he took extensive notes.

Ms. Daniels began her testimony by describing how she first met Mr. Avenatti in early 2018 at the Waldorf Astoria in Beverly Hills, Calif. She said that after telling Mr. Avenatti about the nondisclosure agreement and her history with Mr. Trump, she also made it clear that did not have a lot of money for a retainer or deposit.

Numerous inquiries. Since former President Donald Trump left office, there have been many investigations and inquiries into his businesses and personal affairs. Here’s a list of those ongoing:

Investigation into tax evasion. As part of their investigation, in July 2021, the Manhattan district attorney’s office charged the Trump Organization and its chief financial officer with orchestrating a 15-year scheme to evade taxes. A trial in that case is scheduled for summer 2022.

At their next meeting at a restaurant in Los Angeles, Ms. Daniels testified, Mr. Avenatti said that he would represent her for a payment of $100. He added that he would set up a legal-defense fund to raise more money, she said, and take a share of any money awarded as a result of the lawsuit against Mr. Trump.

“When it came to a book deal or a movie or a documentary, we would discuss it later,” Ms. Daniels testified. She said that she paid Mr. Avenatti $100 in cash. He used that money to pay for lunch, she added.

The bulk of Ms. Daniels’s testimony described text messages she had exchanged with Mr. Avenatti over a period of several months in 2018 and 2019. Those messages were displayed on screens inside the courtroom, showing that Ms. Daniels had asked again and again about money that she believed that St. Martin’s owed to her.

Mr. Avenatti responded in a variety of ways while agreeing to help obtain the payments, sometimes accusing the publisher of being difficult and at one point saying he was “threatening litigation.”

“I trusted him to handle it,” Ms. Daniels testified when asked by a prosecutor why she had sought Mr. Avenatti’s help. “Because he was my lawyer.”

In February 2019, Ms. Daniels sent messages to people at St. Martin’s asking about what she believed was missing money, she said. By that time, she added, she had begun to suspect that Mr. Avenatti had been misleading her.

“Someone was being dishonest,” she testified. “And I wanted to find out who.”

Soon, Ms. Daniels said, she received evidence from someone at her literary agency that money from St. Martin’s had been sent to an account controlled by Mr. Avenatti. When she confronted him, he replied, “Let me find out if we even received this payment,” the text exchanges showed.

But by that time Ms. Daniels had all the proof she needed.

“I knew that he had been lying,” she testified, adding: “He lied to me almost every day for five months.”

The post ‘He Stole From Me’: Stormy Daniels Testifies at Avenatti Trial appeared first on Patabook News .