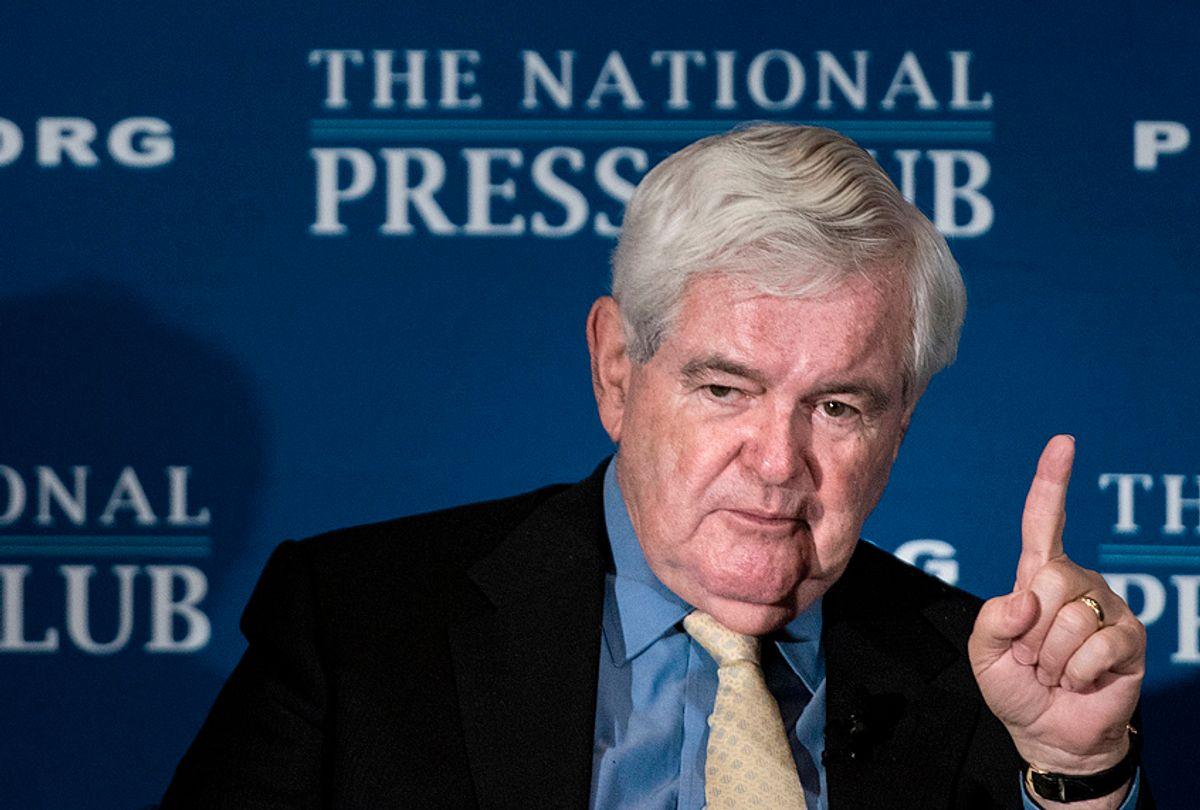 Newt Gingrich, a former House speaker and candidate for the Republican presidential nomination, stoked outrage on Sunday by predicting members of the House committee investigating the Capitol attack will be imprisoned if Republicans retake the chamber this year.

One of two Republicans on the committee, Liz Cheney, said: “A former speaker of the House is threatening jail time for members of Congress who are investigating the violent attack on our Capitol and our constitution. This is what it looks like when the rule of law unravels.”

Gingrich made his name with scorched-earth opposition to Bill Clinton in the 1990s and ran for the Republican presidential nomination in 2012. He is now, among other pursuits, a prominent Trump supporter and rightwing gadfly.

He made his prediction on Fox News, for which he is a contributor.

Calling the members of the 6 January committee “wolves [who] are going to find out that they’re now sheep”, he said that if Republicans take Congress in November, “this is all going to come crashing down … they’re the ones who in fact, I think, face a real risk of jail for the kinds of laws they’re breaking”.

The 6 January committee has recommended criminal charges for the former White House adviser Steve Bannon and Mark Meadows, Trump’s final chief of staff. Both refused to comply with subpoenas.

Bannon has pleaded not guilty to contempt of Congress, a charge that carries a year in jail, with a trial set for the summer. The Department of Justice has not acted regarding Meadows.

Gingrich said: “You have, both with Attorney General [Merrick] Garland and this select committee on 6 January, people who have run amok … they’re running over people’s civil liberties.

Gingrich also said the committee was “basically a lynch mob”.

Another member of the committee, the Democrat Zoe Lofgren, told CNN Gingrich’s comments were “just bizarre. I think Newt has really lost it. You know, it leaves me speechless.”

Alluding to Trump’s attempt to overturn his defeat in part through the Capitol putsch, Lofgren added: “I mean, unless he is assuming that the government does get overthrown and there’s no system of justice.”

Most observers expect Republicans to at least retake the House in November and to turn their sights on Democrats, who impeached Trump twice, and Joe Biden.

But some see a legal net closing on Trump himself. Last week it emerged that the 6 January committee has requested interviews with figures including Ivanka Trump, a move that prompted the former president to complain about “vicious people” who “go after children”.

Ivanka Trump is 40. Furthermore, Donald Trump’s niece was among observers to point out that Trump himself has no problem going after other people’s children.

Speaking to MSNBC, Mary Trump accused her uncle of “enormous hypocrisy”, for going after Hunter Biden, the president’s son, “who last I checked never worked for the federal government, so his double standard is grotesque on its face”.

Mary Trump also had a warning for her cousin, saying Trump “will throw anybody under the bus if he believes it’s in his best interest to do so”.

Barr stoked criticism by overseeing investigation of Trump’s claims of electoral fraud in his defeat by Biden but infuriated the president when he said no evidence was found. He resigned before 6 January.

Cheney and Adam Kinzinger of Illinois defied Republican leadership to join the select committee. Kinzinger will retire at the midterms. Cheney faces a Trump-endorsed challenger.

Other senior Republicans, including Trump allies Jim Jordan and Scott Perry and the minority leader, Kevin McCarthy, have refused requests to co-operate with the House committee.

Like
Comment
Share
Processing
Voice note recorded successfully
Record
Recording 00:00
Commenting has been turned off for this post.
Sponsored
Categories
Read More
Homes
Home Remodeling Tips & Ideas on a Budget! (with Before & After)
We recently did a little home remodeling and I wanted to share our tips and ideas to remodel on...
By Patabook News 2021-06-11 11:05:01 0 126
US News
Omicron Helps Fuel a Case Increase in the U.S.
Though the situation was varied around the country, the overall picture is growing worse by the...
By Patabook News 2021-12-21 18:40:02 0 66
Fashion
How Many Calories Should You Eat For Dinner? We Asked a Dietitian
Whether you’re trying to lose weight or simply adopt a healthier lifestyle, being mindful...
By Patabook News 2021-09-01 08:55:02 0 190
Homes
DIY Decor CRAFTS you can easily make at your home || cement, clay, wood, metal crafts
Our Social Media: 5-Minute Crafts: https://www.goo.gl/8JVmuC Facebook:...
By Patabook News 2021-07-22 10:20:01 0 139
Fashion
Lizzo Jokes About Chris Evans Pregnancy Rumors As Saturday Night Live Host
This weekend, Lizzo made her debut as a host on Saturday Night Live and a return performance as...
By Patabook News 2022-04-17 23:40:02 0 26