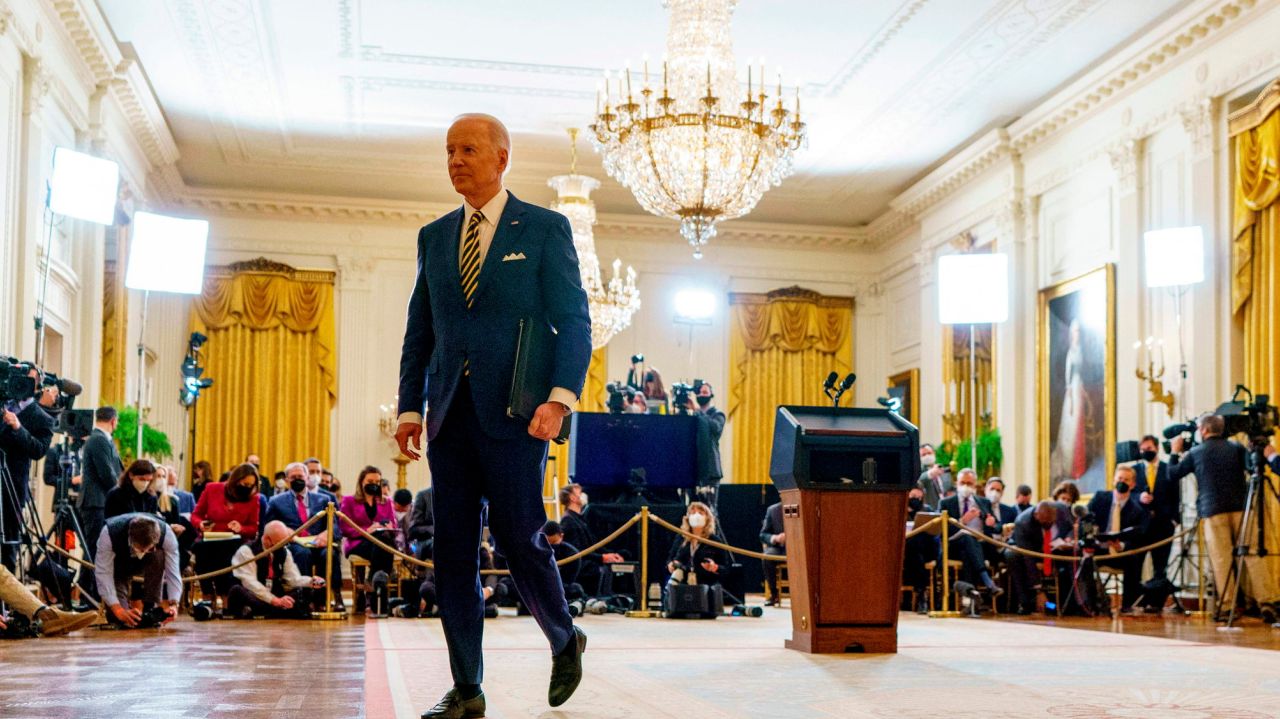 WASHINGTON — President Joe Biden, entering his second year in the Oval Office, and facing a midterm election that could switch control of Congress back to Republicans, indicated this week he plans to retool his approach so that more of his legislative priorities, including funding universal prekindergarten and clean energy programs, fare a better chance of passing.

After a first year in office spent shepherding sweeping packages through Congress — including a $1.9 trillion coronavirus relief package and a $1.2 trillion bipartisan infrastructure bill — Biden in a rare White House press briefing last week conceded that his administration will need to pare a proposed $2.2 trillion social infrastructure bill if he hopes to win the support of Sen. Joe Manchin (D-W.Va.), a moderate Democrat from a red state whose sole opposition to the bill has been enough to derail it from moving forward in the evenly-divided Senate.

“I think we can break the package up, get as much as we can now, and come back and fight for the rest later,” Biden said.

The president also had hoped to pass a pair of bills addressing voting rights and policing reform before hitting his anniversary mark on Jan. 20, but ultimately fell short. As part of his second year reset, the president and White House officials have signaled he will look to narrow the scope of his proposals or take executive action to revive those legislative priorities.

“I’ve been engaged a long time in public policy, and I don’t know many things that have been done in one fell swoop,” Biden said when asked if he was confident he could pass more items off his agenda before November’s election.

Biden’s second year recalibration is typical of most presidencies, said Meena Bose, director of Hofstra University’s Kalikow Center for the Study of the American Presidency

“We know that the president enters office with a more ambitious agenda than will be enacted,” Bose said in an interview with Newsday. “Presidents may come in with strong political support, public support and support in Congress, but that doesn’t necessarily translate into legislation … every president has a much larger agenda than can realistically be achieved.”

Get the latest breaking news as it happens.

To salvage the remainder of his agenda, Biden has signaled he’ll focus on the following actions in the coming weeks:

Scaling back his social infrastructure plan

Biden’s acknowledgment that he “we’re going to have to probably break” up his social infrastructure package to pass in the Senate, has sent congressional Democrats scrambling to redraw a proposal that can pass in time for the midterm elections.

“What the president calls ‘chunks,’ I would hope, would be a major bill going forward. It may be more limited, but it is still significant,” said House Speaker Nancy Pelosi.

Biden laid out which components of the $2.2 trillion Build Back Better Act he believed would receive Manchin’s support and ultimately pass via the Senate’s budget reconciliation process, saying “it’s clear that we would be able to get support for” a $500 billion proposal to invest in clean energy and address climate change, and there is “strong support” in providing free prekindergarten for the nation’s three and four-year-olds.

Not likely to make the cut in a revised spending plan is an expansion of the child tax credit that saw the majority of American families receive an increased credit of up to $1,600 per child and a plan to make community college tuition free for two years, Biden said. Manchin has previously voiced his opposition to the proposals.

“They are massive things that I’ve run on, I care a great deal about, and I’m going to keep coming back at,” Biden said.

As the country grapples with increasing prices, Biden has argued his infrastructure agenda will “ease long-term inflationary pressure,” by promoting policies aimed at “getting more people into the workforce.”

In the past two weeks, Biden ramped up his appeals for lawmakers to pass a proposed voting rights bill that aimed to establish national standards around early voting, voting by mail and access to voting. But the effort was unsuccessful.

Senate Republicans solidly voted down the proposal on Wednesday, and two key Senate Democrats — Manchin and Sen. Kyrsten Sinema of Arizona — objected to lifting the chamber’s 60-vote threshold that would have allowed Democrats to pass the bill with a simple majority.

Collins’ push to overhaul the 1887 Electoral Count Act comes in response to last year’s effort by supporters of President Donald Trump to invalidate the Electoral College count. Collins, a moderate Republican, told reporters on Thursday she is looking to narrowly focus the reforms on restoring “confidence in our election,” foregoing the sweeping changes Biden and election rights activists have sought such as making Election Day a federal holiday to boost voter participation.

Biden, asked on Wednesday about the likelihood of his voting rights agenda passing, said that “rather than judge what’s going to get done and not get done, all I can say is I’m going to continue to make the case why it’s so important to not turn the electoral process over to political persons who are set up deliberately to change the outcome of elections.”

With Democrats holding onto a narrow majority in Congress, Biden vowed to hit the campaign trail and be “deeply involved” in the midterm elections.

“I’m going to be out on the road a lot, making the case around the country, with my colleagues who are up for reelection and others, making the case of what we did do, and what we want to do,” Biden said.

To regain control of the U.S. House, Republicans only need to gain five seats, and in the evenly-divided Senate, Republicans just need to flip one Democratic seat.

Biden’s push to preserve the Democratic majority comes against a series of political headwinds, including unfavorable poll numbers and Republican victories during last year’s state and local elections, pointing to the GOP regaining ground among suburban swing voters that carried Biden to victory in 2020.

“If the President wants Democrats to do well in ‘22, and he wants Democrats to retain the White House in ‘24 then he needs to take a page from Bill Clinton after 1994 and during 1996,” said presidential historian Jeffrey Engel. “Focus on a lot of small achievable wins so that the public perceives progress, and the public perceives it as an administration that gets things done.”

Engel, director of the Center for Presidential History at Southern Methodist University in Dallas, said pushing for smaller wins, however, may be at odds with the “generational” changes that Biden has called for in his social infrastructure plan.

“Biden, I think, is going to have to ask a fundamental question — is he is willing to sacrifice his party in ‘22 and perhaps the White House in ‘24 to get the kind of tectonic structural change that I think he actually would like?” Engel said.