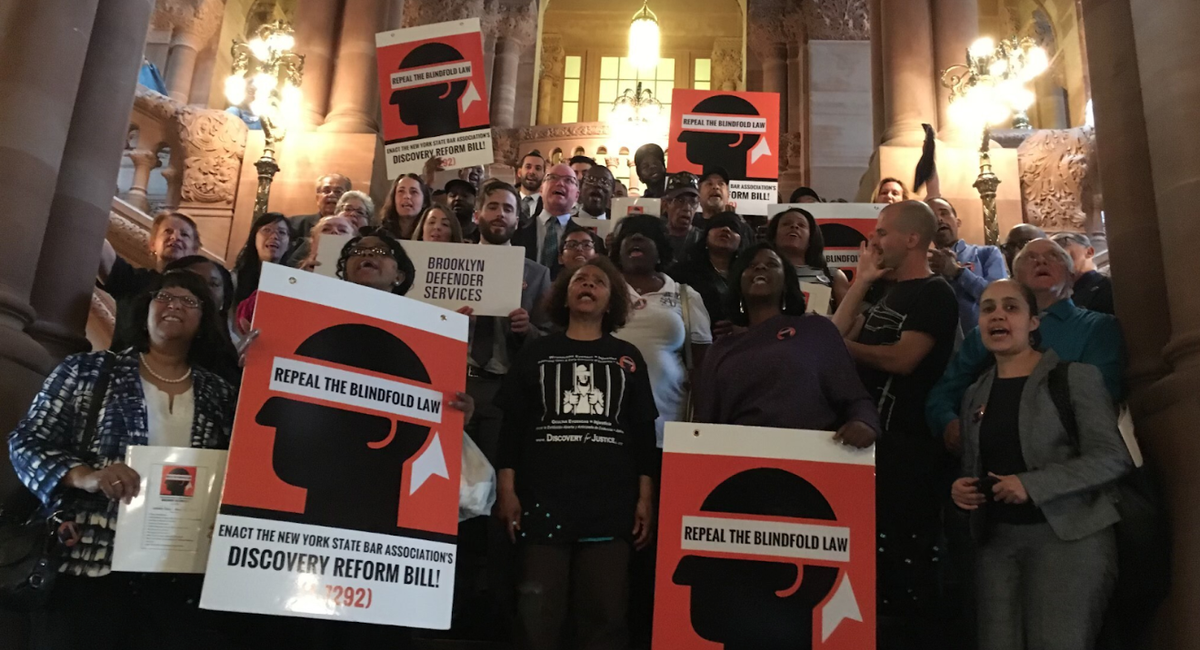 Several current and former elected officials who passed sweeping reforms governing how prosecutors share evidence with people accused of crimes said a new program, imposed by a Brooklyn judge on Monday, is undermining legal protections they sought to enshrine in state law in 2019.

On Tuesday, WNYC/Gothamist broke news of Judge Keisha Espinal’s court order, which seeks to speed up cases by discouraging defense attorneys from filing last minute motions requesting that cases be dismissed because of evidence that prosecutors have failed to turn over. But lawmakers, along with defense attorneys, argue that Espinal’s order could unfairly deprive defendants of the right to challenge missing evidence and that it could incentivize prosecutors to withhold critical information until the eve of trial.

Until its repeal two years ago, New York’s previous statute on evidence sharing, nicknamed the “blindfold law,” was one of the most restrictive in the country. Criminal justice advocates said it forced many defendants into taking plea deals, even when they argued they were innocent.

The 2019 changes required prosecutors to turn over evidence early on in a case, and created penalties for those who did not meet disclosure deadlines. Defenders argue withholding evidence was common practice before the reforms.

“Understanding that keeping defendants and their attorneys in the dark increased the chance of wrongful conviction, we passed open discovery that brought us in line with 46 other states,” said Dan Quart, a state assemblymember from Manhattan who co-sponsored the 2019 legislation. “Any effort to undermine or subvert open discovery contradicts the legislature’s intent and the very spirit of the law.”

“The law is very explicit,” said Joseph Lentol, a former Brooklyn assemblyman who crafted and fought for the legislation for years. “That’s what needs to be followed, not the dictates of a human being so that the intent of discovery could be thwarted.”

Senator Jamaal Bailey, the Bronx and Westchester lawmaker who sponsored the senate version of the bill, issued a more tepid criticism of Judge Espinal’s order.

“I have read the proposed order that is being rolled out in Brooklyn and find some of the language contained in the order troubling,” he said. “I look forward to working with all stakeholders to ensure that our discovery reforms are being properly implemented, not just in Brooklyn, but all across the state.”

Espinal, the supervising judge of Brooklyn’s criminal court, did not respond to requests for comment submitted to her court attorney. But in a statement, Lucian Chalfen, a spokesperson for the Office of Court Administration, mocked elected officials for attempting to weigh in on legal issues.

“If all the self-appointed judicial scholars and armchair judges sought to come to Brooklyn Criminal Court and see Judge Espinal’s innovative initiative in action before declaring it improper and subject to reversal, then they would be a part of our continuing efforts for normalization of court operations and eradication of case backlogs, not an impediment,” he said.

Some current and former prosecutors told WNYC/Gothamist that the order is a necessary push to get defense attorneys to be more upfront about evidence they feel is missing, so that district attorney’s offices can make a good faith effort to retrieve any outstanding records, some of which are not always immediately in their possession. They argue that the courts do have the legal authority to roll out at least parts of this order, pointing to certain clauses in New York’s discovery and judiciary laws that allow courts to mandate discovery conferences between prosecutors and defense attorneys and devise new processes to facilitate legal proceedings.

But several public defender organizations, which played a major role in campaigning for the changes to discovery, argue the mandate violates state law.

“Ultimately, this order subverts the spirit of discovery reform, which removed the blindfold that had long kept people in the dark concerning the evidence in their criminal cases,” said Yung-Mi Lee, Legal Director of Brooklyn Defender Services’ Criminal Defense Practice.

And some are hinting that they may ask higher courts to challenge the program before it spreads to other parts of the city.

“We will monitor this mandate and will litigate should the consequence of this proposal harm our clients or place burdens on defense counsel that are contrary to the law,” said Dawn Ryan, Attorney-In-Charge of the Brooklyn Trial Office at the Legal Aid Society.

The Office of Court Administration says it currently has “no plans to change” the intent of the program, but noted that the order will undergo “minor modifications” to amend the process it initially laid out.

George Joseph is an investigative reporter with WNYC/Gothamist’s Public Safety Unit. You can send him tips on Facebook, Twitter @georgejoseph94, Instagram@georgejoseph81, and at gjosephwnyc@protonmail.com. His phone and encrypted Signal app number is 929-486-4865

Like
Comment
Share
Processing
Voice note recorded successfully
Record
Recording 00:00
Commenting has been turned off for this post.
Categories
Read More
US News
Charlamagne Tha God exchange was result of ‘frustration’
Vice President Kamala Harris has said she felt “frustration” during a rocky interview earlier...
By Patabook News 2021-12-27 20:40:01 0 41
US News
Can anyone in California now get a COVID vaccine booster?
California is letting its residents decide their own COVID-19 risk when determining whether...
By Patabook News 2021-11-12 23:40:02 0 29
Fashion
10 Mental Health Podcasts That Will Help You Feel Seen (and Teach You Something, Too)
Have you ever been in the midst of an anxiety spiral, and someone just hugs you or holds your...
By Patabook News 2021-09-22 07:00:02 0 42
US News
Giants special teams coordinator Thomas McGaughey believes progress is being made
Thomas McGaughey has been around the Giants long enough to remember the chants. He even mimicked...
By Patabook News 2022-01-06 21:45:02 0 16
Sports
Nuggets expect Porter, maybe Barton for Game 2
9:53 PM ET Tim BontempsESPN Denver Nuggets coach Michael Malone said Tuesday that forward...
By Patabook News 2021-06-09 05:10:01 0 94