Inside the Beltway: Herschel Walker: America’s ‘worth fighting for’ 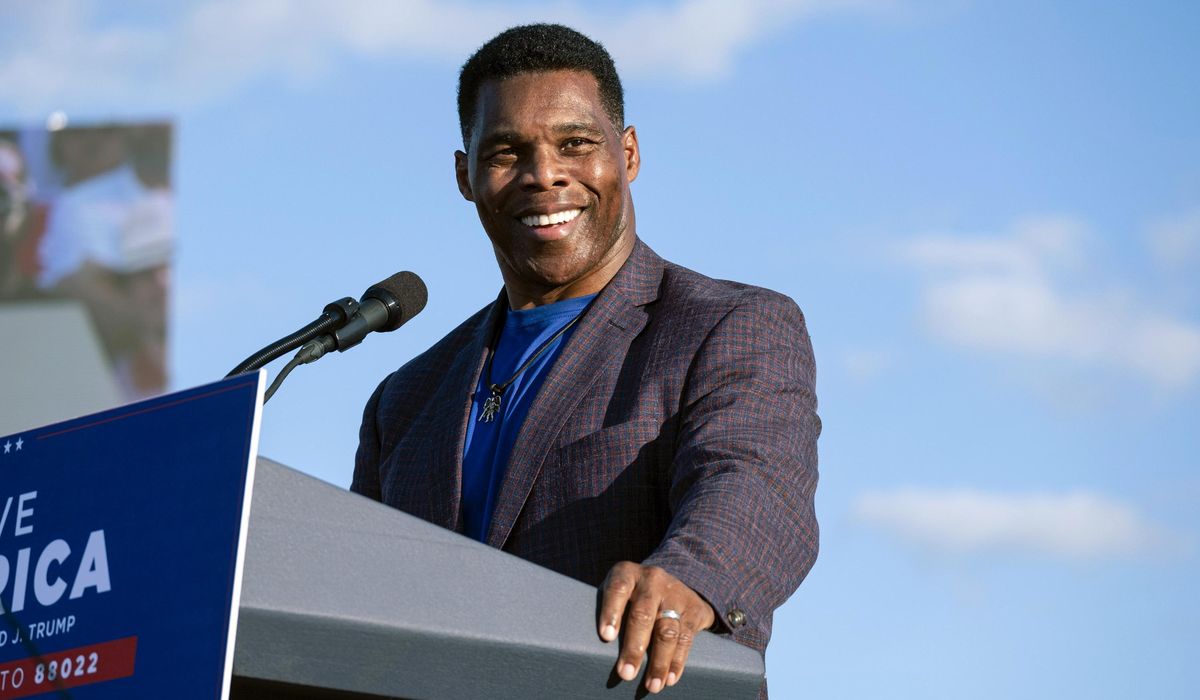 Football great Herschel Walker declared his intent to run for the U.S. Senate seat in Georgia on Aug. 24 and now reveals he has organized 34N22 — a political action committee now up and running to support the conservative Republican.

“The group will highlight the strong record and unparalleled work ethic of Herschel Walker as a successful businessman, community leader, and Heisman-winning football player at the University of Georgia. 34N22 will also work aggressively to hold far-left incumbent Raphael Warnock accountable for his failed policies and divisive rhetoric that have hurt Georgia families,” noted a mission statement released Tuesday.

Mr. Walker is clear in his intent.

“The politicians pit Americans against Americas, the rich versus poor, urban versus rural — I don’t believe in that garbage. It’s a lie. I’m a conservative not because someone told me to be one. I’m a conservative because I believe in smaller government, a strong military personal responsibility and making sure all people have the opportunity to pursue their dreams. That’s an America worth fighting for,” the candidate says in a new campaign spot.

He has the endorsements of Senate Republican Leader Mitch McConnell and former President Donald Trump.

“Herschel is the only one who can unite the party, defeat Senator Warnock, and help us take back the Senate,” Mr. McConnell said upon revealing his endorsement on Oct. 27. Find the campaign at Www.34n22.com/

During a press conference Monday, White House press secretary Jen Psaki was asked about the status of any upcoming Christmas parties at 1600 Pennsylvania  Ave. NW in the nation’s capital. Would there be any restrictions on the size of the gathering, given the emergence of the omicron variety of COVID-19?

“There will be more details on holiday parties. But there are not, as you know, restrictions that have been announced to date by our health and medical experts. So that hasn’t impacted or changed our approach,” Ms. Psaki advised.

DECK THE HALLS WITH INFLATION

So the price of fresh Christmas trees is expected to rise up to 30% more for reasons which are now very familiar to U.S. consumers — supply chain issues and slim inventories. There are fewer live trees. Following the 2009 recession, Christmas tree growers have been planting fewer trees due to financial challenges — which means fewer mature trees, according to a report from Newsday.

And there’s less to choose from. Some retailers now have about 43% of the usual inventory, according to the American Christmas Tree Association, an industry group.

“Even Christmas trees aren’t safe from the inflation crisis caused by Democrats’ reckless spending and inability to manage the supply chain,” observes Mike Berg, spokesman for the association.

If you do not know much about Rep. Alexandria Ocasio-Cortez, you soon will. A hefty book about the New York Democrat is on the way, titled “Take Up Space: The Unprecedented AOC.”

It’s a project that will take up some space, indeed. The 400-page book itself is comprised of essays and stories by New York magazine writers and commentators, including Rebecca Traister, Lisa Miller, Tim Shenk, David Wallace-Wells and Molly Fischer.

They will explore the lawmaker’s “rare authenticity,” her place in history and “the role that her beauty plays in her public perception” according to advance notes from publisher Simon & Schuster. The book will also highlight how the teenagers of today see her as “the politician of their futures,” among many other things.

“Sworn in at 29 years old in 2018, Alexandria Ocasio-Cortez was the youngest member of the 118th Congress, and the youngest woman to serve in United States history. She is one of the most prominent politicians on social media, with millions of followers on Twitter, Instagram, and Facebook, making headlines consistently when she utilizes each platform to communicate her opinions, ideas, and progressive policies,” the publisher says.

First, there was intriguing chatter that Vice President Kamala Harris and Secretary of Transportation Pete Buttigieg did not get along very well. Then there was more chatter that the two might be paired up as running mates in the 2024 presidential election, as reported right here in the Beltway. What’s next?

How about an appearance together? Well, here it comes.

“On Thursday, Vice President Harris will travel to Charlotte, North Carolina, to discuss how the Bipartisan Infrastructure Law will upgrade our nation’s infrastructure and create good-paying union jobs in North Carolina. She will be accompanied by Secretary of Transportation Pete Buttigieg and Rep. Alma Adams,” the White House advised on Monday.

“The travel pairing could serve to douse the impression of a growing rift among the Democrats, but it also risks worsening the simmering discord between their camps, especially if the politicians fail to put on a convincing show of unity,” countered the New York Post on Tuesday.

The post Inside the Beltway: Herschel Walker: America’s ‘worth fighting for’ appeared first on Patabook News .

Like
Comment
Share
Processing
Voice note recorded successfully
Record
Recording 00:00
Commenting has been turned off for this post.
Categories
Read More
Women
This Winter, Hit the Slopes in a Seriously Chic Ski Outfit
As POPSUGAR editors, we independently select and write about stuff we love and think...
By Patabook News 2022-01-27 06:55:01 0 7
US News
101-Year-Old Pearl Harbor Vet Returns To Remember Those Lost
HONOLULU (AP) — When Japanese bombs began falling on Pearl Harbor, U.S. Navy Seaman 1st Class...
By Patabook News 2021-12-06 18:40:01 0 35
US News
Governor Newsom Highlights Clean California Program On Wednesday – CBS Los Angeles
LOS ANGELES (AP) — Gov. Gavin Newsom picked up litter and painted over graffiti in Los Angeles...
By Patabook News 2021-12-16 12:40:01 0 31
US News
Ohio governor signs new congressional district map into law
Republican Ohio Gov. Mike DeWine has signed a new map of congressional districts into law...
By Patabook News 2021-11-21 01:40:02 0 50
World News
Why It’s Important For Vaginal Health to Wipe From Front to Back When Using the Bathroom
If you have a vagina, you may have heard that wiping from front-to-back is the best technique...
By Patabook News 2021-05-29 02:50:01 0 145