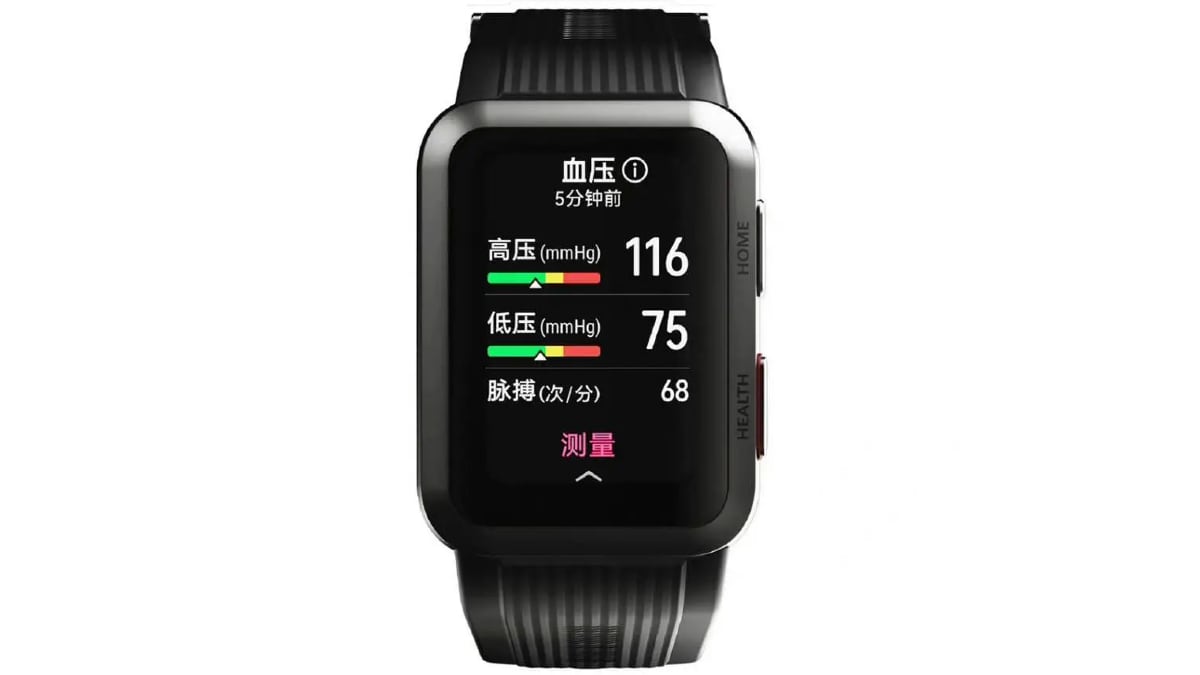 Huawei recently launched the Huawei Watch GT Runner with a 14-day battery life and 100 sports modes. The Chinese tech giant is now reportedly gearing up to launch a new smart wearable with even more advanced features. Dubbed as Huawei Watch D, the latest device is said to be Huawei’s first smartwatch that can be used to measure blood pressure directly on the wrist. Ahead of the official announcement, renders of the smartwatch have leaked online, offering a glimpse into its possible design. Huawei Watch D is said to launch next month in the Chinese market.

A tipster has shared the promo images of the Huawei Watch D on the Chinese microblogging website Weibo. The images shared show little resemblance to previous Huawei wearables. The Huawei Watch D can be seen sporting a rectangular design display with two buttons on the right-hand side. The buttons can reportedly be used for accessing Health and Home options. According to the tipster, Huawei’s first smartphone with blood pressure monitoring feature can meet the standards of medical devices. The Huawei Watch D is also said to have a high accuracy rate. According to the tipster, the device has already obtained the State Drug Administration Class II medical device registration certificate.

Huawei introduced the Huawei Watch GT Runner last week with a price tag of CNY 2,188 (roughly Rs. 25,500). It runs on HarmonyOS and sports a circular 1.43-inch (466×466 pixels) AMOLED touch display with a 46mm dial. Features of the wearable include TruSeen 5.0+ heart rate monitoring, blood oxygen saturation (SpO2) monitoring, sleep, and stress monitoring. Huawei Watch GT Runner offers more than 100 sports modes and has Bluetooth v5.2 connectivity along with 2.4GHz band Wi-Fi and NFC. It features an IP68 rating as well. The smartwatch packs a 451mAh battery that can last for up to 14 days with typical usage and 7 days with heavy usage.

Is OnePlus 9R old wine in a new bottle — or something more? We discussed this on Orbital, the Gadgets 360 podcast. Later (starting at 23:00), we talk about the new OnePlus Watch. Orbital is available on Apple Podcasts, Google Podcasts, Spotify, and wherever you get your podcasts.

Like
Comment
Share
Processing
Voice note recorded successfully
Record
Recording 00:00
Commenting has been turned off for this post.
Sponsored
Categories
Read More
US News
The 27 best work from home essentials for 2021
CNN —   CNN Underscored is constantly testing products — be it...
By Patabook News 2021-10-17 14:40:02 0 135
US News
UK issues sanctions against Belarus – POLITICO
LONDON — The U.K. has announced a first tranche of sanctions against Belarus over its support...
By Patabook News 2022-03-01 20:55:02 0 46
World News
Australian Open 2021: 'No special treatment' for tennis players in Melbourne
Tennis players living under strict quarantine rules before the Australian Open will get "no...
By Patabook News 2021-01-18 12:15:02 0 108
Sports
College football transfer portal: Who added and lost the most value?
7:00 AM ET Anthony Treash One year ago, the NCAA made the ground-breaking decision to allow...
By Patabook News 2022-05-13 17:50:02 0 22
US News
Tunable Laser Market Overview, Business Opportunities future, growth 2027
Market Analysis Market Research Future (MRFR) presumes the global tunable laser market size to...
By Soham Patel 2022-03-29 09:06:34 0 38