Does our Solar System have a wall?

Marking the boundary of our Solar System and interstellar space, this ‘wall’ provides important protection for the Earth.

Does our Solar System have a wall? The answer is, yes and no. True, scientists sometimes describe the rise in temperature at the Solar System’s ‘heliopause’ as a wall. This is the region of space where the ‘solar wind’ – the constant stream of mostly protons, electrons, and alpha particles emitted by the Sun – is no longer strong enough to push back the ‘wind’ of particles coming from distant stars. Here, the hot, tenuous solar wind plasma (ionised gas) gives way to the colder, denser ‘interstellar medium’ (ISM).

The heliopause marks the boundary between the Solar System and interstellar space – it is the edge of the ‘heliosphere’, the bubble of space in which the Sun’s magnetic field and particle emissions dominate.

How large is this important boundary? Consider that one astronomical unit, AU, is defined as the average distance between the Earth and the Sun. The heliosphere lies at about 120AUs from the Sun in the direction facing the interstellar wind – and in the opposite direction it extends to at least 350AU. 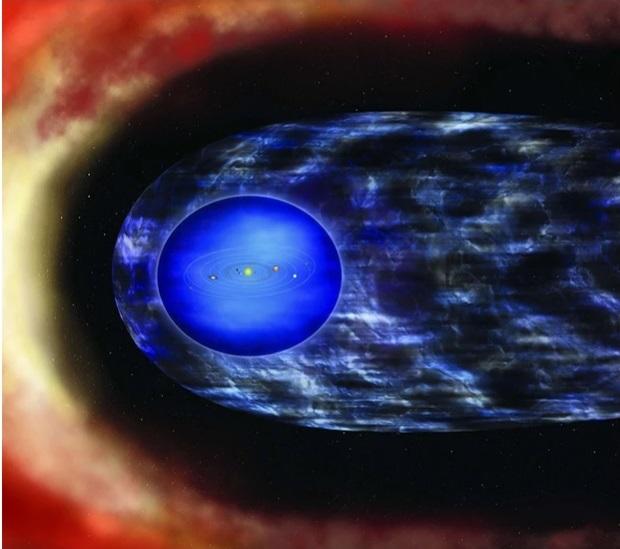 By deflecting 70 per cent of energetic ‘cosmic rays’, the Sun’s heliosphere is crucial in protecting the Earth (and hence humans) from harmful interstellar radiation.

Launched in 1977, initially bound for Jupiter and Saturn, NASA’s Voyager 1 and Voyager 2 spacecraft appear to have crossed the Sun’s heliopause on 25 August 2012 and 5 November 2018, respectively. Instruments onboard Voyager 2 discovered that as plasma at the heliopause slows down, it becomes denser and the local magnetic field increases.

Just beyond the heliopause, the temperature of the ISM is a staggering 29,700–50,000°C. This region has somewhat sensationally been dubbed the ‘wall of fire’. This is misleading because, although it is incredibly hot, the plasma here is extremely diffuse; meaning the Voyager probes (or anything else for that matter) can easily pass through the heliopause completely unharmed.