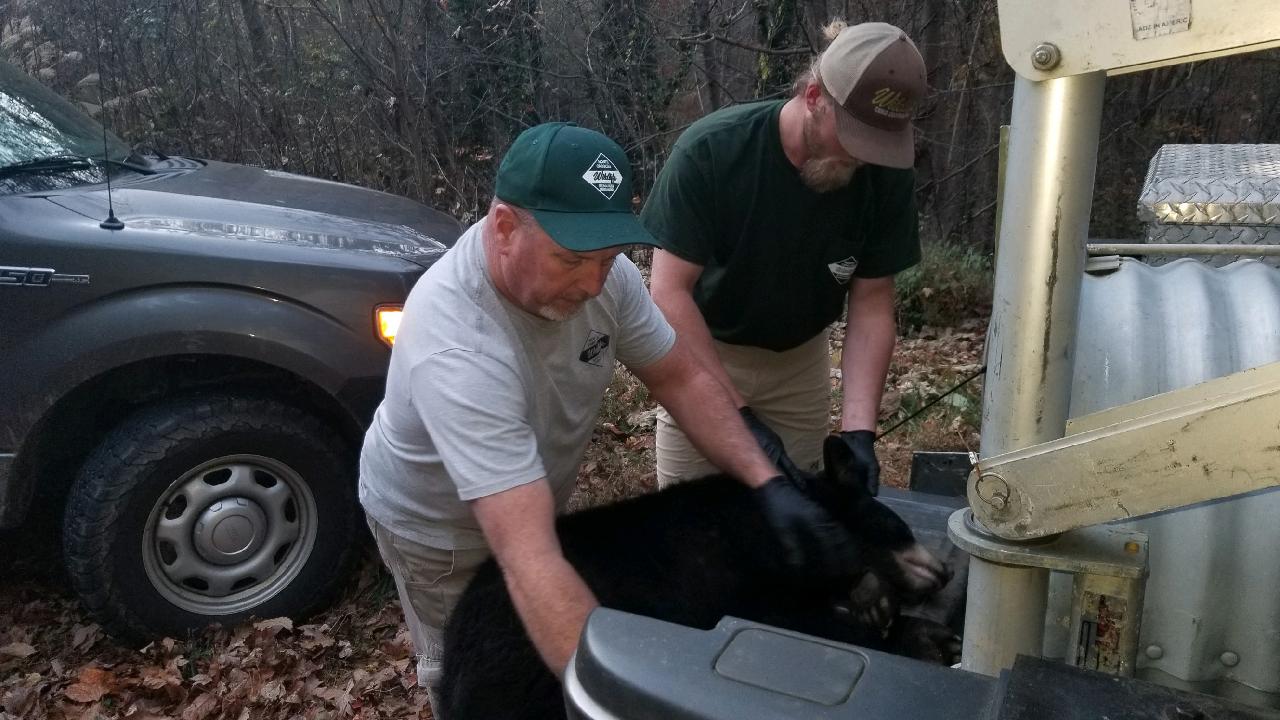 A bear cub was rescued and brought back to the wilderness after residents in an Asheville, North Carolina neighborhood saw her roaming around with a cheesy puff container stuck on her head. Wildlife biologists praised the community for rallying together and assisting with rescue efforts, while others said she was rescued via drone footage.

Wildlife biologists at the North Carolina Wildlife Resources Commission (NCWRC) said they spent two days attempting to locate the bear cub after receiving reports of her walking around Monday evening with a plastic container on her head.

“Thanks to direct calls to our biologists and messages in response to our agency’s NextDoor post, Asheville residents led us directly to the cub,” McVey said in a statement on Facebook. “We were able to safely dart and anesthetize the bear, remove the jug from her head and perform a health check. She was in great health, with no injuries or lacerations, and immediately relocated to a remote area in western North Carolina.”

McVey said the cub probably got the plastic container stuck on her head while she was rummaging through trash. He said she was “feisty and ready to go” which they said was a great sign.

He said that although their staff is trained for these types of situations, the public’s help allowed them to respond quickly.

But in the comments of the NCWRC’s official statement, many mentioned that Help Asheville Bears (HAB), a privately funded non-profit that works to protect bears from illegal poaching, assisted with the rescue by notifying them about the location of the bear after receiving a tip from a drone operator.

In a statement from HAB, they claimed the official post from the NCWRC contained “inaccuracies and misleading statements.” They also said that the person who located the bear, Stephan Pruitt, and HAB were “intentionally” and “blatantly snubbed.”

Their statement also said that, ultimately, it was drone footage from Pruitt that led HAB founder Jody Williams to the cub with the cheesy puff container still stuck on her head.

“Jody texted other members that he had located the bear on the ground, thanks to the drone and that he had contacted Wildlife,” a statement from HAB read. “Therefore-it was NOT calls/responses to NCWRC’s Nextdoor post that led ‘directly’ to the cub!! It was the heroic drone operator and the HAB founder, along with the sightings reported to HAB!!”

They also said in the statement that they’ve had an ongoing history with NCWRC and that they plan on seeking civil and criminal prosecution on specific individuals in NCWRC who they said harassed and doxed them and their cause. They also said they compel officials to launch an investigation into the “corruption within NCWRC.”

In Florida, a 250-pound bear was rescued after getting a plastic container stuck on her head.

The Florida Fish and Wildlife Conservation Commission (FWC) said she spent 28 days with her head stuck in the container. Together, bear biologists, bear contractors, and law enforcement worked together to monitor the area and set traps in hopes of capturing her for rescue.

“Finally, the bear was spotted on a resident’s security camera, still wearing the container on its head,” the FWC said in a statement. “Staff set new traps and started night patrols of the neighborhood. They finally spotted the 250lb female bear just before midnight.”

They were able to dart the bear and remove the container which they discovered was part of an automatic pet feeder. They said the hole in the feeder allowed the bear to still have access to food and water over the 28 days.

After she was monitored for a day and a half, she was released back into the wilderness by staff.

The NCWRC recommends that if you come across an orphaned or injured bear to call your local wildlife office and note the location of the sighting. Approaching the bear can lead to an attack.

Newsweek reached out to the NCWRC and HAB for comment.

Like
Comment
Share
Processing
Voice note recorded successfully
Record
Recording 00:00
Commenting has been turned off for this post.
Sponsored
Categories
Read More
US News
Opinion | Evergrande Isn’t China’s Only Economic Worry
The larger question is whether China can maintain a dynamic economy when its government, under...
By Patabook News 2021-10-20 05:40:02 0 66
Technology
Honor of Kings Developer Tencent Rides Gaming, Advertising Uplift to Beat Quarterly Estimates
Tencent beat forecasts with a 29 percent jump in second-quarter profit, helped by an increase in...
By Patabook News 2021-08-19 00:30:01 0 85
Technology
Over 300,000 MikroTik Devices Found Vulnerable to Remote Hacking Bugs
At least 300,000 IP addresses associated with MikroTik devices have been found vulnerable to...
By Patabook News 2021-12-09 15:35:01 0 48
US News
Mariupol fighters in Russian hands; both sides claim wins – The Denver Post
By OLEKSANDR STASHEVSKYI and CIARAN McQUILLAN KYIV, Ukraine (AP) — Hundreds of Ukrainian...
By Patabook News 2022-05-17 14:00:01 0 6
US News
Halyna Hutchins husband hires law firm specializing in wrongful death lawsuits
The husband of the cinematographer killed on the New Mexico set of “Rust” has reportedly hired...
By Patabook News 2021-11-04 06:40:01 0 75