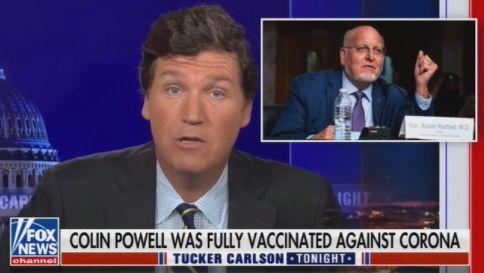 Personalities on Fox News have been slammed for using the death of former U.S. Secretary of State Colin Powell from complications of COVID-19 to question the effectiveness of coronavirus vaccines.

Tucker Carlson, Will Cain and John Roberts each faced backlash for their coverage. Powell, 84, was fully vaccinated but also had multiple myeloma, a blood cancer that attacks the immune system, making him more susceptible to the effects of the virus.

Cain used the news of Powell’s death to rail against President Joe Biden’s vaccine mandates, claim there’d be calls for “more truth from our government” and note that fully vaccinated people are being hospitalized and dying from COVID-19, even though the vast majority of victims now are unvaccinated.

Roberts deleted a widely criticized tweet saying Powell’s death “raises new questions” about the shots, replacing it with a thread saying he was not anti-vaccine.

Carlson, meanwhile, suggested Americans are “being lied to” about the vaccines. He did not appear to reference Powell’s other health issues until the end of his broadcast.

“The man had just died and this guy couldn’t wait to make it into a fight about vaccine mandates. It is disgraceful,” he said of Cain.

This article originally appeared on HuffPost and has been updated.

Like
Comment
Share
Processing
Voice note recorded successfully
Record
Recording 00:00
Commenting has been turned off for this post.
Sponsored
Categories
Read More
US News
Philadelphia Continues To See Surge In Carjackings, Authorities Believe Social Media May Be To Blame – CBS Philly
PHILADELPHIA. (CBS) – Philadelphia continues to see a surge in carjackings in the city. On...
By Patabook News 2022-02-02 22:50:01 0 49
Technology
NASA Shares ‘Sound’ of Butterfly Nebula Created Through Data Sonification
Have you ever imagined what the sound of a nebula in deep space is like? Thanks to NASA, we can...
By Patabook News 2021-11-17 10:35:01 0 54
US News
Swedish Dishcloths sale | CNN Underscored
CNN —   If you’re looking to cut back on your use of paper...
By Patabook News 2021-10-06 06:40:01 0 57
US News
Jimmy Kimmel Spots The 1 ‘Shocking’ Thing About Trump Positive COVID Test Claim
“The only thing shocking about any of this is that anyone would be shocked by it,” the comedian...
By Patabook News 2021-12-02 08:40:01 0 82
US News
CDC clarifies isolation guidance after criticism but still no call for testing
The Centers for Disease Control and Prevention on Tuesday clarified its guidelines around what...
By Patabook News 2022-01-05 04:45:01 0 54