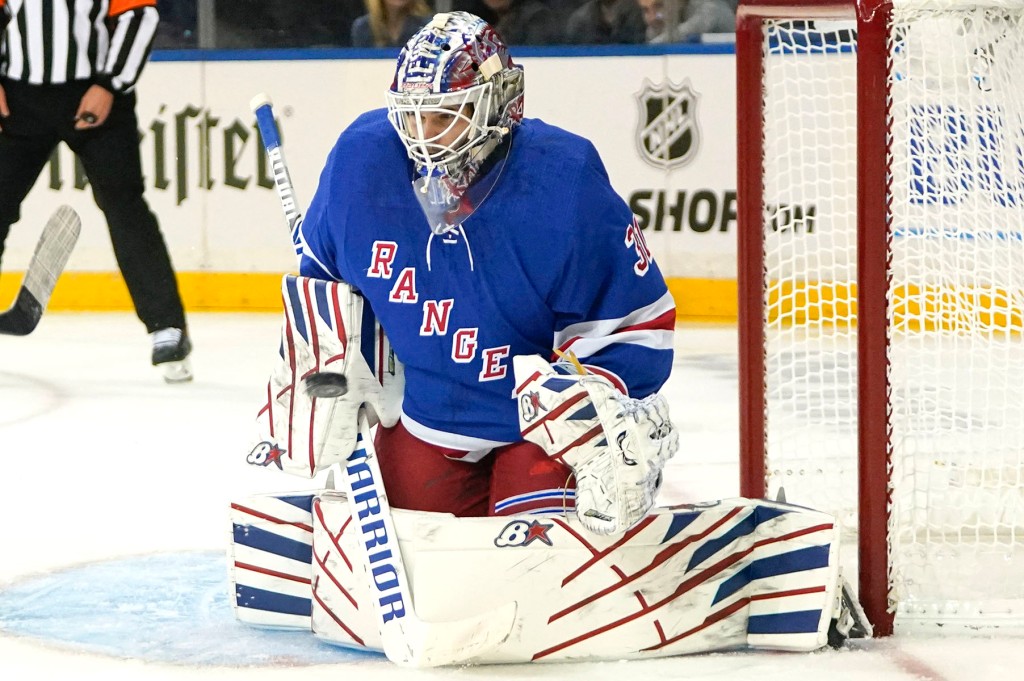 WASHINGTON — While Gerard Gallant has made it clear he will consult Rangers director of goaltending Benoit Allaire regarding how to deploy the team’s goalies, the new coach said he doesn’t anticipate playing Igor Shesterkin or Alexandar Georgiev in many back-to-back games this season — like the first two contests of the season Wednesday and Thursday.

So considering Georgiev got the starting nod in the Rangers’ season-opening 5-1 loss to the Capitals on Wednesday night at Capital One Arena, Gallant said it was a safe bet that Shesterkin will be in net against the Stars on Thursday at Madison Square Garden.

“Obviously, you got back-to-back games,” Gallant said after the loss. “I think Georgie played real well, I don’t think there’s any issue with the goals with Georgie. Shesty will probably play [Thursday].”

Georgiev gave up five goals on 27 shots on Wednesday, three of which came on the Capitals’ power play.

Hunt skated on the fourth line next to Kevin Rooney and Ryan Reaves, while Tinordi slotted in the third defensive pairing to the left of Nemeth. Blais lined up on the third unit next to Goodrow and Filip Chytil.

Gallant said a lot of thought went into the Rangers naming six alternate captains, instead of stitching the “C” on the sweater of just one player. Five of the six players anointed to the Blueshirts’ leadership group are veterans of the team, while Goodrow earned the honor after less than three months with the organization.

“Barclay has won two Stanley Cups recently, he’s a character guy and I got to know him a little bit in training camp, talked to other people, coaches about him,” Gallant said before the game. “It was tough choices obviously and it took us a long while, but he’s a good choice for sure.”

Goodrow, who signed a six-year deal just a few days after the Lightning traded his free agent signing rights to the Rangers in July, won 5 of 7 faceoffs in the season-opening loss. He also posted two shots on goal in 15:33 of ice time.

The 28-year-old Goodrow added it was “a little weird” to watch Tampa Bay’s season-opening game against the Penguins Tuesday night. The Lightning raised their 2020-21 Stanley Cup championship banner during a pregame ceremony, though Goodrow said he hasn’t received his ring yet.

Asked if he was surprised to receive the “A,” Goodrow said he wasn’t.

“I was brought here to be a leader,” he said. “I don’t think a letter on the jersey changes much, I’ll still have the same mindset, still play the same game I’ve always played. Just like to be a guy that can answer some questions from the younger guys and be a positive influence for them.”